Schumer: ‘Everything is on the Table’ to Pass Voting Reform Bill

Schumer: ‘Everything is on the Table’ to Pass Voting Reform Bill 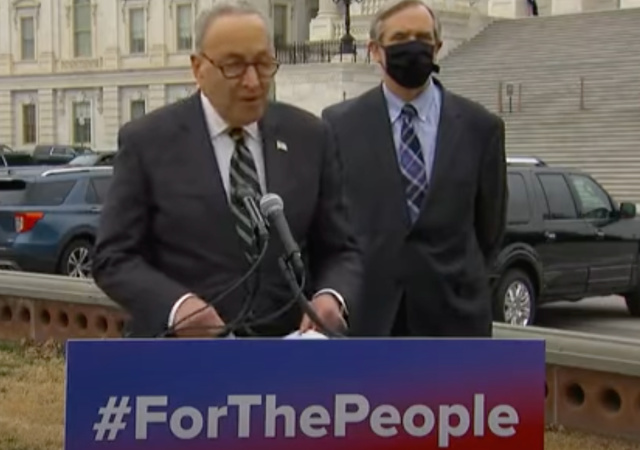 The legislation, also known as S.1, includes provisions that aim to make it easier to register and vote, prevent gerrymandering, improve election cybersecurity and reform campaign finance, among other initiatives.

The bill faces an uphill battle in the Senate, where it would require a minimum of 10 Republican votes to defeat a filibuster and move to a final vote on passage.

President Joe Biden said Tuesday he supports revising the Senate filibuster to require the minority to talk on the floor to block legislation, after previously indicating he did not support efforts to eliminate the filibuster completely.

“This issue is bigger than the filibuster,” said Sen. Raphael Warnock, D-Ga., in his first major floor speech Wednesday. “No Senate rule should overrule the integrity of our democracy.”

“We must find a way to pass voting rights, whether we get rid of the filibuster or not,” said Warnock, who has held onto his role as senior pastor at Ebenezer Baptist Church in Atlanta, Georgia, where civil rights icon the Rev. Martin Luther King Jr. was pastor in the 1960s.

Schumer called on Republicans to join the Democrats: ‘We will see if our Republican friends join us. If they don’t join us, our caucus will come together and decide the appropriate action to take. Everything is on the table. Failure is not an option.”

‘It is not democracy when you disenfranchise people by passing Jim Crow laws. That’s not democracy — that’s dictatorship, and that’s where our Republican friends seem to be going,’ he said.

‘When you lose an election, what you do in a democracy is try to win over the people who didn’t vote for you, not prevent them from voting. That is autocratic, that is anti-democratic. That is anti-American, and it’s nothing short again if despicable, nasty — and in many cases racist,’ Schumer said.

Everything? What you really mean Chuck is that at all costs you will pass the Democrat Election Guarantee bill? Everything on the table means that you will beg, borrow, steal, bribe, commit perjury, falsify documents, etc (you know, like you did in November of 2020).

What should be on the table, Chuck-U, is your head.

Every person in this country should be fighting like hell to stop the Dims from legalizing voter fraud. States should refuse to enforce this law if it passes. And it should be taken to the Supreme Court to be declared unconstitutional.

A we want faster, easier election fraud until hell freezes.

To elaborate. Germany’s 1933 Enabling Act created a one party system in Germany.

The purpose and goal of the Democrat’s “For the People Act” is to create a one party system in America.

Terrible things are about to happen.

It’s the counterexample to Arrow’s voting theorem. A perfect system.

Well I guess you get what you pay for! The GOP had a chance to pass a Stimulus that could r easily bought the two seats in GA. But no it would have cost to much.

All Loftlier did was run the G.D. America attack on Warnock. It destroyed her. People saw it over and over with that dumb shiat saying she approved the ad.

Another “conservative” who wants to give everyone free money when unemployment is barely over 6%, the economy has mostly recovered and the national debt is zooming toward (or perhaps even passed) $25,000,000,000,000.

The GA Senate races were lost as a result of Trump making them all about him instead of drilling home over and over again what would happen to our country if the Republicans didn’t hold at least one seat in GA.

Don’t kid yourself too hard. Those GA senate seats were gone no matter what, the communists were going to steal them and they did.

As I read the final pages of “1984” again, it is all about Power for Power’s sake. These sick sociopaths – let’s be honest here, folks – are on a sick power trip. They will destroy the future of a once great nation just to prove that that can.

They need to be paraded before the nation with signs hung from their necks proclaiming them as “Liar” and “Cheat” and “Corrupt” and then some. Stripped of benefits, forced to wear a big blue D and left to live the rest of their lives in shame.

They have no shame. The Democrats as a party haven’t felt shame since Bill Clinton’s second term.

Is there no way for the joint and several states to nullify this?

Technically yes. That’s why the Left is insistent on our military becoming a “Republican” guard. They want the military beholden to the Party, not serve the Nation.

If States attempt to nullify, they’ll send in their enforcers. If it gets that far.

No, there isn’t. There is no such thing as “nullification” in the US constitution. And at least as far as congressional elections are concerned the constitution explicitly gives Congress the authority to do most if not all of what this horrible bill does. Presidential elections are a bit different, and objecting states might have legal recourse there.

Remember states must obey all valid federal laws; the 10th amendment protects their right not to enforce federal laws against other people, or to assist the federal government in enforcing them, but they have no such right themselves to disobey them.

The only other course open to objecting states is that if they can get both houses of 34 state legislatures to vote for a convention, they can propose constitutional amendments, which would then have to be passed by both houses of 38 state legislatures in order to become part of the constitution. Technically possible, but practically almost impossible.

State executive officials changed state election law with no recourse. Why not implement state procedures in violation of federal law?

Because it’s against the law, and states have a duty to obey the law.

And if they don’t the DOJ, or private actors with standing, will take action against them. Federal law is the supreme law of the land, and state judges are bound by it. That’s what the constitution says.

This is a horrible bill but if it passes it will be the law, at least as far as congressional elections are concerned.

The tenth amendment also limits the federal government to the powers enumerated in the Constitution, giving all others to the States and the People.

There is a pretty naked power play here. It’s a version of the same one being used against the USSC: do what we tell you to do or we’ll strip your ability to do anything in the future.

For the USSC, do as the Democrats tell them to do or the Democrats will pack the court. As we know, the USSC is in the process of caving in to that threat.

For the Senate, do as the Democrats tell them to do or the Democrats will eliminate the filibuster (which Mitch could have stopped in January on the power-sharing rule but let’s not dwell on that now).

If the Dems can’t get 10 Republicans for S.1, they’ll kill the filibuster, and we know Manchin, despite his past statement, will vote for that. We know.

So the real question is, will 10 Pubs cave in the threat of losing the filibuster? I’d count Murkowski, Romney, Collins, Grassley, Burr, Tillis, Portman, and Sasse as voting ‘yes’ in this situation. Toomey and Graham might do so as well. You know, to ‘save’ the filibuster. That gets the Democrats to home.

So I’ll put my nickel on S.1 passing with 60 votes. Anyone disagree?

McConnell tried protecting the filibuster in the negotiations on the power-sharing rule, but Schumer wasn’t budging and the negotiations were going nowhere. That was a losing game for the Republicans, because if push came to shove Schumer didn’t need to share power; he could have grabbed it all for himself, with the help of his 50 minions and the vice president. So when Manchin promised to protect the filibuster it meant McConnell could drop that demand and get other concessions from Schumer instead.

I see no reason to think Manchin will change his mind, but of course he’s a democrat, and thus inherently untrustworthy, so who knows? Either way, though, there was very little chance that McConnell could have done any better.

The absolute fuck he did ? He did exactly what these spineless republican fucks have always done and said some pretty words and then rolled the fuck over like a good chihuahua lap fucking dog ?

Mailman, you are a fucking liar. That is not what happened at all. What happened is exactly what I wrote earlier. McConnell spent several weeks negotiating over this point, and not getting anywhere. The power-sharing agreement was delayed and cause the whole business of the senate to be delayed, and the longer that took the more chance there was that Schumer would just say screw it and take complete power, as his one-vote majority enabled him to do.

If the Democrats muscle HR 1 muscle it through Congress to get it to the Biden the Pretender’s desk, we won’t be voting ourselves out from the mess we find our nation. We’ll be doing the other thing.

We’ll all be well versed in Dr. Seuss if they make the minority party talk for the entire filibuster. Just keep reading the coillection over, and over and over again. Or they can just read the bill on the floor non stop.

They could intersperse some other prohibited literature in amongst the Dr Seuss.

Apparently, we should just make voting an online anonymous poll and be done with it. Kids can vote, aborted babies can vote, foreigners can vote…maybe we can announce the winner on a talent search show.

What Schumer is really saying is: ‘This is what the Politburo decided. That’s it’.

Not that I would call for an assassination or any such thing but, why is this power hungry, elitist ass still breathing?