After serving as Israel’s PM for 15 years, Netanyahu faces the 4th campaign in two years. 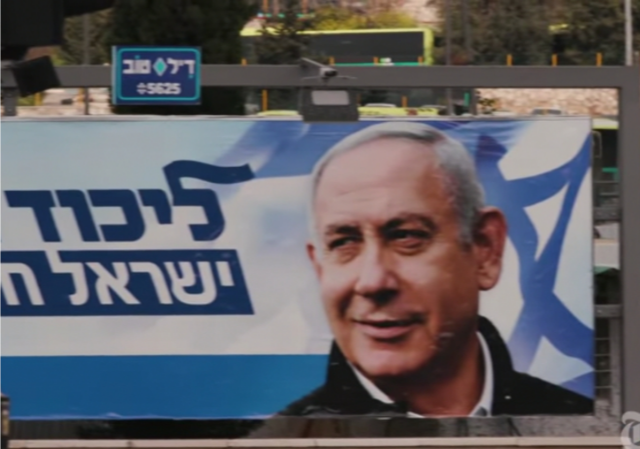 With Israel heading for the forth general election in two years, some of the final polls project a slim majority for Prime Minister Benjamin Netanyahu.

Netanyahu’s party “Likud [is] projected to win 30-32 seats, and to clinch 60 along with declared and potential,” the Times of Israel reported on Friday citing the final polls. To win the election, Netanyahu and his allies will need 61 seats in the 120-member Knesset.

Other Israeli media outlets show Netanyahu-led coalition in a tie or slightly ahead of the opposition alliance. Given the slim margins projected in most of the polls, the election outcome remains too close to predict.

The Times of Israel summed up the projections of the final Israeli polls:

Final polls aired by Channel 12 and Channel 13 Friday ahead of Tuesday’s national election showed Prime Minister Benjamin Netanyahu on the cusp of clinching a ruling majority as the race draws to a close, though he is still not guaranteed one. (…)

Both polls showed Likud and its religious allies at 60 seats, one seat short of a bare minimum majority in the 120-member Knesset. Potential support from the rogue Arab party Ra’am could take the premier over the top, but such an alliance is strongly opposed by the hard right.

In its final projection, the Jerusalem Post saw the polls pointing towards a “deadlock” —  with Netanyahu’s alliance falling short of a clear majority. “The final polls conducted before Election Day on Tuesday all suggested continued political deadlock, as neither the anti- nor the pro-Netanyahu blocs are expected to receive 61 seats in order to form a government,” the newspaper said.

A separate poll conducted jointly by the i24News TV channel and the Yisrael Hayom newspaper showed Netanyahu’s coalition and the opposition tied at 60 seats each.

The i24News reported details of their poll released on Friday:

The latest i24NEWS/Yisrael Hayom poll, which questioned 2,087 adults between March 16-18, showed Friday that both camps would gain 60 seats in the Knesset (Israel Parliament) — assuming that right-wing Naftali Bennett’s Yamina party would join a coalition headed by Prime Minister Benjamin Netanyahu.

Netanyahu’s Likud would secure the top position as the largest party in parliament with 29, the poll showed.

Yesh Atid, led by Opposition Leader and politically-centered Yair Lapid, would come in second with 18 mandates.

In accordance with the Israel’s election campaign laws, no further polls will be release before the March 23 vote.

After serving as Israel’s prime minister for fifteen years, Netanyahu faces probably the toughest election of his political career.

Netanyahu’s main rival, Gideon Sa’ar, hired top operative of the U.S.-based Lincoln Project to ‘advise’ his campaign. Several of the Lincoln Project’s co-founders were roped in to target Netanyahu’s electoral base, a tactic similar to the one unsuccessfully applied by them to divide President Donald Trump’s Republican base in the U.S. election, media reports suggest.

The anti-Netanyahu camp was forced to distance itself from these operatives after a damning sexual harassments scandal engulfed the Lincoln Project in the run-up the election.

During his current tenure, Netanyahu oversaw a historic move towards peace with the Arab neighbors. The Abraham Accords brokered by President Trump established formal diplomatic ties between Israel, and the Arab Gulf States of the United Arab Emirates (UAE) and Bahrain. Several other Muslim countries moved towards normalizing relations with the Jewish State as part of the White House-backed initiative.

Under Netanyahu’s leadership, the former U.S. administration formally recognized Jerusalem as Israel’s capital and as well as its sovereignty over the strategic Golan Height, strengthening Israel’s diplomatic standing in the world and ensuring its territorial security.

Gov. Huckabee at Likud election rally: “Netanyahu is a Churchill in a World of Chamberlains”

This poor guy has to face elections every freaking 6 months !

His rivals aren’t “liberals”. He’s closer to a “liberal” than they are. They’re patriotic right-wingers who have got tired of his lies and double-dealing and treachery.

And the reason there have been so many elections recently is that the public is split; half the country can’t stand him.

Benny is all over the road – one day he is a liberal – the next day he is semi-conservative.

People in Israel have no idea where he stands,

So did the polls at the last three elections, but they turned out to be wrong.

Sa’ar is not his main rival, as Netanyahu has gone to great trouble to point out to the public. If he were it would be a good thing, because in my opinion he might well make a better prime minister than Netanyahu, though hiring the Lincoln Project people showed very poor judgment. So if he had a chance of becoming PM he would be doing better in the polls.

But Netanyahu’s major campaign theme in the last few weeks has been “It’s me or Lapid”. He wants people to believe that the only rival he has is Yair Lapid, who’s unfit to lead a football team, let alone a country, and the polls are responding; he’s pulling votes away from both Sa’ar and Bennett, as people who would be fine with them as PM are afraid that they would join a Lapid-led coalition.

Netanyahu is really not the principled right-winger so many commenters here think he is. Sa’ar, Bennett, and even Yvet Liberman are to his right. He’s an opportunist, and in this campaign he’s gone so far as to pander to the extreme-left Arabs for support. In the last three rounds he was willing to hand the economy over to socialists like Kahlon, Nissenkern, and Abikasis-Levi, just so he could cling to power. That still makes him better than Lapid.

The Israeli Media is more left wing woke than the US media. Especially The Times of Israel whom you quote.

Check out a more Center Right View at Israel Hayom.

Or an actual right-wing view at Israel National News.

Do they have elections every week?