“Another HISTORIC breakthrough today! Our two GREAT friends Israel and the Kingdom of Morocco have agreed to full diplomatic relations – a massive breakthrough for peace in the Middle East!”

Donald Trump announced today that Israel and Morocco will be establishing full diplomatic relations, in another historic diplomatic breakthrough in the Middle East. Morocco joins the UAE, Bahrain, and Sudan in recent announcements of ties between Arab Muslim nations and the Jewish state.

Another HISTORIC breakthrough today! Our two GREAT friends Israel and the Kingdom of Morocco have agreed to full diplomatic relations – a massive breakthrough for peace in the Middle East!

In a likely related move, the United States will be recognizing Morroccan sovereignty over the disputed Western Sahara territory:

Today, I signed a proclamation recognizing Moroccan sovereignty over the Western Sahara. Morocco’s serious, credible, and realistic autonomy proposal is the ONLY basis for a just and lasting solution for enduring peace and prosperity!

Morocco recognized the United States in 1777. It is thus fitting we recognize their sovereignty over the Western Sahara.

The diplomatic relations will come in stages:

King Mohammad says that Morocco will take three moves in the near future. First, facilitating direct flights to transport Jews of Moroccan origin and Israeli tourists too and from Morocco. The North African nation will also seek to “resume official bilateral ties and diplomatic relations [with Israel] as soon as possible.”

Morocco will also seek “to develop innovative relationships in the economic and technological fields. As part of this goal, there will be work on renewing liaison offices in the two countries, as was the case in the past for many years, until 2002,” King Mohammad says.

He thanks US President Donald Trump for recognizing Moroccan sovereignty over the disputed region of Western Sahara, which observers believe was done as a quid pro quo in exchange for normalization. 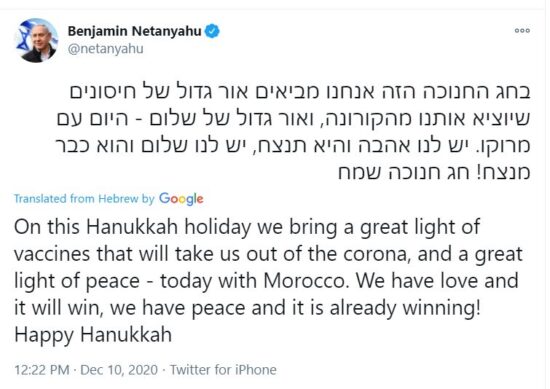 But we are outnumbered by Communist China, who is firmly entrenched within our border, and has bought off Congress (including the GOPe) etc.

The only way Trump can lose is if we let him down and allow Biden to enter the White House on a fraudulent election engineered and sponsored by Communist China and the Soros types.

IIRC, they have been in a state of war with Israel since it declared independence.

yet, i know Jews who claim to support Israel, who voted for Slow Joe & The Ho…

looking at my next door neighbors, for one.

Every single one of my (Jewish) wife’s friends, as well as my wife, consider any Jew who is NOT a left-winger, to be “one of those archaic traditionalist Jews.” Go figure. I sure as hell cannot. Trump has done more for middle eastern peace than anybody I can recall. Just wait, however, Slo Jo and the Ho will have that undone in short order.

I guess “Israel” is a Biden-type “idea”. It’s easy for armchair tribal members in the (increasingly less) comfortable USA to think they are smarter than the “archaic traditionalist Jews”. As things are going, Isreal will be the last bastion, the last hope and the last place on Earth that will accept Jews (religious or otherwise). Being a Dem is literally living in the enemy’s camp. I give you NYC as an example.

Yes, the ones who actually believe in something Jewish — that there is a Creator, Who spoke directly to our entire nation at Mt Sinai, made us His people and gave us His laws, pays attention to what people do and cares whether they do right or wrong, rewards virtue and punishes vice, that kind of outdated nonsense. Without that, being Jewish is simply an accident of birth, so why care about it?

So is she celebrating anything this week? Because Chanukah stands for everything she’s against. As the martyred Rabbi Meir Kahane wrote nearly 50 years ago, If I were a Reform rabbi I would abolish Chanukah.

But John Kerry told me this was impossible.

And it was…. for John Kerry (or any other democrat).

If SuperSpreader Harris is sworn into office, her handlers will destroy these relationships and Israel will again face an existential threat.

Not necessarily. The Dhimmi-crats’ warm embrace of Iran will further solidify the alliance between the Sunni Gulf States and Israel.

I’m not sure this will work. After all, the King of Morocco, like his father and grandfather before him, has always been a friend of the Jews. The problem has always been that the people are not, and the king can’t go against the public or they’ll overthrow him.

Morocco has a long history of antisemitism. The French kept it in check for 150 years or so, but when they left the king was the only one standing between the Jews and the mob, which is why the community diminished so dramatically, from hundreds of thousands in the 1940s, to tens of thousands in the 1970s, to a few thousand today.

This agreement is signed by the king, but will the people accept it? And if they don’t, how long can the king hold out?

As a kid in NYC during the mid 70s I was angry at the futility of the middle-east, the terrorism they had over there and my childhood ignorance and detachment from distant affairs of state. My attitude was, they do not want peace. Now I am seeing peace breaking out in the middle-east. Hey, I hope this PEACE thing is contagious.