It looks like the sexual harassment accusations have not made people forget the nursing home scandal.

But a recent poll from Emerson College/WPIX-TV/NewsNation showed that New York voters have not forgotten Gov. Andrew Cuomo’s role in the scandal.

Overall, 64% of New York voters do not want Cuomo re-elected for a fourth term in 2022.

Only 52% of the Democrats said Cuomo should have a fourth term while 48% said no.

Cuomo job approval in NY is 38% approve & 48% disapprove. 64% say he should not be re-elected. 37% say the sexual harassment claims are grounds for resignation & 34% disagree. 45% think he should resign over handling of covid in nursing homes & 36% don’t.https://t.co/HUAs3bAidD 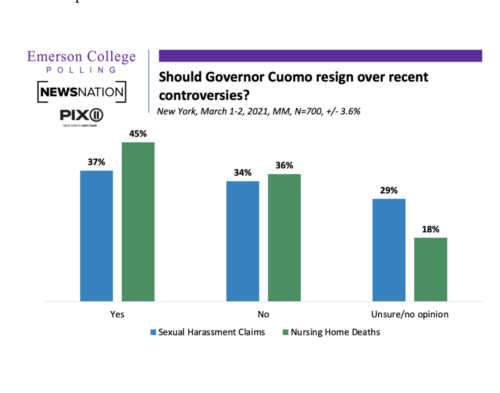 I’m glad people have not forgotten those who died in the nursing homes:

Cuomo has come under fire for covering up for months the true number of nursing home residents killed by the coronavirus from lawmakers and the public because of a federal probe. A top aide to the governor admitted the withholding of information in a private meeting, exclusively revealed by the Post, which obtained a transcript of the exchange.

The fury also centers on a controversial state policy that required nursing to accept recovering COVID-19 patients discharged from hospitals without testing, which critics claim contributed to the death tally. Cuomo and state Health Commissioner Howard Zucker defended their actions.

The sex “scandal” was supposed to distract everyone from his attempt at genocide.

because there are other governors who did the same thing. And if they can take out the most well-known of those for something else, the others may be able to slip away without consequences.

Frau Whitmer of Michigan, for one.

‘Attempt’? He killed more people than che guevara! He did it.

Two reasons to take his scalp and counting.

Sadist Grechen Whitmer is next.

Problem though is in this state the Republicans almost don’t even try. In the last election I met the candidate. Nice guy. Thought he was a campaign worker. I would have to look up who he was in a search engine as I can’t remember his name.

So great. Cuomo touches people and killed grandma. The choice is going to be someone with the same policies and viewpoints that the Democrats are already grooming, and who every Democrat voter will know the name of months before the election, or the sacrificial Republican who will appear, have a small majority upstate, and no votes whatsoever in the New York City metro area.

The way to make Cuomo gone gone is to have someone who seriously threatens the status quo run either as a Republican or if he doesn’t step down or get removed, run against him in a primary.

Since the rule of law has been canceled for such as he, Cuomo might want to start watching his back. Lots of very angry relatives and friends of those grandmas and grandpas…

They NEVER try. They take the easy way out every time – at our expense.

Trump is the ONLY reason to MILDLY trust the GOP. They’re on probation forever.

Now, get rid of that untalented, untelegenic romney retread that is head of the RNC.

The Republican candidate was Marc Molinaro. He was the youngest mayor in the US when he was 18. Good guy, but too nice

So 52% of democrats support a mass murderer…

Genocide is normal for leftists. It’s the end goal. And it continues until they are deposed.

Somebody hold Don Lemon’s beer as he rolls up his sleeves.
There’s still more work to be done here, and it looks like it’s all up to him.

Elaine Chao, wife of Mitch McConnell, said to possibly be in danger of criminal prosecution.

The ABC report is the usual lefty balderdash, full of wild speculation, unsourced rumors, and unsubstantiated claims. Furthermore, the idea that the virulently anti-Republican Justice Department would willingly cover up crimes by the wife of the hated Republican Senate Leader does not pass the smell test.

But the fact that the Joseph Goebbels media is suddenly playing this up is fascinating. It is yet more proof that no matter how eagerly the Franz von Papen Republicans collude with our Communist masters they still have a big fat bullseye target on their backs. This is a clear warning to McConnell: unless you let the Biden* agenda sail through the Senate unmolested, your wife will be prosecuted.

Exactly the same way I read it.

May rinos learn a lesson. Probably not.

Sadly a few other governors should be on this list, no idea why that hasn’t happened.
Emperor Wolf, King Murphy and the wicked witch of the North Gretchen to name a few.

They don’t seem comparable do they? As far as I’m aware those individuals you cite haven’t deliberately hidden a rise in death rate from a policy they have instituted. Unless I’m mistake of course?