Montana Gov blasts Biden: “If making data-driven decisions to reopen … is what a Neanderthal would do, then … count me as one”

Montana Gov blasts Biden: “If making data-driven decisions to reopen … is what a Neanderthal would do, then … count me as one”

Governor Greg Gianforte: “If making data-driven decisions to reopen, loving freedom, and trying to get back to normal is what a Neanderthal would do, then well, I guess you can count me as one.” 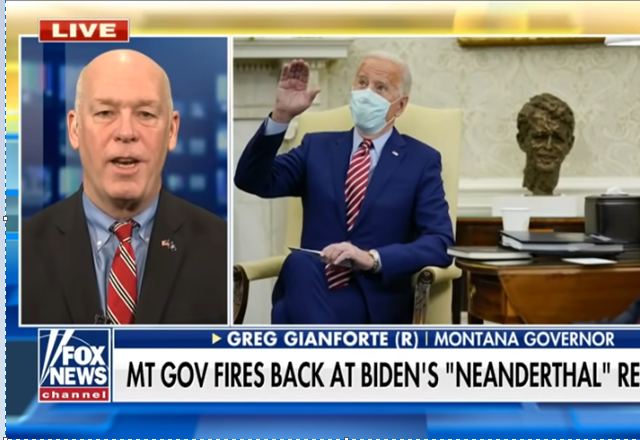 Republic governors are clearly forming state-specific #Resistance strategies in response to actions being taken by the current administration.

We recently reported that Texas Governor Greg Abbott was deriding Biden for current immigration rule changes that were allowing COVID-positive illegal immigrants into the country, despite the fact that legal travelers into the country now have to be tested and confirmed free of the coronavirus before entry. This is in addition to the administration’s “science” based social distancing rules that now allow migrant shelters to operate at full capacity.

When Biden accused officials from Texas and Mississippi of ‘Neanderthal thinking’ over lifting COVID restrictions (based on real science), Montana’s Republican Governor Greg Gianforte said Biden “degraded” himself with his remarks.

Gianforte explained that hospitalizations are down and Montana is “open for business” during an appearance on “Fox & Friends,” asserting that a “one-size fits all” approach to coronavirus mandates “doesn’t make sense” for the needs of every state.

“For a president that called for unity to degrade himself to name-calling, doesn’t make any sense at all,” Gianforte told Steve Doocy.

Gianforte said that by removing the mask mandate and prioritizing resources to those most vulnerable, the state is seeing “great results.”

As an example of the impracticality of continuing mask mandates for the western state, Gianforte added that of the 56 counties in the state, one county is nearly three times the size of Rhode Island with only 1,000 residents.

In fact, Gianforte offered a pitch-perfect response to the trite quip:

“If making data-driven decisions to reopen, loving freedom, and trying to get back to normal is what a Neanderthal would do, then well, I guess you can count me as one,” he said Wednesday on Twitter.

If making data-driven decisions to reopen, loving freedom, and trying to get back to normal is what a Neanderthal would do, then well, I guess you can count me as one. https://t.co/TYmjMuoR8Y

The governor also recently blasted Biden over border security and immigration issues. Gianforte stressed he was concerned for the safety of his state’s communities due to the collapse of border control. The governor cited increasing meth distribution as a real source of alarm.

“In Montana, we are concerned about meth coming across the border. It’s ripping our families and communities apart. And opening these borders back up, it’s just not good for our communities here in Montana.”

Montana law enforcement officials have increasingly encountered meth, former Montana Attorney General Tim Fox wrote in the Independent Record. Fox, who is also a Republican, said the drug is produced in Mexico and smuggled to the U.S. in large amounts, but Montana border units have closed inland screening checkpoints as well as removed resources from the state’s northern border, causing a lack in law enforcement.

“In fact, they have closed immigration checkpoints on highway arterials miles from the border to divert personnel to deal with managing and caring for people,” Fox wrote. “These checkpoints were once instrumental in interdicting illegal drugs, but smugglers now have a clear path to anywhere in the U.S., even Montana, after crossing the border.”

I would like to note that Gianforte may have to make new plans related to population density in the near future. Zoom-work lifelstyles have made his state a more appealing option than it once was.

…Although the data behind the supposed influx of out-of-staters is hard to pin down, it’s an empirical fact that residential home sales in Montana have continued to push upward, and real estate professionals, housing advocates and economists say 2020 saw fundamental changes to the state’s housing market — in part, some suspect, because workers are also discovering that with a computer and internet connection, they can live anywhere.

When looking for the next candidate for 2024, I will be keeping an eye out for those leaders who effectively challenge the current administration on all freedom-crushing policies that are detrimental to Americans. I wish both Abbott and Gianforte a lot of success with their approach.

You just made my morning!!! TY

Yes I’ll count myself as a Neanderthal, too.

I have friends that spent 4 yrs at U of MT. They said people move there every spring and summer thinking they love it but don’t usually last more than two bitterly cold, dry winters before packing up and leaving.

I was thinking the same. Winter up there is no joke.

Ideally, I would love to live in “bear country”, but know I am not suited to it.

Being insulted by Depends Dementia Joe is like being called a deplorable by Hitlery—a validation of your conservative cred.

The flatlanders back east have no idea of the meaning of “wide open spaces” is. It’s not a chunk of asphalt with a basketball hoop.

Republic governors are clearly forming state-specific #Resistance strategies in response to actions being taken by the current administration.

I hope this state level response carries over to other issues… Since DC is toast.

amen–montana has a stark,majestic beauty all its own–the folks have met from there are some damn fine people–tough, independent, hardy–bless them–to live and work in an extreme environment takes a clear head and a stout heart

proud to call them countrymen

Old Racist Joe called the Tea Partiers Barbarians at the Gate, and TERRORISTS. Do you care what a RACIST old puppet of the Regressive party says about anything, when everything he says is gobblygook??

He should dress up as a caveman for his next press conference. 🙂

Well we recall that our New Light Worker Obama said they speak “Austrian” in Austria.

For Shufflin Senescent Joe’s next public appearance he’s going to mumbling in “Neanderthal” and carrying a club.

Is this the same right wing clown who was convicted of assault for body slamming a reporter?

Yeah, it sure as hell is.

Is this the same right wing clown who was convicted of assault for body slamming a reporter?

Yeah, it sure as hell is.

And he should slam more.