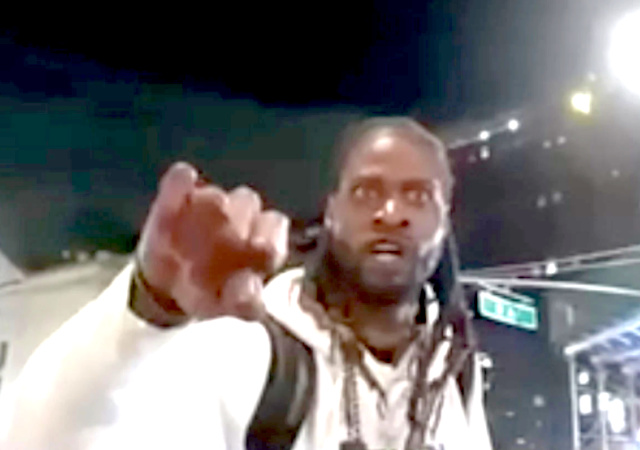 An Asian-American cop’s camera caught a man spewing hateful rhetoric at him during an NYC protest on March 11.

“Suck a dog’s d—k, p—-y. Then cook it and eat it in front of your mother,” the man tells the cop, according to footage of the shocking incident obtained by The Post.

He goes on to tell the officer to have “a goddamn tea party,” before repeating the word “soy sauce” in a mocking accent.

The creep ends his hateful spiel by asking the officer if he was going to put it on the “lunch special.”

The officer chose not to report the incident. He did not think it would “have risen to the level of a hate crime.”

Sources said the NYPD knows this man “as he has been previously arrested on charges of making terroristic threats and aggravated harassment.”

An unhinged Black man was caught on police bodycam video going on a vile, racist rant at an Asian-American NYPD detective during a protest in Manhattan. pic.twitter.com/aZY60E953m

I don’t know that this is an Asian hate thing as much as it’s just another black man screaming at a police officer.

No, it’s an Asian hate thing. In my experience, at least, the only people you hear speaking like this about Asians are black.

While in sane eyes, it ought to take the wind out of the anti -racism machine that the biggest haters are often POC. However these people live in a world of narrative and facts, no matter how hard or how in their face they might be, will never change their mind.

In 2017 CNN reported in an article with the title….

The LA riots were a rude awakening for Korean-Americans

…that in April 1992 following the Rodney King verdict “[l]ong-simmering cultural clashes between immigrant Korean business owners and predominately African-American customers spilled over with the acquittals.”

As Joe Biden would say, “C’mon, man!” We all know that all anti-Asian violence is caused by Donald Trump’s “inflammatory, anti-Asian” rhetoric, blaming the very Chinese people individually, each and every one of them, for COVID19. There’s no such thing as any “long-simmering cultural clashes” between Asian and black Americans. It all started with Trump’s election in 2016. Any suggestion to the contrary is “whitesplaining” due to “white fragility” and :”white woundedness.”

Sort of like all conflict between Islam and the west was caused by the Crusades. It’s the fault of those trashy Euro=weenie white supremacists for invading Muslim lands in the M.E. which they totally acquired peacefully. The first Crusade which the Pope called for in 1095 A.D. is why Muslims in pure self defense invaded Spain and attempted to invade France in response. In, err, 711 A.D. and 732 A.D. respectfully.

Did I mention math is racist? No matter; those invasions of western Europe in the 8th century were a totally justified reaction to the racist christofascist invasions into the Islamic world in the 11th century.

In the spirit of racial equity, I demand to know how Trump’s mean tweets after he was sworn in as President in January 2017 caused black people to attack Asians in 1992.

“Despite the fact that Korean-American merchants were victimized, no one in the mainstream cared because of our lack of visibility and political power,” Chang said. “Korean immigrants, many who arrived in the late 1970s and early 80s, learned economic success alone will not guarantee their place in America. What was an immigrant Korean identity began to shift. The Korean-American identity was born.”

No, no, no, Professor Chang. Korean immigrants did not achieve economic success; just ask Sen. Elizabeth “You didn’t build that” Warren. Koreans who arrived in the late 1970s and early 80s benefited entirely from their white privilege. Privilege being of course the set of unearned advantages our racist society bestows on white people simply because of the color of their skin. And of course those Korean immigrants who immigrated to the US in the latter three decades of the 20th century benefited from their exploitation of blacks as slaves from 1619 through the 1960s until the Democrats passed, entirely on a party line vote and against the racist opposition from those Jim Crow southern Republicans, the Civil Rights Act of 1964.

Those Koreans are white supremacists like their fellow white supremacists, the Jews. Just ask any Ivy League admissions department. They’ve been fighting for social justice and trying to stop those damned white racist KKK supporters from being “over represented” at America’s finest schools (and country clubs) for over 100 years.

Jeeze, another white supremacist. Have him arrested immediately. /s

Minorities as represented by SPLC cannot be held responsible for so called hate speech.

The worst kind of white supremacist too. One with black skin.

One of those multi-racial white supremacists we heard about a while back… Not as rare as we were once told they were.

Just a guess – this guy is no conservative. But he is a fine example of a thoroughly uneducated leftist. Good to know where the real racists live, and that ain’t in my ideological neighborhood.

The officer chose not to report the incident. He did not think it would “have risen to the level of a hate crime.”

I’m a little puzzled by this phrasing. It seems to reflect a popular misconception that there exists some level of hatred that is a crime. But that’s not true. The question here is whether this was a crime; only then can one ask whether the crime was motivated by hatred or by something else. And obviously the answer is that it isn’t a crime.

I’m a little concerned that a policeman, charged with enforcing the laws, doesn’t seem to understand that.

Did you see De Blasio’s latest “advisory” to the NYPD to scold people for their language? That’s probably why he is confused.

“The officer chose not to report the incident because it would have involved filling out a lot of paperwork.” FIFY

He looks like a Trump supporting White Supremacist in blackface.

Can the LI author provide the backdrop for the ‘protest’ please? I’d be curious to who was protesting what.

However, I was struck by the originality of the insults.

Wait, the Dhimmi-crats constantly tell us that black people can’t be racists or make racist statements. Which is total stupidity and nonsense.

Just last 7-10 days black stabbed a kid nearly killing him at Pittsburgh McD’s, possibly poisoned and killed a girl in Miami. burned a guy in NY to death, beat the hell out of and killed numerous Asians in SF. Killed a Uber eats driver in DC, 2 females beat a shopkeeper in Houston. I could go on with more but it’s starting to look like blacks are at war with us. And there are no moderate black voices condemning these daily acts of feral barbarity committed by mostly young blacks against non blacks. The silence from the racial grievance industry is deafening.

And by the way you better show them the utmost respect.

He seems nice. Maybe the Police could consider taking digital photos of the folks at these events and running them through for a match to a name and any outstanding warrants followed by an immediate arrest?

Whatever. Nothing new to see here. Just another mentally ill black spouting nonsense. Happens all the time. Difference is that most of it doesn’t end up on video.