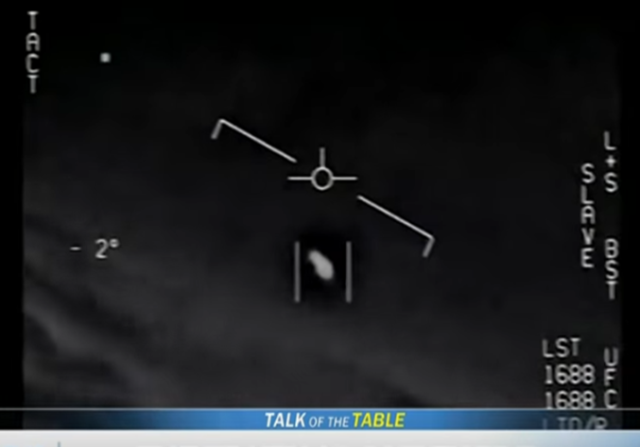 The cockpit audio from American Airlines flight 2292 from New Mexico to Phoenix sounded like something out of a Sci-Fi movie.

“Do you have any targets up here? We just had something go right over the top of us,” a pilot can be heard saying.

“I hate to say this but it looked like a long cylindrical object that almost looked like a cruise missile type of thing moving really fast right over the top of us.”

The radio transmission from Flight 2292 was published on an aviation blog called Deep Black Horizon about the Feb. 21 passenger flight bound for Arizona.

The FBI is aware of the incident but is offering no details on whether there will be a formal investigation.

“The FBI is aware of the reported incident,” spokesperson Frank Connor wrote in an email. “While our policy is to neither confirm nor deny investigations, the FBI works continuously with our federal, state, local, and tribal partners to share intelligence and protect the public.

Anyone who is aware of suspicious or criminal activity should contact their local law enforcement agency or the FBI.”

Interestingly, late last year, a former Israeli space security chief asserted that earthlings have been in contact with extraterrestrials from a “galactic federation.”

“The Unidentified Flying Objects have asked not to publish that they are here, humanity is not ready yet,” Haim Eshed, former head of Israel’s Defense Ministry’s space directorate, told Israel’s Yediot Aharonot newspaper. The interview in Hebrew ran on Friday, and gained traction after parts were published in English by the Jerusalem Post on Tuesday.

A respected professor and retired general, Eshed said the aliens were equally curious about humanity and were seeking to understand “the fabric of the universe.”

…Eshed added that President Donald Trump was aware of the extraterrestrials’ existence and had been “on the verge of revealing” information but was asked not to in order to prevent “mass hysteria.”

“They have been waiting until today for humanity to develop and reach a stage where we will understand, in general, what space and spaceships are,” Eshed said, referring to the galactic federation.

Given all the news that has recently posted on this website alone, I am fairly sure that no invitation to join any intergalactic organization will be forthcoming soon.

So what are they trying to distract our attention from?

Calling it a cruise missile is really giving Cuomo the benefit of the doubt.

Was this a Boeing? It might be more of their software problems.

Why would the fbi care about aliens? Shouldn’t that be a Space Force or Defense department problem?
Or did the aliens conspire with Trump to steal the election and the fbi is going to do another fake investigation and when caught get off with a tiny little “bad boys” admonition?

We know that they will grasp any straw. They cannot stand Trump being an all around better person than they are/

The FBI? Really? Someone’s been watching too many episodes of the X-Files.

Mitt Romney Suffers a Black Eye and Stitches After Fall Over Weekend Knocked Him Unconscious:
https://www.thegatewaypundit.com/2021/03/mitt-romney-black-eye-stitches-fall-weekend-knocked-unconscious/

I am sure that his head was not knocked hard enough to make him become a better person.

It’s reached the point of parody – if it wasn’t so deadly serious.

FBI Director Chris Wray Testifies There Is No Evidence of “Fake Trump Supporters” at US Capitol During Riot:

Romney said “jokingly”, he got the black eye from going to CPAC this past weekend

I think it would have been worse if he had!

I do believe that if aliens contact earth, it will be to destroy us…or maybe see us as a food source, definitely nitly not a partner in the galaxy

Hi Gonzo. Trying to track down contacts from The Trumpet site that’s been disabled. How can we get in touch??

So it was visible to the human eye, but these fast movers were otherwise undetected and did not trigger NORAD to scramble jets? Or are we to believe they radio’ed ahead requesting permission to buzz the tower?

Your comment immediately puts me in mind of a non-metallic hobby rocket. The models have grown to be much larger than they were in the ’60s-’90s and capable of surprising performance. Unfortunately, nobody is saying what the plane’s altitude was or where it ws when it saw the missile (indeed, in just this article, there are two conflicting claims about where the flight originated).

Funny, I used to be a model rocketist (?) when I was a kid. I stubled across a whole lot of modern rockets on youtube.

The thing is that above a certain grade you have to have certain licenses and often preflight approval from the FAA.

Yes, but… if I were intent on targeting an aircraft… let’s just say the launch button works with or without the proper FAA paperwork.

I lost interest in Estes after the first one, then went on to build several real rockets, all solid propellant, zinc-sulfur. The last one was a 4′ engine with a machined steel nozzle and an 18″ telemetry package. I learned a lot building those rockets, and discovered that my telemetry design was hairbrained.

Don’t really get why the FBI should be involved, wouldn’t want them to find a lost dog.

We’ve had a man(?) flying around LAX in a jet pack and harassing jets for the last year or so and from what I can gather, they haven’t found him yet so…

Is Jill collaborating with Hillary on that. Hillary has got to be really pissed that Ho is trying to be the first black female president.

I don’t see anything in their Mission page about tracking down Marvin the Martian and giving him a speeding ticket.

Their Mission: “Protect the American people and uphold the Constitution of the United States”

(Still waiting on the second part of that.)

And their Number 4 Priority: “Combat public corruption at all levels”

(Yeah, still waiting on that one, too.)

Seriously, can anyone explain why this would be something for the FBI to investigate? (Though they did send an entire Field Office to investigate a garage door pull at a racetrack in Alabama.) According to the radar tapes, nothing happened. What crime took place for them to investigate?

Sounds like another America West Flight 564 over Bovina, TX type incident. Taught ‘Significant UFO Incidents from 1945 to the Early 2000’s’ recently for a Senior Adult class.

And what exactly would the FBI do? Heck, they saw voter fraud all over the country and especially in the swing states and did nothing. Never in my lifetime has the FBI been so useless and political.