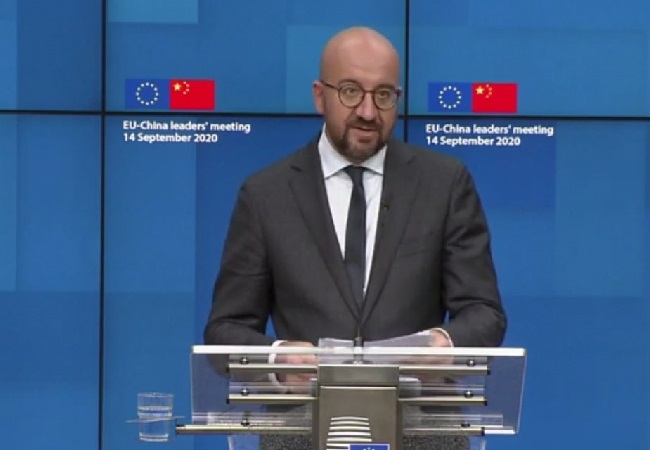 In a historic shift, the European Union has imposed sanctions against Communist China for the first time in more than thirty years. Brussels froze Chinese assets and sanctioned four senior Chinese officials for their role in human rights violations inside China — the first measure of its kind since the end of the Cold War.

“The move from Brussels represents the first punitive measure against Beijing since the arms embargo that the then-twelve member states imposed in 1989 on Communist China due to the violent crackdown in Tiananmen Square,” the French TV network Euronews reported.

The Associated Press reported the details of the EU sanctions:

The EU targeted four senior officials in Xinjiang. The sanctions involve a freeze on the officials’ assets and a ban on them traveling in the bloc. European citizens and companies are not permitted to provide them with financial assistance.

The 27-nation bloc also froze the assets of the Xinjiang Production and Construction Corps Public Security Bureau, which it describes as a “state-owned economic and paramilitary organization” that runs Xinjiang and controls its economy.

British Foreign Secretary Dominic Raab said the measures were part of “intensive diplomacy” by the U.K, the United States, Canada and the 27-nation EU to force action amid mounting evidence about serious rights abuses against the Uyghur Muslim people.

The Reuters news agency described the significance of the EU measures: “While mainly symbolic, the EU sanctions mark a significant hardening in the bloc’s policy towards China, which Brussels long regarded as a benign trading partner but now views as a systematic abuser of basic rights and freedoms.”

China on Monday said it had decided to impose sanctions on 10 European Union citizens, including politicians, for “gross interference” in its internal affairs, and for “flagrantly violating international law.”

In a statement, China’s Ministry of Foreign Affairs announced it would endorse sanctions against the individuals and four EU entities for “maliciously spreading lies and false information.” (…)

Beijing said it will also sanction EU entities including Germany’s Mercator Institute for China Studies and a Danish democracy organization.

The hardening of the European stance comes just days after Chinese officials made insulting and provocative remarks at the U.S.-China summit in Alaska.

Besides typical Marxist clichés of portraying the U.S. as an imperialist bully, the Chinese delegates accused the U.S. of “deep-seated” racism. Black Americans were being slaughtered across America, top Chinese diplomat Yang Jiechi claimed at the summit, referencing the fringe Black Lives Matters movement.

President Joe Biden’s administration downplayed the Chinese delegates’ despicable behavior at the Alaska summit — with one Biden official describing the disastrous talks with the Chinese as “substantive, serious and direct.”

True to their character, Chinese Communist officials reacted to the EU sanctions by hurling ugly insults at the Europeans.

Unlike Biden, France responded firmly to similar Chinese slurs directed at the French.

“France’s foreign ministry has summoned China’s ambassador over repeated insults and threats aimed at French lawmakers and a researcher and a decision by Beijing to sanction officials across the European Union,” the France24 TV network reported.

Even the tiny Netherlands summoned its Chinese envoy over Beijing’s behavior, Reuters reported.

The weak response from the Harris administration is a direct result of having a senile old man at the top. There is no direction from the guy who doesn’t even remember he’s the president a large part of the time. As long as he’s the figurehead, no one else can step up and take charge.

IOW, without a strong leader, we have weak leadership.

While human rights violations are nothing to sneeze at, this is just virtue signaling only and will have zero impact.

Wake me up when the Europeans actually take a stand against China’s international misdeeds in regards to state-sponsored theft and espionage.

Wake me up when WE do.

You all going to be getting lots of rest.

Rhond romney needs to be shown fhe door, or we’re going be in hell very soon.

China knows that Biden won’t stand up to their human rights violations or their aggression. I expect the Chinese will recognize that this is an ideal time for them to retake Taiwan. It will be interesting to see if the EU is willing to stand up to China while Biden is doing nothing.