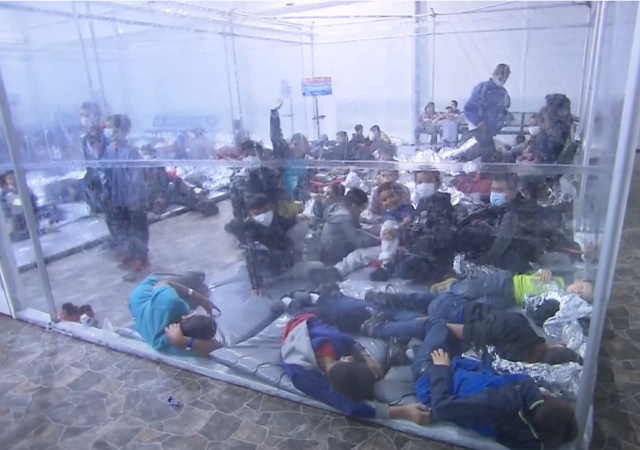 The holding facility has 4,100 people, including 3,200 unaccompanied children.

We already know the facility has too many people, thanks to photos from lawmakers. But now the administration can no longer deny any problems.

Officials made the capacity 250 during the pandemic. Before the virus, the facility could only hold 1,000 people.

No matter what, the facility is way over its limit. The pods can only hold 32 people. Each one has 500-600 people.

The Biden admin allowed pooled coverage for the first time.

We saw a “pod” designed for 32 migrant children under CDC guidelines now holding 615.

The facility is at 1700% pandemic capacity.

The outdoor recreational area is being used to stage COVID testing before unaccompanied migrant children are transferred to HHS facilities.

We counted more than 50 COVID positive (and largely asymptomatic) kids waiting for their quarantined bus right next to a soccer game. pic.twitter.com/QYRe5ncF46

The legal limit is 72 hours. pic.twitter.com/UUe3HQHYjE

On Tuesday, journalists watched children being processed. They went into a small room for lice inspection and a health check. Their hair was hosed down and towels were tossed in a black bin marked “Lice.” The kids — many of whom have made long journeys to get to the border, including stretches on foot — were also checked for scabies, fever and other ailments. No COVID-19 test was administered unless a child showed symptoms.

Nurse practitioners also gave psychological tests, asking children if they had suicidal thoughts. All shoelaces were removed to avoid harm to anyone.

The children were then led down a green turf hall to a large intake room. Those 14 and older are fingerprinted and have their photo taken; younger children did not.

They went to a second intake room where they got notices to appear for immigration court. Border Patrol agents asked them if they had a contact in the U.S. and allowed the child to call that person.

Children were given bracelets with a barcode that shows a history of when they showered and medical conditions.

The press is given access to a migrant processing plant in Donna, Texas, and Border Patrol agents brief reporters on the plant's conditions. @HeatherChilders @CortesSteve https://t.co/VlT7z8drtO pic.twitter.com/4W9CE3a6NS

Send them all home. If they manage to hide where they’re from, drop them off on cape horn.

“Sure, lady, I walked all the way from El Salvador so I could cross the border and then off myself.”

Old and busted: Kids in Cages
New: Tots in Tupperware