“Instead of Comic-Con, San Diego gets COVID and ‘kids-in-cages’.” 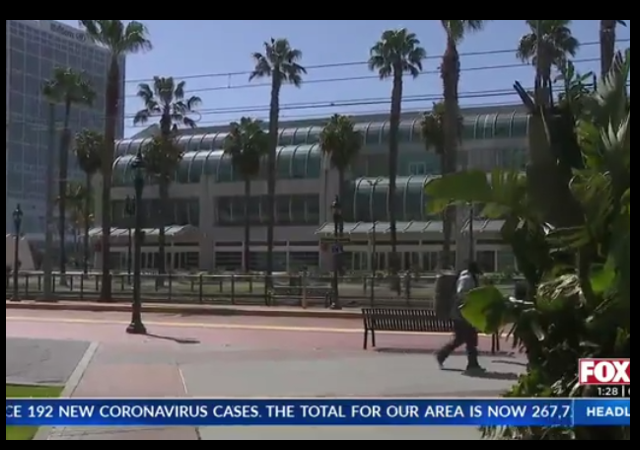 Legal Insurrection readers may remember I am fan of San Diego’s Comic-Con, which I was hoping would reopen this year.

Sadly, the event that is held in the city’s Convention Center has been postponed due to fears of COVID-19.

For the second consecutive summer, fans of comics, popular culture and the wide world of entertainment showcased at San Diego Comic-Con will have to do without an annual in-person gathering. Comic-Con International, the organization that runs SDCC, announced today that Comic-Con 2021 will be postponed until summer, 2022.

A three-day Comic-Con @home online event will take place over the summer, and the organization said it is hoping to do a smaller event later in fall or winter.

Despite reliable reports that illegal immigrants surging across the border are infected with the coronavirus, the Biden officials are now directing the unaccompanied children to the facility and the city officials have agreed.

The Biden Administration is partnering with San Diego to turn the city’s convention center into a temporary shelter to support unaccompanied children seeking asylum in the United States.

San Diego Mayor Todd Gloria and San Diego County Board of Supervisors’ Chair Nathan Fletcher said Monday that Health and Human Services Secretary Xavier Becerra “requested our help to house some of the unaccompanied minors at the border,” saying they “knew it was the right thing to do.”

“Over the weekend, we agreed to open our Convention Center to the federal government for use as a temporary shelter,” they said in a joint statement. “The City and County will support this federally funded effort by providing vital services to these vulnerable children who came to our country seeking safety.”

The added: “We are working closely with our federal partners to finalize the details for preparing to receive these young people and provide them with care, compassion and a safe space to transition while they are reunited with families or sponsors.”

The facility is in the heart of a once-thriving downtown area. The Convention Center is also near PetCo Park, which is due to being its Opening Day of baseball season on April 1. A surge in crime and disease will certainly put a hamper on businesses trying to recover from the prolonged pandemic restrictions.

Ironically, it was only a few weeks ago Mayor Gloria was imposing robust restrictions on the city’s businesses out of fear of the coronavirus.

The newly elected Mayor of San Diego’s first order of business is to recruit the police to shutdown and fine hardworking business people, and San Diegans are outraged.

Mayor Gloria said he directed the San Diego Police Department, and asked the City Attorney, to “pursue fines and potentially other enforcement actions against public nuisances who choose to endanger the lives of others, and blatantly and egregiously defy the provisions of state and county public health orders.”

As if that was not bad enough, the San Diego Convention Center had been used as a homeless shelter due to the lack of conventions because of the pandemic. The homeless, mainly Americans and many of them veterans, are now being given the boot.

The shelter, officially known as Operation Shelter to Home, opened April 1 last year and at its peak accommodated about 1,300 people in separate areas run by the Alpha Project, Father Joe’s Village and Veterans Village of San Diego. VVSD no longer oversees any clients at the shelter.

Wood and other Father Joe’s clients this week will move out of the shelter and into Golden Hall at the San Diego Concourse. Alpha Project clients will move into two large tented shelters in downtown San Diego.

Dawn Wildman, the Director of the Coalition for Policy Reform and a San Diego citizen activist is says the decision has created much anger and frustration.

“San Diego residents are angry, as are many southern Californians who will also bear the consequences of the border collapse. Clearly, the officials who agreed to this are not making their choice based on what is good for the community or its legal citizens and residents. Instead of Comic-Con, San Diego gets COVID and ‘kids-in-cages’.”

You can't open your restaurant to half capacity and your kids can't go to school, but you can pack the convention center full of illegal immigrants. When do the people of San Diego come first? https://t.co/pzPmuldHem

I will say this: When it comes to disastrous immigration policy, Biden and his minion Becerra are over-achievers.

And have fun with the great question…If hotels are good enough for illegal immigrants, why was the DC Guard sleeping in parking lots?

My 19-yo son came over for a rare visit yesterday. He laughingly told us that his roommates and just about everyone he knows his age voted for Biden. And now they are all regretting it – their gasoline prices have risen, they are still banned from the “normal” college life, their students loans are not being forgiven, and now there are MORE kids in cages, not less. They are ticked at Biden.

Wait till they get their fill of Harris.

Is he having fun telling all his dormies, “I told you so?”

A variation on when a young person gets that first paycheck and sees how much the government confiscates.

Best to learn one of the hard lessons in life early–at age 19 like Morning Sunshine’s son. The lesson—most politicians are lying scum; the subsidiary lesson is that Joe Biden is scummier than most. He’s got a track record to prove it.

All illegals are not collectively worth one American life, unless those American lives happen to be Dems.

A bigger, better cage.
at the end of the day,
is still a cage.

Yep. And the left knows that. They aren’t upset now because they weren’t upset then. They just saw a way to blast President Trump; they have zero concern for any illegal alien. Need proof? Just look at how they excuse, downplay, and obfuscate the actual border crisis created by Team Biden. Empathy or concern for children or whatever they bleated about is now revealed as an obvious partisan lie. That’s something, I guess.

Now wait for WuFlu outbreaks to skyrocket in the (mostly red) states into which Biden’s team is dumping WuFlu-infected illegal aliens. And then the media will blame red state leadership, completely ignoring the Biden influx of plague-ridden illegals.

Does anybody recall how much time and money it took to clean up the Superdome after it was used as a shelter after Katrina? SD better be prepared for the cleanup after Covid infested illegals are housed in their convention center.
.

Next it will be individual families that will be forced to house immigrants. The Democrats will have no limits to forcing their agenda.