Life as a Trump-supporter in a world of #TrumpDergangementSyndrome 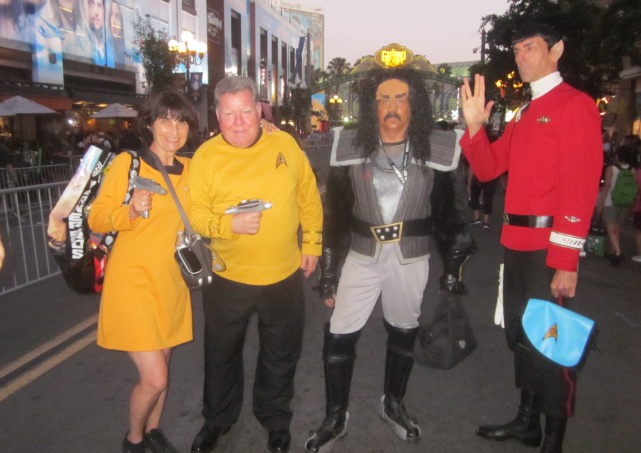 I was thrilled to be able to get in touch with my inner geek this week as I had the opportunity to join one of my dearest friends at San Diego Comic-Con 2018.

While I had hoped to escape politics while I was at the Convention Center, the inability of progressives to move to the next stage of the Kubler-Ross grief cycle meant that it was thrust upon me at various times.

Due to our desire to avoid long waits and glitterati-filled panels, I missed one of the most blatant demonstrations against President Donald Trump. The panel for Fantastic Beasts: The Crimes of Grindelwald was punctuated with a few unnecessary political comments.

When the cast of Warner Bros.’ Harry Potter prequel was asked what they would do if they had magic in real life, costar Zoe Kravitz (who plays Leta Lestrange) shot back: “Impeach Trump!” That was met with plenty of cheers in the room, though apparently, not everybody was on board:

FANTASTIC BEASTS cast says they’d use real-life magic to impeach Trump. Joke about impeachment spells. Guy behind me is PISSED. “They had to ruin it.”

Since he’s good at making up spells, the cast then turned to Dan Fogler and asked him what the spell would be called. He responded: “Impeachius Maximus!”

How was #TrumpDerangementSyndrome-based magic received? Those who support our President remained silent, out of the desire to not add political fuel to the fire.

There was much Trump Derangement Syndrome at the comic-con panels I attended yesterday. But while the virtue-signalers cheered LOUDLY as the actors & writers gave their rants, I looked around and most of the attendees sat QUIETLY, arms folded. Very reminiscent of election 2016

Next-up, there was an announcement during another panel that the cartoon comedy Family Guy target President Trump in the upcoming season.

“We have a two-part episode this season where Peter goes to Washington to work with Donald Trump.” ???????????????? – Rich Appel#FamilyGuy #SDCC pic.twitter.com/lGtEYOQagu

In the Trump episode, the President selects Peter as his new White House Communications Director after learning that the Quahog Brewery shipping clerk is an expert seller of fake news. As a result, the Griffins pack up and move to Washington D.C., only for Meg to have an “unfortunate encounter” with POTUS that results in him getting into an “epic battle” with her father.

I’ll give that show a hard pass.

On a more personal level, my exposure to politics occurred mainly when I attended a panel called “Women on the Dark Side”. What I thought might have been an intriguing discussion on female villains or the Gothic reads women love, it almost veered into #TrumpDerangementSydrome, as the moderator and 2 of the panelists referred to the current political climate as scary, horror-filled, and dark.

Fortunately, the organizer of the panel managed to redirect the discussion into politically neutral territory. However, the ensuing discussions celebrating diversity ended up targeting white men….for the simple reason they are successful, white men. While I appreciate the desire to promote all sorts of authors, there are actually white men who are outstanding writers and deserve recognition.

Finally, during a tour of the Main Floor, I came across a publisher hawking what must pass as clever political commentary in this environment: 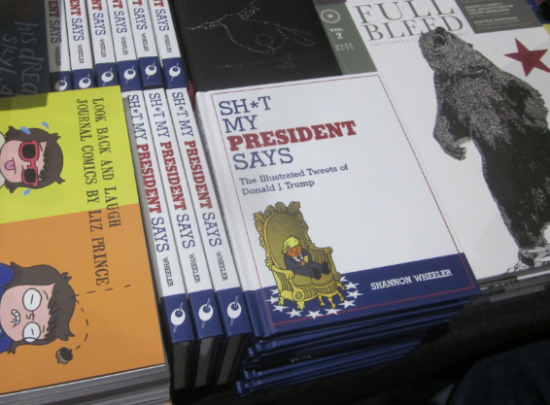 It appears that this book is not selling terribly well and may be one of the few products that is failing in the Trump economy.

In fact, most of the recent offerings that have been unsuccessful in the Trump era are from Hollywood!

I plan to write the organizers of Comic-Con to register my politically incorrect opinion this year. If they want to turn their event into a political convention, at least be honest about it. Then the panels will receive my robust, fact-based opinion during the questions section.

Meanwhile, I hope all my friends at Legal Insurrection live long and prosper!

The SJWs are ruining Comic Cons. Here is Larry Correiara’s latest on the Origins Con Witch-hunt:

The only “drama” that follows Larry is that manufactured by left wing activists who are frustrated beyond belief that they can’t bully him into conforming to their whacked out standards.

I went to Origins, because I’d promised Paizo, and our local lodge I’d run games. I proudly wore my MHI hat all three days I was there, and explained to any Larry Correia fans who were curious about the hat what happened with Origins. I also walked the vendor floor. and none of the brave SJWs who were loud mouthed about the issue ever saw me apparently. At the end of the Con I told Tonya Wooldridge (the head of Paizo’s OP) why I was wearing the hat and that this likely would be my last Origins.

Unfortunately I didn’t get my goal of a picture with John Ward while wearing the hat.

Everybody should read the Monster Hunters International series that Correiara wrote, just to rub the Left’s nose in it. (And, the series is exciting and funny).

That actually looks kind of fun.

I admit that I actively avoid Family Guy as a matter of sense and taste and have for its entire run. I think I have just saved a bunch of money by dropping any plans to see, or buy anything related to, Fantastic Beasts.

Haven’t been to Comic-Con in nearly 20 years, and even then I was mostly there for gaming.

But I must say, that was a lousy Impeaching spell. I’d probably go with “Dumpus Trumpus”.

Cons have always been hard core loony left. Did you not attend any cons during the Bush years? It was the same thing.

And they’ve been a dumpster fire since their very inception. Look at it this way – at least this is preferable to all the rape and child molestation that used to go on.

I attended Comic Con once in the 80’s and Dragon Con in 1990. I don’t recall either of them being overtly political.

As someone who was and is involved in conventions (including founding one back in 2000 in Atlanta), it didn’t get loony until 2002 – 2003, when the Iraq War and BDS took hold. Now, I only go to one convention a year.

Leslie… look out at the Marina. After sailing from Seattle down to Mexico and then out to Hawaii, my wife and I returned to San Diego and lived on “H” dock there at the Marriott Marina for 2 years onboard our sailboat. Great living right downtown and the hotel considered us guests and even offered room service to the boat. Even then we always looked forward to Comic con at the Convention Center. Fun stuff!

Good to know more LI peeps are in the crowd!

Is that guy with the phaser William Shatner?

No. He probably wishes he was though.

Someone should tell that lady however that she’s liable to shoot herself with her phaser. Someone didn’t pass the part of phaser 101 where they show you to point it at the enemy and not yourself.

I mostly buy Bean books now . Most of the rest is trash.