Event may be heralding a start to a new cycle of regional volcanic activity. 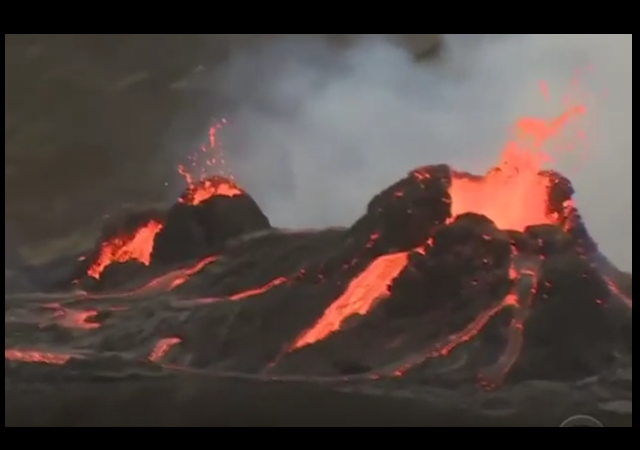 Two weeks ago, I reported that over 18,000 earthquakes had rocked an area of Iceland between the volcanic peaks of Fagradalsfjall and Keilir, indicating the long-dormant volcanic fissure system there was poised for an imminent eruption.

As projected, that eruption has occurred.

The eruption on Reykjanes Peninsula, which began around 8:45 p.m. local time (4:45 p.m. ET) was seen on a web camera and later confirmed, the Icelandic Meteorological Office said in a statement.

“The eruption is considered small at this stage,” it said on Twitter, estimating that the fissure was around 500 meters, or 1,640 feet, long. While a distinct orange glow could be seen in the low cloud on the peninsula.

Early Saturday, the Meteorological Office said the “volcanic activity has somewhat decreased,” and the “lava fountains are small.”

Fortunately, the experts were correct in assessing that the eruption would be a fissure event, which is when the lava flows through a linear volcanic vent, usually without any explosive activity. Therefore, the impact will be mainly local. Still, the eruption could still be see in Reykjavik, 20 miles away.

The eruption took place about three miles inland from the coast and poses little threat to residents. They were advised to stay indoors with windows closed against any gases that are released.

This is the first eruption in the Reykjanes Peninsula in nearly 800 years, the Associated Press reported. Thousands of earthquakes took place in the weeks leading up to the eruption, the meteorological office reported. Earlier this week, swarms of earthquakes rattled the peninsula, with over 3,000 quakes on Sunday alone. The strongest tremors took place around Fagradalsfjall Mountain.

The local newspaper in Keflavík just posted this photo of the glow from the volcanic eruption that just broke at Fagradalsfjall in Þráinsskjaldarhraun. I pity the newsreaders of the world. #icelanderuption #icelandvolcano #gos pic.twitter.com/o5x4QxvPcV

And while the scale of this eruption may be limited, the event may be heralding a start to a new cycle of volcanic activity on this island nation.

Scientists are now preparing for what could be decades of increased activity: they have observed that the volcanoes in southwestern Iceland become active approximately every 800 years, and that eruptions can then occur for up to 200 years.

For the first one, however, volcanologists and seismologists have said for weeks that they did not expect activity on the order of the 2010 quake at the Eyjafjallajokull volcano, and that the looming eruption would probably bubble out without much explosive force.

“People in Reykjavik are waking up with an earthquake, others go to sleep with an earthquake,” Thorvaldur Thordarson, a professor of volcanology at the University of Iceland, said in an interview this month. “There’s a lot of them, and that worries people, but there’s nothing to worry about, the world is not going to collapse.”

Additional good news for Iceland: The eruption isn’t generating the fumes associated with the 2010 event, so air traffic in the region remains normal.

“There is no indication of production of ash and tephra, and there is no imminent hazard for aviation,” the Met Office said on its website.

In 2010, an eruption of the Eyjafjallajokull volcano in Iceland sent clouds of ash and dust into the atmosphere, interrupting air travel between Europe and North America because of concerns the material could damage jet engines. More than 100,000 flights were grounded, stranding millions of passengers.

Well, duh to the max, txvet2! Of course this is climate change and stuff that human beings simply being alive makes this stuff happen. Duh!

What we need right now is the end of cow farts (and probably human farts, too, how can that be good?) and also the end of people breathing. We need to organize mass riots, looting, arson, vandalism, murder, and mayhem for Mother Earth.

You do know that every study known to man since the beginning of studies known to man have indicated that persons exhale CO2. That is a deadly, climate-killing agent that, incidentally cows fart, I think. I don’t know that part for a fact, but I know cow farts are bad because AOC told me so.

Oh, and we should all be eating Monsanto soy-based fake meat to minimize the climate catastrophe caused by farting cows.

Stop laughing, you climate denial lunatic! Of course you scoff at science, but I am on Twitter and I comment on BLOGS, so I know more than you about ACTUAL science. Obviously. So there.