‘You Will be Destroyed’: Cuomo Trashes NY Lawmaker in Private and Public Over COVID-19 Nursing Home Deaths

‘You Will be Destroyed’: Cuomo Trashes NY Lawmaker in Private and Public Over COVID-19 Nursing Home Deaths

“You have not seen my wrath. I have been biting my tongue for months.” 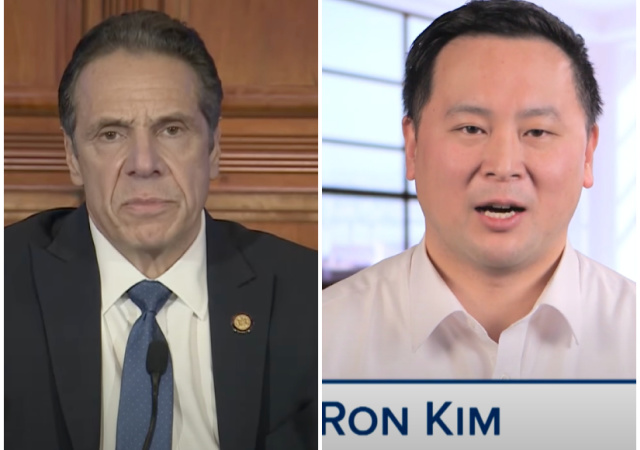 It is not hyperbole when I say that New York Gov. Andrew Cuomo has lost his mind.

Cuomo threw out “unfounded allegations” against NY Assemblyman Ron Kim (D-Queens), who has accused Cuomo “of obstructing justice by covering up nursing home deaths from COVID-19.”

Cuomo once again deflected blame by placing it on The New York Post.

In regards to that revelation, Kim told The New York Post that he thinks Cuomo “was trying to dodge having any incriminating evidence.”

Kim contacted The New York Post on Wednesday about a phone call he received from Cuomo after he provided the above quote:

“At first, there was a silence on the phone,” Kim said. “Then the governor says, `Mr. Kim, are you an honorable man?”

Kim — who said he was “in the middle of bathing my kids” — said Cuomo asked him to draft a statement “to say that Melissa de Rosa said there was a federal investigation and they had to deal with that first.”

During the conversation, Kim said, Cuomo warned him, “You have not seen my wrath. I have been biting my tongue for months.”

“I can tell the whole world what a bad person you are and you will be finished,” Kim recalled Cuomo saying.

“You will be destroyed.”

Kim’s wife could hear Cuomo screaming at her husband. Kim said she did not sleep that night.

Kim also said Cuomo called his house four or five more times. No one picked up the phone.

Cuomo kept his word when he went after Kim during Wednesday’s press conference:

During a telephone conference call at which he declined for a second time this week to take questions from The Post, Cuomo said he and Assemblyman Ron Kim (D-Queens) have an “open and hostile relationship” that goes back to legislation enacted in 2015 to regulate nail salons.

Cuomo claimed Kim initially supported the measure, “then flipped 180 degrees” because “businesspeople in his community got upset.”

“He actually used his lobbying firm to lobby on behalf of the business owners … then raised money from those business owners and continues to do so,” Cuomo further alleged, regarding the six-year-old measure.

Cuomo added that “the euphemism is ‘pay to play’” — the same sort of scheme for which a top Cuomo aide, Joseph Percoco, was convicted on federal corruption charges.

“As legislators we have a duty to uncover the truth behind the nursing home deaths and the governor’s explanations do not add up,” said Kim. “While he claims he was taking time to answer the Justice Department, we saw him gallivant around on a book tour and victory lap across prime time cable shows. Again, all while his top aide deliberately hid the information in fear of political and legal consequences.”

Kim added: “The governor can smear me all he wants in an effort to distract us from his fatally incompetent management. But these facts are not going away because they are the facts – unacceptable facts that hold him accountable.”

The New York Post published the comments from de Rosa, which has brought Cuomo’s wrath.

Cuomo has not taken the publication’s questions for two weeks but took time to trash the outlet:

The governor also accused The Post of pushing “the Republican point on nursing homes” regarding the state Health Department’s since-rescinded March 25 order that required the facilities to admit COVID-19 patients discharged from hospitals.

“They conveniently leave out, the March 25 order was done following guidance” from the federal Centers for Disease Control and Prevention and the Centers for Medicare & Medicaid Services, he said, ignoring the difference between broad guidelines offered to states and a mandate from his Health Commissioner Howard Zucker to the facilities.

“If we did believe it was wrong, we would say we believed it was wrong and we made a mistake following CDC and CMS guidance,” Cuomo said. “And then I would sue the federal government.”

Cuomo further accused The Post of refusing to retract critical comments from Kim regarding DeRosa’s recorded remarks, claiming Kim told him in a private conversation in which Cuomo confronted the assemblyman, “The Post misquoted me.”

Son fo Mario the Pious might end up eating those words.

I wouldn’t lynch a black man myself, just for flirting with my daughter. I object to that sort of thing. But other people evidently feel differently about it, and it wouldn’t be right for me to stop them.

Cuomo is a disgusting tyrant. He needs to be taken down hard.

He’s not the only one either. Frau Whitmer, Wolfe, Buckteeth Murphy and a few others need to be taken down as well.

I could almost hear a horse neighing when I read “Frau Whitmer”.

I think that it is Cuomo who will be destroyed. I also think that Cuomo knows this.

Nah. Check out the tell:

“You will be destroyed.”

He’s just auditioning for a spot in Jen Psaki’s department.

You would know, Cuomo.

Well Governor, if you really, really believe he is engaged in illegal activity, don’t you sort of have a duty? To intervene, to have a criminal investigation started, something? Or just bluster?
Governor you bluster really, really well.

No, that would be the attorney-general’s duty. And she doesn’t work for him.

They never have been. She’s got her eye on his job.

Governor, “The Godfather” is not an instruction manual.

if that is a current picture of Cuomo, he has aged drastically in the last 12 months.

I hear a life of lies and wickedness can bring on that kind of stress.

I have. Obama aged dramatically in his first 4 years even. Cuomo though… he looks… haunted? maybe? Like he is not getting any sleep as he tries to find a way out of his consequences

Theory is that the job carries a constant high adrenalin level and that ages them. As for Biden…. since he lives in a la-la land I doubt he is overstressed since his staff needs to keep the lid on until Harris can get a shot at 10 years.

Except for Trump. He is the only President who didn’t age!

You know, I haven’t checked the photos, but you may be right.

NEVER ignore when someone in power says “I will destroy you”. Remember, President Susan Rice (she IS the de facto president, folks)was just “fired” (meaning, transferred to a higher paying job) for saying threatening the same).

Genocide has a roots that must first take. They’re taking.

CORRECTION. This should read:

NEVER ignore when someone in power says “I will destroy you”. Remember, President Susan Rice (she IS the de facto president, folks)was just “fired” (meaning, transferred to a higher paying job) one of her press secretaries for threatening the same).

You can be sure the ass’t press secretary said what he did at the behest of president Rice’s office. They’re just testing the waters, getting the public used to horrifying threats. Then later, carry them out.

When I see people in authority act like this, I always say the same thing – and it applies equally to Democrats, Republicans, or anybody (although Democrats are FAR more prone to it).

When you see somebody act this blatantly and arrogantly, it means that they have done this exact same thing many times, AND IT HAS ALWAYS WORKED.

Cuomo personally harassed and threatened another Democrat without a hint of hesitancy. He’s clearly done this many, MANY times, and it’s always worked.

The only thing shocking about this is that it’s being reported and made public.

I’m not normally a violent man. But, nothing would please me more than for Kim to haul off and just get Cuomo. Knocking flat on his behind.

Even better, take the good governor on a boat trip to go fishing.

Should Cuomo be say Hail Mary during the trip.

Honestly, I think Cuomo could take Kim, but I hope someone comes to take Cuomo away in handcuffs instead.

And don’t forget the cement galoshes.

Or, meet his Lincoln Continental at that toll booth.

lord–why did they ever outlaw dueling?–would invite him(and fredo)to name the time and to appear in homine

I think the Democrats are beginning to realize what normal people saw years ago: Cuomo is rather stupid, an incompetent, and most importantly, missing a few screws.

Well, cuomo did kill more New Yorkers’ than Osama Bin Laden. So he has that going for him when he meets up with Kim. And anything that comes from a meeting will be blamed on wuflu.

This is a guy who willfully bred himself to one of the stupidest Kennedys ever to breathe, without assistance. Double entendre intended.

To his recommendation, he could probably transgender and pass as a surrogate for Pelosi or maybe a toteboi for Foghorn WhatHeName.

…legislation enacted in 2015 to regulate nail salons. Cuomo claimed Kim initially supported the measure, “then flipped 180 degrees” because “businesspeople in his community got upset.”

That makes sense. He supported a measure that sounded good to him, people whom it would hurt lobbied him against it, so he changed his mind and opposed it. Isn’t that how it’s supposed to work? Especially when those people were in his community; isn’t that what a representative is supposed to do? Isn’t it why we have representatives in the first place?

“He actually used his lobbying firm to lobby on behalf of the business owners … then raised money from those business owners and continues to do so,” Cuomo further alleged, regarding the six-year-old measure.

Well, of course. After they explained their position to him he supports it and has stood up for it, and saved their businesses, so of course they contribute to his reelection. Again, isn’t that exactly how it’s supposed to work?

“I believe it’s unethical, if not illegal. And I believe it’s a continuing racket because he’s still doing it.” Cuomo added that “the euphemism is ‘pay to play’” — the same sort of scheme for which a top Cuomo aide, Joseph Percoco, was convicted on federal corruption charges.

Um, no. That is not what “pay to play” is at all. Nor does it even remotely resemble what Percoco did.

“Pay to play” means charging someone money in order for them to gain some benefit. For instance if nail salons were regulated, and Kim had arranged permits or waivers for those salons who paid him personally, or even for those who donated to his campaign, while those who did not pay or donate would not be able to get these, that would be pay for play.

Percoco was convicted of good old fashioned bribery. Two companies gave him money, and in return he did them favors. He obtained government contracts for them, he had adverse decisions reversed, he basically was their fixer inside the government.

Kim did not get a penny from anyone; his campaign got donations from those who wanted him reelected, which is how it’s supposed to work. Nobody got any benefit for their donations; all salons benefited equally from his opposition to regulation. (Indeed often the whole point of regulation is to create opportunities for bribery, and advantages for those who are better able than their competitors to pay bribes. I’d be surprised if the proposed regulations in question were an exception to this.)

How long has Mr. Kim lived in NY? No one screws with Sonny Cuomo. Mr. Kim will enjoy his face down swim in the East River…