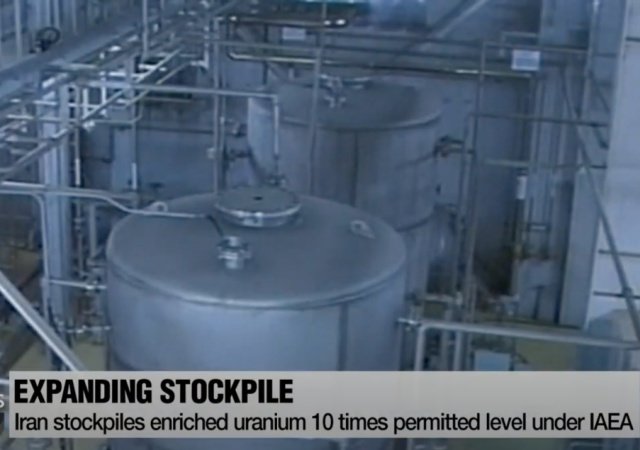 The U.N. watchdog International Atomic Energy Agency (IAEA) acquiesced to Tehran’s move to giving international inspectors “less access” to its facilities amid mounting evidence of nuclear activity at some of these sites.

Under the agreement, the U.N. nuclear watchdog forfeited its right to carry out suspected nuclear sites’ snap inspections.

“There is less access, let’s face it. But still we were able to retain the necessary degree of monitoring and verification work,” IAEA chief Rafael Grossi said, justifying the “a temporary technical understanding” reached with Iran.

The statement is hardly credible. Even the U.N.’s reports show that Iran has been advancing its nuclear program despite the purported monitoring and inspections. The IAEA inspectors have repeatedly detected radiations at Iranian nuclear sites, indicating a clandestine weapons program.

Iran will begin to offer United Nations inspectors “less access” to its nuclear program as part of its pressure campaign on the West, though investigators will still be able to monitor Tehran’s work, the U.N. atomic watchdog’s chief said Sunday.

Rafael Grossi’s comments came after an emergency trip to Iran in which he said the International Atomic Energy Agency reached a “technical understanding” with Tehran to continue to allow monitoring of its nuclear program for up to three months. (…)

“The hope of the IAEA has been to stabilize a situation which was very unstable,” Grossi said at the airport after his arrival back in Vienna, where the agency is based. “I think this technical understanding does it so that other political consultations at other levels can take place and most importantly we can avoid a situation in which we would have been, in practical terms, flying blind.”

Grossi, the IAEA’s director general, offered few specifics of the agreement he had reached with Iranian leaders. He said the number of inspectors on the ground would remain the same but that “what changes is the type of activity” the agency was able to carry out, without elaborating further.

The U.N. made these concessions ahead of Tuesday’s deadline set by the Iranian parliament to restrict international inspections and disable IAEA surveillance cameras at the nuclear sites if President Joe Biden’s administration did not lift all U.S. sanctions.

The move formally ends Trump’s policy of ‘maximum pressure’ on Iran. It paves the way for China and Russia to sell advanced weapons and air defense systems to the rogue Shia-Islamic regime. Given Iran’s status as the world’s leading state sponsor of terrorism, a substantial part of this weaponry would end up in the hands of Palestinian, Arab, and other Islamic terrorist groups in the Middle East.

With the Biden-Harris administration undoing President Trump’s legacy of strength and bringing back Obama-era policy of appeasement, Iran is confident that Washington will soon lift all sanctions imposed by the previous president.

“We predict with confidence that diplomatic initiatives will result in a favourable outcome despite the diplomatic wrangling, (…) including the lifting of all sanctions in the near future,” Iranian regime spokesman Ali Rabiei declared on Saturday.

I can’t seem to find the howling in laughter emote….

How can they be this stupid?

Apparently for the UN, it’s easy!!

They aren’t this stupid.
They simply don’t care to stop Iran.

They’re not. China wants a nuclear Iran to destroy the USA’s (what’s left of it) influence in the middle east.

They slipped obama and biden/harris into office, and they now run the USA.

WE are proving to be the stupid ones for allowing the rot within the US that has allowed fascists to now run our country.

Yes, they are that stupid. Each area where elevated radiation is detected should be ground zero for an appropriately sized nuke. If the current leaders cannot otherwise be neutralized, then Iran needs to be removed as a threat.

America needs to dump the UN, and kick them all out. By and large, they are users.

When does a terrible foreign policy rise to the level of national security risk??

What can The People do to remedy the clear danger???

Get in the fight: advovate, donate, boycott.

yet the US left still kisses their “ring”

What good behavior has Iran demonstrated to warrant reduced oversight??? If anything, they have demonstrated the opposite that warrants closer scrutiny and pressure.

The Trump administration had in it’s waning months made achievements in the Middle East that might have finally established a lasting peace. A reinvigorated, nuclear armed Iran however will likely destabilize things all over again! An Iran that might be a lot harder to be dealt with should they receive those advanced weapon and air defense systems from Russia and China.

Israel will NOT let that happen

Iranian a-bombs aside: the Junta in charge of America hates Israel. Israel is dependent on the Junta for ammo and military parts.

What will Israel do WHEN the Junta turns off the spigot?

Thanks Joe. When a new war starts in the middle east, we can thank you.

“Joe Biden, once again wrong on every foreign policy issue!!”

In other news, Helen Keller has been cloned and named co-lead U.N. investigator, sharing the co-lead honor with a clone of Ray Charles.

Comprehensive report expected sometime in 2525 (if we’re all still alive!).

Both Biden and the UN have given Iran a clear path go get the bomb. That’s going to increase pressure on Israel to take unilateral action to prevent the existential threat that a nuclear Iran would pose.

I expect Israel is going to be forced to do something to keep Iran from getting its hands on warheads that could wipe out all of Israel in a single preemptive strike. That might be subtle, like Iran’s nuclear facilities accidentally blowing up and killing their nuclear scientists. Or it might be more obvious, like air raids to take out the nuclear facilities.

Either way, Israel knows that Biden will readily stab them in the back for political gain like Obama did over and over. Trump was holding off war in the middle east by putting pressure on Iran and standing by Israel. Biden has made it clear that he won’t support Israel. I hope he doesn’t start shipping planeloads of US currency to Iran like Obama did. All that money got turned into missiles and other weapons.

Israel can also expect all of those agreements they’ve signed with various Arab countries under Trump are going to suddenly become invalid if/when they do anything against Iran, even if the Sunnis hate the Iranians as much as the Israelis do.