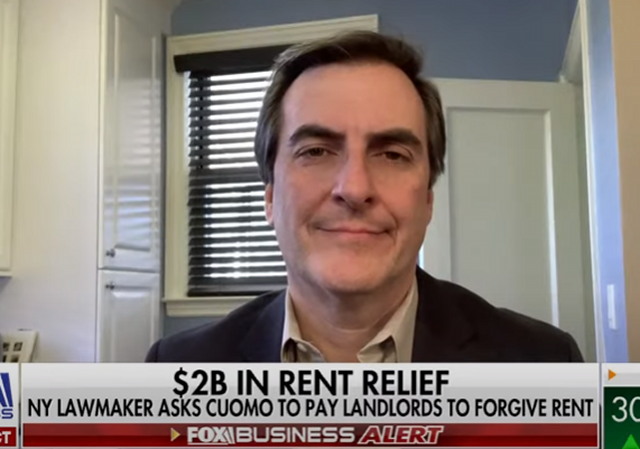 Since the beginning of the pandemic and the associated lockdowns, thousands of New York residents have been unable to pay their rent. One New York Democrat, State Senator Michael Gianaris, urged Andrew Cuomo to pick up the bill.

You knew this was coming, didn’t you?

One of the New York State Senate’s most powerful Democrats has called on Gov. Andrew Cuomo to pay landlords and provide tenants with rent relief as part of a $2 billion state budget proposal in an effort to stem the effects of the coronavirus pandemic.

MICHAEL GIANARIS: Tenants are certainly in need. They have been unable to pay their rent, largely through no fault of their own. We’ve restricted the economy, we’ve, in fact, taken away their jobs for the time being, and yet we’re still expecting them to pay rent … One of the ways to deal with this is to just help them pay their rent, because canceling without helping out these smaller homeowners just pushes the problem onto another class of people. They still have to pay mortgages, they still have to pay utilities and what have you.

So now the obvious question. Where is the money going to come from for this? New York is waiting to find out exactly how much more they’re going to get in COVID relief from the federal government. If it’s not enough, the next step is pretty obvious.

The $2 billion-plus price tag for what’s being called a Housing Stability Relief Fund is based on an analysis by research firm Stout and could be covered by federal funds, advocates argue.

Cuomo has presented a pair of budget proposals, one based on the state receiving $15 billion in money from Washington and another, dubbed a “worst-case scenario,” in which New York only gets $6 billion in COVID aid from the feds.

The Legislature must approve a state budget by April 1.

Should the Biden administration and Congress fail to come through on much-needed federal dollars, the state should consider increasing taxes on the wealthy to cover the cost of the rent relief fund, Gianaris said.

Tax the rich, which is the old Bernie Sanders special.

How many rich people are even left in New York City?

New York is broke. This is another way of saying we want Cuomo to ask Joe Biden and the Dem gravy train to pay for us.

So let me get this straight:
-People who worked their buns off, took lesser jobs after being laid off, scrimped and saved so they could make their rent payments, will get nothing.
-People who intended on ripping their landlords off and haven’t paid them a dime in the last year will get a nice check made out to them *instead* of the landlords that they have been shorting, giving them yet another year or so worth of free living space and most probably not a dime from that check will go to the landlord as intended.

Is that accurate? (I was going to ask if it was right, but there’s a few problems with that phrase)

From where I sit on the Left Coast (for now) it looks like you have it pretty well figured out.

The plan should be for the property owners to apply with documentation of amount of rent not paid to them and evaluated as to the expense they face for loans, utilities, etc, so the G can pay them directly.

But on a larger scale why should the Feds send the money of residents of Ohio, Oklahoma, etc, to NYC to cover the financial problems caused by the NY state and NYC governments?

Federal Taxpayers Nationwide Will Be Forced to PAY.

Georgia voted in 2 Dem Senators and thereby eliminated the Senate’s ability to protect taxpayers from having NYC Debt transferred to National Taxpayers. As well as debt of Chicago, San Fran and others.

THANK YOU GEORGIA – for agreeing to pay rent for NYC residents and for forcing the rest of the country too pay part of it too.

The response to all of this? A sternly worded admonishment. But, just as children ignore parents when there is no indication that any parental authority actually exists, these people will not stop. And, the chattering class [reporters] will keep pointing out that there is a another hole in the boat, which is sinking fast, until their last words are “I told you so”.

I know he doesn’t have quite that much, so bill him for the rest.

Personally, I think we should leave NY to wallow in their own extrement.

Given the crisis has been going on for ages, the policy response has been pretty poorly thought out.

“called on Gov. Andrew Cuomo to pay landlords and provide tenants with rent relief as part of a $2 billion state budget proposal… canceling rent without helping property owners only “pushes the problem” onto another class of people…”

Equity genius! This approach pushes the problem back onto the same class of people! They pay higher state taxes to fund the higher budget, then get some of it back as a check.

Socialism truly is the theory that society can create prosperity for all by dipping their hands in each others’ pockets.

They’ll take the tens of billions Biden will shower them with,

Escape from New York. Given what NY did volunteers and temporary workers who came to help out during the pandemic – You owe taxes on ALL of your earnings because you were here, no matter where you earned it – what are the odds that they will declare that everyone who leaves the state will still owe state income taxes no matter where they flee to? I mean, the US taxes citizens even when they leave the country to live and work elsewhere, so there’s precedent, right?

It will all work out in the end. the government deciding to breach thousands of contracts will cause huge damage to the economy and ensuing collapse. All part of the Kalergi plan. i am 82 and looking forward to nuclear war and the end of civilization. We are earning our just rewards.

I was hoping that the headline was accurate – that someone was asking Cuomo to pay for a bit of the damage he has wrought with his _own_ money, rather than for him to send armed men to collect money from some and give part of it to others.