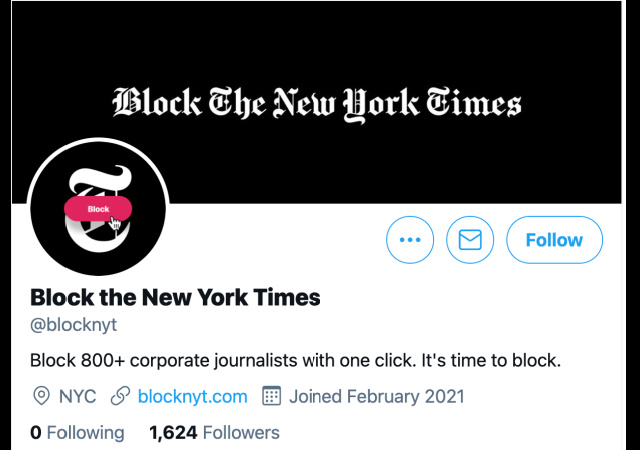 It's time to block.

Now, a new app automates the process. For a limited time, block 800 NYT reporters for the low price of $0. https://t.co/P0MuarxDRJ

The link takes you to a webpage that mocks the NYT webpage with the headline, “NYT BLOCKED.”

The subheadlines read, “Blocks take the lead in fight against disinformation” and “New app blocks 800 NYT reporters in seconds.”

You can block all of them with one click for only $0! 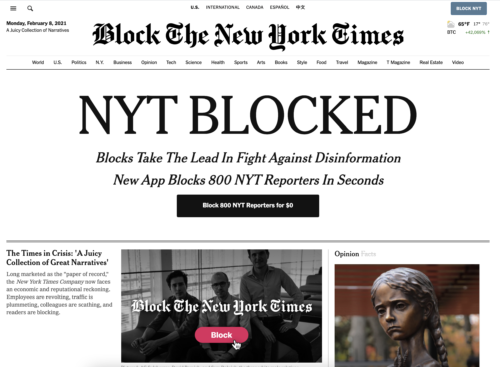 The description of the project is the lead story, “The Times in Crisis: ‘A Juicy Collection of Great Narratives.”

“Long marketed as the ‘paper of record,’ the New York Times Company now faces an economic and reputational reckoning,” it says. “Employees are revolting, traffic is plummeting, colleagues are scathing, and readers are blocking.”

Each link leads to a story about the times the paper of record got something wrong. These include the fake story that elevated its Caliphate podcast, the 1619 Project, and how it helped convict an innocent man in 2000.

I had no idea a bureau chief covered up Holodomor, the genocide of millions of Ukrainians:

One person noted that you have to give the app a lot of personal information. But the social media person explained Twitter makes them do this, but you can uninstall the app after the block.

Twitter's API makes us ask for all these permissions. All the app does is block these accounts: https://t.co/TaVranhx9k. You can uninstall the app right after using it. The accounts will stay blocked.

See the right-hand side of the screenshot.

Does this app actually exist? I don’t use Twitter, so it is of no use to me.

Personally I want an app that CANCELS the NYT. Fires all reporters, writers, and editors, and blacklists them so they can never find employment.

The “Newsletter of the Cancel Culture” needs to be cancelled itself.

.
This app may be for real, but if The Left® wanted to develop a list of non-Leftist Tweeters, this would be a good start.

Oh they already know. The “Masters of the Universe” are doing “sentiment analysis” on everything you write online.

Trust me the left already has lists of people on the right.

Many times I’ve come across some leftist that has blocked me on Twitter and I’ve never had any contact with that person before.

Amen. (Or A-woman, if you’re a democrat moron in Congress.)

It would be handy to have an app that would allow the user to enter keywords to avoid, such as Biden, Pelosi, Schumer, NPR, PBS and the entire litany of hate language such as BLM, antifa, Portland and so forth.

OTOH, it is handy enough to just stop grazing the internet, avoid the creepy places and unsubscribe from cable service.

Another dreary winter Monday, damned Biden is still breathing, on his own, and Pelosi lumbers along as though her days are everlasting.

They need an app to block WaPo, too. And MS/NBC. And CNN. Etc.

Pretty cool, but not so cool that I’d ever go back to Twitter to try it out.

In the immortal words of Nelson Muntz, “Ha-ha!”

Did it. Very easy to do. Once it was done I removed the app from Twitter like instructed and everyone at the NYT was still blocked as promised.

Now if we could get one for the rest of the media. I want to see them freak out and demand Twitter do something.

How long does anyone think it will be before Twitter imposes software to detect who has blocked The New York Times and asserts that refusing leftist propaganda is a violation of their terms of service that will get you thrown off Twitter? Which will get you to the proper endpoint, namely not to bother using Twitter at all.