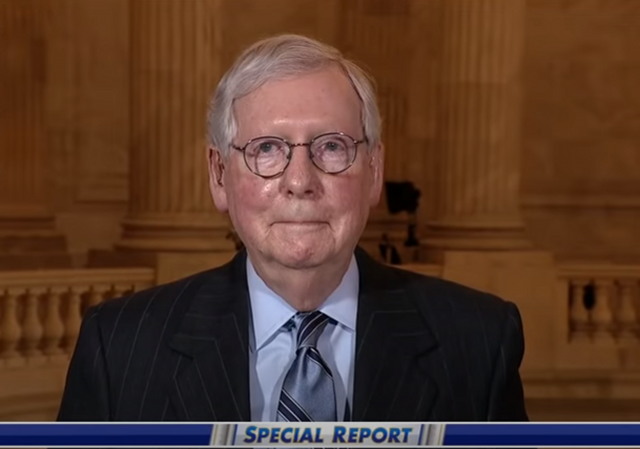 Mitch McConnell hasn’t been “Mr. Popularity” among conservatives lately. He angered a lot of people when he condemned Trump for what happened at the Capital.

However, on Thursday night, when asked if he would support Trump if he gets the Republican nomination in 2024, McConnell said he absolutely would.

The comments came during an appearance on Special Report with Bret Baier.

Jordain Carney writes at The Hill:

Senate Minority Leader Mitch McConnell (R-Ky.), who just weeks ago excoriated former President Trump on the Senate floor, blaming him for the riot at the Capitol, on Thursday said he would back Trump if he wins the party’s 2024 presidential nomination.

“There’s a lot to happen between now and ’24. I’ve got at least four members that I think are planning on running for president. … Should be a wide open race,” McConnell said during an interview with Fox News’s Bret Baier.

Asked if he would support Trump if he wins the party’s nomination in 2024, McConnell added: “The nominee of the party? Absolutely.”

The statement represents a remarkable about-face for McConnell, who after the impeachment trial had signaled he wanted his party to turn sharply from Trump.

Mitch McConnell says he would “absolutely” support Donald Trump in 2024 if he won the party’s nomination. pic.twitter.com/9wZvMH5ZlY

You can watch the full exchange below:

McConnell has managed to make everyone angry with this. Trump supporters haven’t forgotten what he said a few weeks ago, and neither has Trump haters.

Mitch didn’t need to put a finger in the air. The hurricane he seeded blew him over.

Too late Mitch. You can’t undo your betrayal.

Whether the Marxists prevail or not, your time has passed. Same goes for all of your GOPe, RINO, and neverTrump buddies.

Good thing he has two sides to his mouth. He needs both.

Mitch needs to shut his mouth and fade away into the sunset.

Let me tell you where he can put his finger…

This guy is COMPLETE garbage. Until we get rid of him – or marginalize him – we deserve all the grief we get from the rats of the GOP.

Dude got rolled by Pelosi into reacting that day without thinking and now even she will have no use for him. McCarthy went down to Mar a Lago to take his medicine for being a freak that day. Too bad Mitch stayed with Nan for some more pearl clutching.

I, like most of my social crowd, would never again agree to help Mitch out if he were on fire, even if I really, really needed to go.

Henry Bowman, I might pull a Smoky bear and use dirt and a shovel though.

Turtle Boy needs to go home and stay home. The GOP has already sailed away from his island.

Yes, but will he support us?

Support Trump just like he did before by Substituting GOPe people for MAGA people everywhere Mitch can.

Deeds, not words. That’s all that matters from GOP leadership.

Trump reminded us all the importance of that.

I bet that the loyalty stats struck fear in RINO hearts.

Josh Hawley needs to be in Mitch’s role as minority leader. He is the future of the party that is currently in the senate.

Can you imagine the success that we would have? Great idea.

Another day… another position. At least the Left is consistent, even if it is to destroy America.

McConnel drops a meadow muffin on the floor—then side steps around it. Typical politician with a finger in the wind–and his head far up his meadow muffin chute.

With friends like this swine, who needs an enemy?

Let’s never forget this bastard and his bastard wife are in bed with Communist China, and our country is just a place to be looted. He’s just pelosi with an “R” next to his name.

Sorry Mitch, with support like yours who needs enemies. You’ll support Trump until the going gets tough then you’ll just abandon him once again with another sanctimonious speech on the Senate floor. Thanks but no thanks. Your support isn’t necessary or wanted at this point.

He doesn’t believe Trump will get the nomination because he will be behind the scenes trying to ensure he doesn’t. He has nothing to lose by feigning support.

I don’t care what Mitch, The Post Turd, says about anything. He has to go. He should have gone a decade ago, when he declared that his main goal was crushing the Tea Party that gave the GOP back power in Washington to stop Barky and the Dems, after Mitch, The Post Turd, and his buddies made such a mess of things that the GOP was excised from all power in Washington in favor of an ineligible Indonesian and a bunch of America-hating Leninists, Trotskyites, and Maoists.

Mitch McCain screwed the pooch and needs to go back to his old Kentucky home and stfu.

Both. Sides. Of the street.

I get it … support the party nominee … evidently no matter what … but Trump is a piece of dung down to his very core. The party can find plenty of other candidates that have a far superior character that can also champion the party objectives.

Okay, spill. Who is your nominee?

That’s the problem. I want a nominee who will do what is right, not carry out the “party objectives” (open borders, endless wars in the Middle East, government-run health care, unconstitutional gun control and other attacks on the Bill of Rights).

And you can stuff the “character” baloney. The sleazy, opportunist Franz von Papen Republicans who tut-tutted Trump’s supposed lack of character need to take a good look in the mirror first. Why should I vote for a holier-than-thou NeverTrump Republican candidate who is (allegedly) faithful to his wife if he is not faithful to the Constitution or honest with the voters? Give me the brash loudmouth sinner who loves his country over the self-righteous prig who loves only himself.

Good ole “windsock” Mitch. He’s not poll driven, he is the poll!

Why would Trump trust McConnell?

Clearly, Trump does not trust him.

Everyone in Washington walk around with a wind vane To show where they want to go?