Cuban confirmed he gave the order, but did not say anything else about it. 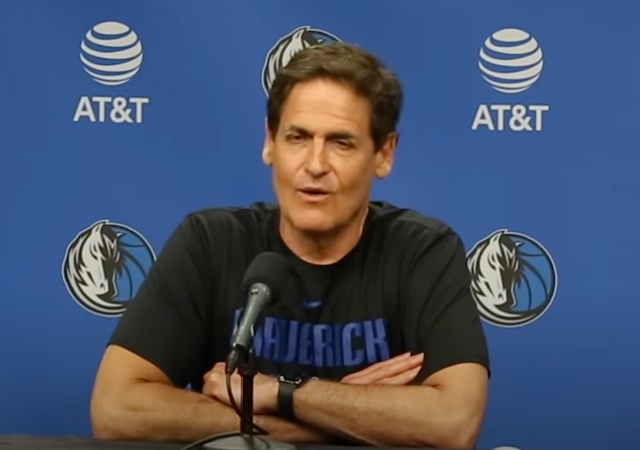 It took 13 games for anyone to notice, but the Dallas Mavericks stopped playing the national anthem before games.

Owner Mark Cuban confirmed he gave the order, but does not know if it will last all season nor did he provide any comment or statement.

The Athletic first reported the deletion on Tuesday but noted the team did not play the anthem in the 13 pre-season and regular-season games:

None of 13 preseason and regular-season games played at the American Airlines Center this season have featured the anthem before the game, including Monday’s game against the Minnesota Timberwolves, the first played this season with a limited amount of fans in attendance.

The Mavericks did not publicize the anthem’s removal, and The Athletic was the first media organization to reach out about the change after noticing its absence on Monday. Multiple team employees described only noticing the anthem’s removal on their own, as it was also not announced or explained internally.

An NBA spokesperson told The Athletic on Tuesday that “under the unique circumstances of this season, teams are permitted to run their pregame operations as they see fit.” Other teams have continued to play the anthem at their home venues mostly with recorded video or audio, including games played against Dallas.

Cuban consulted NBA Commissioner Adam Silver about his decision. The Mavericks also told other teams. None of them objected to Cuban’s choice.

Full statement from the NBA on mandating all teams to play the national anthem: pic.twitter.com/VeCIxLCpew

Cuban previously encouraged his team “to put their hand over their heart during the anthem.

But now “his feelings about the issue have evolved since 2017.” Cuban supports his players “who opted to kneel or protest during the song.”

In June, he said, “If they were taking a knee and they were being respectful, I’d be proud of them.”

The Mavericks used to play God Bless America before games. They changed it to the national anthem when Ross Perot bought the team in 1996. Cuban kept the tradition going until this season.

Don’t anyone dare say leftists aren’t patriotic though. What they lack in patriotism they make up in being so stunning and so brave.

It’s been going on for a month and no one noticed. Tells you what you need about the NBA.

It sounds like Cuban has lost most American patriots, they are no longer watching.

FIrst I heard of it was this morning on local country western station. I quit going to maverick games 8-10 years ago.

No longer a team game. All one on one. No longer enjoy watching

Any of you happen to live in an area where this billionaire force you to build coliseums for them? Might mention your feelings to the powerful in your city.

Like most corporate elitists he has no allegiance to the USA. We are just a market to him. He cares not, or is clueless, that it was the freedoms, liberties and laws of America that ensured his hard work could be rewarded. The narcissistic selfishness of these people knows no bounds.

He has admitted he has fantasies about running for president.

Once we leave this rathole our nation has become and begin our own, the hellhole we leave behind can have him.

Archie Bunker somewhere said that the Anthem was for baseball games and patriotic events like that.

The anthem is to get the crowd to stop milling around, shut up and pay attention. Self-appointed enforcers help you out.

A transition event, like the pledge in schools, or, once, bible readings in homeroom.

Actually the tradition dates back to 1862, when it was played before a baseball game. I think that may have had more to do with the Civil War going on than a crowd’s propensity to allow its attention to wander.

So it’s a long-standing tradition, actually rooted in patriotism (or patriotic intent). As traditions go, it’s not a bad one. Seeing it was instituted by the side that abolished slavery, the players and owners (of all American sports teams) might want to re-consider how appropriate it is to buck this particular tradition.

Seeing as the anthem is opposed by the party that supported slavery then and now, Cuban banning the anthem also makes sense.

As a result of banning Bible readings in school, no kids today can properly conjugate old-timey verbs.

It’s ingraditude Mark Cuban made billions from the USA but won’t play the National Anthem.

His target audience could care less.
They think racism is systemic to the USA

really who cares. i haven’t watched an NBA game in 10 years (with the exception of going to 1 game each of the last 2 seasons with a relative). even that will stop now.

This makes perfect sense to a billionaire globalist entrepreneur. Why would a billion Chinese viewers want to hear our national anthem or God Bless America. I am truly sick and tired of these billionaire assholes.

He would play the Chinese national anthem if his puppet masters in Beijing told him to do so.

Fans were told “no National Anthem.” Watch what happened next,

Hmm, maybe he is doing something people aren’t seeing: getting rid of the kneeling by avoiding the opportunity. On the surface his move seems un-American (or un-patriotic). Or, maybe it is his way of taking away part of the stage for the true un-American actors. Something to think about – I sincerely doubt that he would admit to it (my theory) because of the firestorm of fury he’d face.

Here is the anthem I expected him to start playing before the games. In fact, I think NFL teams have already played it for some of their games in China.
https://www.youtube.com/watch?v=-W4YetUHhKM

That tune sounds familiar. If it weren’t from a legitimate country that would never counterfeit something I would swear they lifted the melody from this… https://youtu.be/KkJnd9rSAQ8

Hey, lifting tunes for national anthems has a long tradition. We lifted ours from To Anacreon in Heaven, the UK lifted its from some German song ( so did Liechtenstein and Norway; and then we lifted it for My Country ‘Tis of Thee), Israel’s came from the same Bohemian folk song that Smetana used for the Moldau, and so many more.

Per Fox, the league stepped on his neck and told him to play the Anthem.

silver did not specify what countries anthem is to be played

The question at the end is becoming embarrassing. I always ask it whenever I see a US flag. We no longer teach the meaning of either freedom or bravery.

Don Surber had a neat column about the drop in nfl ratings.
Couple snips from the column.
———————————–
“The good news is Super Bowl ratings dropped to a 14-year low. My wife said the game was so boring, the cardboard cutouts left early.”

NFL ratings were terrible throughout the season, so much so that player payrolls (set at 65% of overall revenue) will decline for the first time in the salary cap era.