“seeks damages against the superintendent, high school principal, and high school athletic director for retaliating against Flynn for exercising his First Amendment rights” 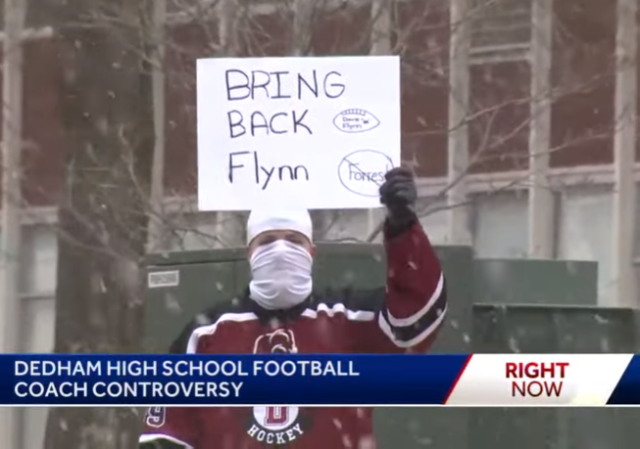 David Flynn is a top-rated football coach who has worked for Dedham High School in Massachusetts for years. He recently objected to the addition of Critical Race Theory being taught in his daughter’s 7th-grade history class, and the high school decided not to rehire him as a coach.

Judicial Watch is now suing on his behalf.

Judicial Watch announced today that it filed a federal lawsuit on behalf of David Flynn, the father of two Dedham Public School students, who was removed from his position as head football coach after exercising his right as a citizen to raise concerns about his daughter’s seventh-grade history class curriculum being changed to include biased coursework on politics, race, gender equality, and diversity (Flynn v. Forrest et. al. (No. 21-cv-10256)

The lawsuit, which was filed in the United States District Court for the District of Massachusetts, seeks damages against the superintendent, high school principal, and high school athletic director for retaliating against Flynn for exercising his First Amendment rights.

The lawsuit details that in September 2020, Flynn’s daughter’s seventh-grade history class, which was listed as “World Geography and Ancient History I,” was taught issues of race, gender, stereotypes, prejudices, discrimination, and politics. The lawsuit explains:

Concerned about the abrupt change in curriculum, Flynn and his wife contacted the history teacher and principal of the school – then later Superintendent Michael J. Welch and three members of the Dedham School Committee. On more than one occasion the Flynns asked for assistance in resolving the issues with the curriculum. Ultimately, in October 2020, the Flynns removed their children from school.

This passage describes what allegedly followed:

In January 2021, Flynn, who had been the head football coach at Dedham High School (DHS) since 2011, was called into a meeting with Welch as well as the DHS principal and athletic director. At the meeting, Welch handed Flynn one of the emails he had written to the Dedham School Committee members and informed him that one of the committee members asked Welch, “What are we going to do about this?” At the end of the meeting Flynn was told that they, “were going in adifferent direction” with the football program. Minutes later, the superintendent, high school principal, and athletic director released a public statement, stating that Flynn was removed as head football coach because he “expressed significant philosophical differences with the direction, goals, and values of the school district.”

This video report from WCVB News in Boston is short on details except for one. The students don’t want this. They love coach Flynn:

Amazingly, when I was researching this post, I noticed that two Boston area newspapers took the same approach to report the story. They reprinted the school’s position. See below.

A Braintree High School special education teacher won’t return to his role as the head football coach of the Dedham High School football team due to his “significant, repeatedly expressed, philosophical differences with the direction, goals, and values of the school district.”

Dedham High School football head coach David Flynn was not reappointed for the upcoming season after he “expressed significant philosophical differences with the direction, goals, and values of the school district,” school officials said in a letter to players and their families Wednesday.

Neither report contains a single reference to Critical Race Theory or the events that led to this ‘difference in values’ mentioned in both stories.

It’s not fun to immerse yourself in a legal battle, but this is what parents need to do if they wish to get this radical leftist ideology out of their schools.

“The price of freedom is the willingness to do sudden battle anywhere, any time and with utter recklessness.” – Robert Heinlein

Time to cancel the cancel culture.

Cancel them with a tsunami of civil litigation. Also, we need to engineer them turning on each other.

World Geography and Ancient History I

The school can start by explaining what Critical Race Theory has to do with the with ‘World Geography’ or ‘Ancient History’.

I read somewhere else about how Critical Race Theory will now be used in some other school to help teach Math.

Also, it sounds like the Navy will soon be appointing Critical Race Theory commissars.

I suspect that most people who believe or promote CRT pretty much ends with arithmetic, with few understanding any higher mathematics.

Reported today – CNN & NBC paid $70,000 to liberal agitator to incite ppl at the Capitol on Jan 6 – so they could get video. John Sullivan was arrested and his lawyers filed exhibits showing that he was paid by news media. This was supposed to part of his defense – he is trying to claim he was acting as a journalist – despite no journalist credentialing. Sullivan is a principal in the organization “Insurgence” and all of this adds a new twist to the “Insurgency”.

Sullivan is shown on tape as an instigator of the break in to the Capitol and was even at the scene of Ashlee Babbitts murder.

There are now questions about whether CNN and NBC could be liable for her death as a result of paying a provoker to instigating the situation.

At a minimum it blows away the liberal narrative and makes it clear that other groups – including actual news media – had a role in provoking the break in.

MEDIA have divided this country and fed off the hatred they stoke. NOW, CNN and NBC have crossed the line. They should be held accountable to the fullest extent of the LAW.

I am deeply suspicious that his actions may have caused her murder. I am also certain that she was an asset to humanity, and that he is not.

The two local papers didn’t reach out to Coach Flynn as they didn’t consider his side to be ‘legitimate news’. It’s the ‘repressive tolerance’ idea from Herbert Marcuse; only the left can be tolerant, and only the left has a legitimate side to any story. Mr. Flynn’s side is ‘wrong’, and therefore the papers don’t need to report it.

The Boston Globe is a wholly-owned subsidiary of the New York Times. Not just philosophically, but literally, legally.

The Patriot Ledger? My guess is that most of what they print is verbatim from the “services” they subscribe to, and NYT and BG both run “services.”

Actually, the NYT has not owned the Globe for some years, having sold its final stake in it back in 2012.

should the coach prevail here does that mean he’ll be able to attach/take their personal property(home, $$$, etc.)?–if so, this is the way to do it–take their gosh-damned house away–make them pay personally

Of course, I am not a lawyer, and your actual gas millage may vary.

@texansamurai, They will be named as defendants but indemnified by the school district. If he can prevail or settle in a lawsuit the taxpayer ultimately foots the bill.

You can email the superintendant here: [email protected]