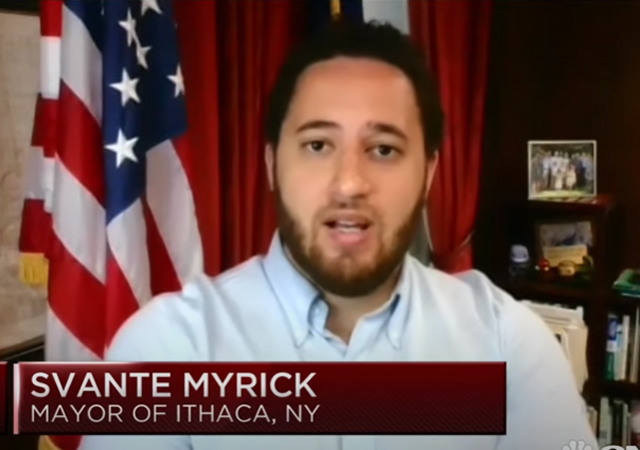 Did you think we were finally past all the ‘abolish the police’ nonsense? Even Minneapolis is now spending money on new police officers after rejoining reality.

Yet in Ithaca, New York, Mayor Svante Myrick is trying to replace the police with something that will make progressives feel better.

Check out this gushing report from Wesley Lowery at GQ:

The Most Ambitious Effort Yet to Reform Policing May Be Happening In Ithaca, New York

It’s been nine months since the George Floyd protests thrust “Defund the Police” and other abolitionist rhetoric into mainstream political discourse, yet the results have been meager so far. While some municipalities have sliced significant chunks from their police budgets—$150 million in both Los Angeles and Austin, Texas—a Bloomberg News review found that about half of the nation’s largest cities saw their 2021 police budgets either increase or stay the same. Of those departments that have cut back police funding, the Associated Press found, defunding has been modest, not monumental…

And now, in a proposal announced today, the mayor of Ithaca, NY will attempt the most radical reimagining of policing in the post-George Floyd era so far: abolishing the city’s police department as currently constructed and replacing it with a reimagined city agency.

In a nearly 100-page report obtained by GQ, Mayor Svante Myrick will propose replacing the city’s current 63-officer, $12.5 million a year department with a “Department of Community Solutions and Public Safety” which would include armed “public safety workers” and unarmed “community solution workers,” all of whom will report to a civilian director of public safety instead of a police chief. Under the proposal, all current officers would have to re-apply for a position with the new department.

Mayor @SvanteMyrick of #Ithaca wants to eliminate police dept. All the local libs who will celebrate, remember: When seconds count, a social worker is only minutes away. https://t.co/rXpuzqo5L0 via @gqmagazine

Putting civilians with no experience in law enforcement in charge of a police force (whatever you choose to call it) hasn’t worked out well in other places where it’s been tried. I don’t expect it will be that successful in Ithaca either. And the first time one of these unarmed “community solution workers” finds themselves running up against an actual bad guy with some firepower, I’m guessing you’re going to be hearing some demands for the cops to come riding back to the rescue.

The liberal media has been swooning about Myrick for years. Check out this 2012 report from the Media Research Center:

NBC Cheers Liberal Ithaca Mayor as the Next Obama

Touting the newly-elected mayor of Ithaca, New York, 24-year old Democrat Svante Myrick, on Wednesday’s NBC Rock Center, host Brian Williams drew parallels to Barack Obama: “He grew up a bi-racial kid with an unusual name. He went into politics. If that story sounds familiar, then you must meet the young man they must now call ‘Mr. Mayor.'”…

Introducing the segment, Williams told viewers to “think about what of this story sounds familiar.” During her report, correspondent Kate Snow promoted the comparison: “When he was in high school, Myrick’s grandmother gave him a copy of Barack Obama’s book, ‘Dreams From My Father.’ And for another bi-racial kid struggling with his identity, growing up without his father, raised by a white mother, he saw himself in that story.”

How about a new rule? People who call for the abolishing of police automatically give up their right to be protected by police. If that was enforced, we wouldn’t have so many morons calling for this ridiculous policy.

Make Ithaca a laboratory for progressive policy. “Armed” social..er..safety workers? I thought armed enforcement of any type was bad. How will they decide when a safety or social woker is needed? I guess abolishing criminal statutes is required to reduce crime and free the safety workers from enforcement. Do it!!!

“Armed” but not with firearms, I’d wager. After all, that would be totally against the leftists’ teachings, wouldn’t it?

Chesa Boudin and George Gascón will be happy to share their ideas for successfully reducing crime, as they’ve accomplished in SF and LA, respectively.

You know these clowns really want to call it the Committee of Public Safety.

Will those solutions be final solutions?

“OMG, someone’s in the Mayor’s office threatening him with a weapon!
Quick, call a Community Solution Worker!
Preferably one with experience in mopping!”

Let them do it. The more examples of this nonsense going wrong the easier it is to prevent it’s spread.

Any former officer who applies to be a armed “public safety workers” is insane. It’s a trap. Let some other sucker go for it.

It’s going to be like that stupid show The Watchmen where the police literally have to get permission to unlock the gun in their car before they can use it.

Why is this appearing in GQ? It seems an odd choice for publication of such town-altering news. Maybe it’s just me.

I’ve found that more often than not, it’s an indication that a major character in the story is gay.

This is a devolopment I totally support! Of course the commie imbeciles running it must give up all their armed bodyguards as well. The virtue signalers of Ithaca all love unarmed social workers.

Don’t be fooled by this verbal sleigh-of-hand. “Abolish the police” means replace the police with a Stasi-like organization loyal to the Communist Party. The only kind of crime they will actively investigate and prosecute is political crime.

Except for Dak Prescott, his white mom raised him, dad not in picture, 2 other brothers, she dies young of cancer and white aunt raises the clan
He refuses the BLM BS

So I will support Dak and watch him play

The monsters came out when he was injured

As the saying goes, let them have it. Good and hard.

Hasn’t London done something similar? Most of the bobbies don’t have weapons. If there is a violent event going on they call it in for a weapons team as they run away.

And they badmouth the citizens, that they disarmed by law, for not stepping in and helping the cops do the jobs they get paid to do, when the cops are getting their asses kicked, instead of standing there taking videos on their phones (“being a good witness,” like cops always tell us is so much more important than being prepared with adequate tools for self-defense).

Most of the bobbies don’t have weapons.

None of the bobbies carry weapons. It’s an unarmed police force. Only specially trained officers carry weapons and that’s only under extra-ordinary circumstances. Otherwise no weapons are routinely carried.

In Britain for killing a bobby:
TL/DR: kill a bobby, life in prison.

Criminal Justice and Courts Bill Fact sheet: term of imprisonment for murder of a police or prison officer

Introduction 1. The Government is making this change in the law because it recognises the unique and dangerous job that police and prison officers do on a daily basis. The Government has rightly reformed policing and the terms under police officers work. It also wants to be clear how highly it values the job that police and prison officers do in keeping the public safe. They perform a unique role in that their daily duties bring them into routine contact with dangerous offenders in difficult situations and we know that, tragically, some officers have paid the ultimate price in carrying out these duties. The change also signals the Government’s commitment to the established British model of policing by consent.
What is the current position?
2. A life sentence is mandatory for murder. There is statutory guidance to the courts on determining the seriousness of an offence and minimum term to be served under a life sentence for murder. The minimum term is the period which must be served in prison for the purposes of punishment and deterrence before the offender may be considered for release by the Parole Board. The guidance provides for various starting points depending on the type of case. In exceptionally serious cases the court may consider that a whole life order is justified (for offenders aged 21 or over), meaning that the offender faces spending the rest of his or her life in prison.

3. The statutory guidance currently provides for a 30 year starting point for the murder of a police or prison officer in the course of duty before the court then takes into account any further aggravating or mitigating factors in the particular case to arrive at the final minimum term, which may be higher or lower than the starting point. What are the proposed changes?

4. The provisions in the Bill will raise the starting point for the murder of a police or prison officer in the course of duty to a whole life order. This means that the court should normally consider a whole life order in these cases, but they will retain the discretion to consider all the circumstances of each case in determining the final sentence.

Here some folks (in government!)cheer.

IIRC, it used to be mandatory hanging.

Actually that is time past. The London (and other UK) police department are starting to have more and more specially trained and armed police. The days of ‘the unarmed bobby’ are gone. Where the unarmed go, flying squads of armed policemen are at the ready. Also London has something like a video police surveillance state. I’ll take armed police over THAT any day.

In any event, we have to elbow them into the background or they will destroy us.

Computer voice: John Spartan you are fined one credit for a violation of the verbal morality code!

In fact, I do. I do not live there, and maybe a few enterprising criminals will relocate to that SJW paradise… /s

He is just auditioning for a future AOC -Myrick ticket.

“Community Solutions Workers” are what the citizens will get. Armed police will be reserved for the security of the mayor and other government employees.

* SIGH * …. quick someone remind me what the definition of insanity is again

This what you get when you vote party and never vet a candidate.

Ithaca police have been dysfunctional in protecting the general public for years. Occupy Wall Street, Antifa,BLM and other “protesters” have had a free reign in disrupting traffick and otherwise intimidating citizens at will. The link below shows what happened right in front of the Ithaca PD last summer. The source is unusual, but the story is accurate. Just shows how none of the “respectable” media were willing to talk about it.

This is a continuation of the idea that laws, ordinances and other society enforced ‘norms’ should not be enforced on the lower halves of minority communities. That somehow their dysfunction is cultural and imposing a Western idea of peace and lawfulness is in fact, racism.

This nonsense clearly misses the glaring fact that in the majority of cases (although not in Ithaca) the victims of crime or a lowered quality of life are themselves minorities. When an entire city decays by increased crime, people stay away, revenues plunge, and even fewer resources are available to that same community.

It will be interesting to watch the activist professors, progressives, and in general your average Ithaca vegan, as they increasingly get robbed, stabbed or beat up for being White. In general this group could not defend itself from getting a pink belly.