Fauci debunked this claim in January. 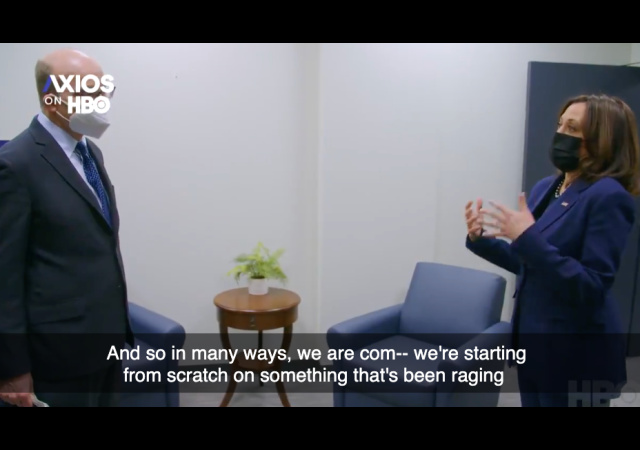 Fact-checkers from CNN and The Washington Post eagerly investigated everything that came from the mouths of President Donald Trump and Vice President Mike Pence.

No one can find them now after Vice President Kamala Harris claimed President Joe Biden’s administration is “starting from scratch” with COVID-19 vaccine rollouts.

Then again, CNN reported in January that the administration had to “start from scratch” with vaccines. Dr. Anthony Fauci denied this claim, but CNN doubled and tripled down on the report.

So I guess it’s not shocking that we cannot find the CNN fact-checkers regarding Harris’s claim.

Stacey wrote up the exchange between NBC News reporter Kristen Walker and Fauci:

Welker: Is the Biden administration starting from scratch with the vaccine distribution effort? Or are you picking up where the Trump administration left off?

Fauci: No, I mean, we certainly are not starting from scratch because there is activity going on in the distribution. But if you look at the plan that the President has put forth about the things that he’s going to do, namely, get community vaccine centers up, get pharmacies more involved, where appropriate, get the Defense Production Act involved not only, perhaps, with getting more vaccine, but even the things you need to get a good vaccine program. For example, needles and syringes that might be more useful in that. So it’s taking what’s gone on, but amplifying it in a big way.

Welker: President Biden said that what was left was abysmal, essentially. I mean, is there anything actionable that you are taking from the previous administration? Or — and is that delaying your efforts to get the vaccine? I mean, that’s the question.

Fauci: No. We’re coming in with fresh ideas but also some ideas that were not bad ideas with the previous administration. You can’t say it was absolutely not usable at all. So we are continuing, but you’re going to see a real ramping up of it.

“There was no stockpile of vaccines,” Harris complained. “There was no national strategy or plan for vaccinations. We were leaving it to the states and local leaders to try and figure it out. And in so many ways, we’re starting from scratch on something that’s been raging for almost an entire year.”

Axios deleted and replaced its tweet with the claim. Thing is, Axios did this quietly. I do not see any correction or explanation as to why the outlet made the move.

Biden Admin has done all it could to mislead about the state of U.S. vaccination response. They began gaslighting & setting the bar basically on the floor from the second they took office despite U.S. hitting then surpassing 1 million doses/day goal right around Inauguration Day. https://t.co/pTR6PgT7nV

Axios deleted the tweet on the left which pointed out that Kamala’s claim seemed to be contradicted by what Fauci has said, and Axios replaced it with the Kamala tweet on the right which no longer includes the context from Fauci. pic.twitter.com/Wws9XX92Ip

Considering Fauci already debunked Harris’s claim it would not have been hard for either man to fact-check the vice president.

They also downplayed her promoting a fund that released rioters from jail. FYI under San Fran NAn law that’s impeachable

Scott Adams today says it’s fake news – what she said was edited away from how she continued, by Fox.

Fox makes money by reporting what the left is saying now and depending on outrage on the right, and have started cheating.

I’ve looked everywhere for that. Please provide a link. Thanks.

1 million a day getting the vaccines after Dr. Fauci told us they wouldn’t be ready for anyone period is not starting from scratch (According to Der Fauci’s timeline the first vaccination anywhere is in the future right now).

Media are about as free and fair as Pravda or Der Sturmer. Yes we do have state media it is called various things like New York Times and CNN.

She’s still the inarticulate, giggling fool who slept her way to the top, the nation all knew and booted-out in round one of the democrat primary.

Exactly,why would anyone believe the lying whore.

Does anyone know the backstory of why an Israeli university just gave fauci ONE MILLION DOLLARS for “defending science”?

Is the Israeli left going to destroy Israel before Iran, biden and john kerry get their try?

Flip Flopping Fauci changed his tune, so that he could tell us all how correct Kamala the insurrectionist was….

“I believe what the vice president is referring to is what is the process of actually getting these doses into people.”

Which ISN’T exactly Trumps fault. He fast tracked it, and got them to states…it is on the STATES if they aren’t put into people. Flip flop flip flop….Got support the radical agenda no matter what the lie is…

Fauci just got a million dollars – for nothing.

Shades of obama’s ‘nobel prize’ for nothing:

They laundered the money through Israel, no less.

In reality, the Trump administration did not buy enough of the first two vaccines to inoculate everybody in the US for a perfectly good reason or two. First, Covid could have burned itself out in a few months like several diseases have. Second, there are additional vaccines coming onto the market, and if some of them have better immunization rates or require only a single shot or are less expensive, they would have been purchased instead of the first two. Third, if one of the first two vaccines suddenly popped up with a significant aftereffect, the US would have been on the hook for millions of doses that they could not find anybody to take.

In Anti-Trumpland, the fact that he did not pay for every American’s vaccine with his own money the instant it became available is because he’s a horrible orange-haired man who hates us all and that’s a fact and anybody who disputes it needs to be kicked off the internet and prosecuted et al…

VP Harris, correctly, realized she could say anything negative about Trump Administration and the Democratic operatives and Leftist activists posing as journalists would cover for her. VP Harris is proven right as Axios censors itself and the rest of the Democratic Media lies by omission.

Modified RNA has a direct effect on DNA
https://phys.org/news/2020-01-rna-effect-dna.html