CNN reported anonymous Biden administration sources as saying “We are going to have to build everything from scratch”, but Biden’s chief medical adviser Dr. Tony Fauci severely undercut the report just hours later. 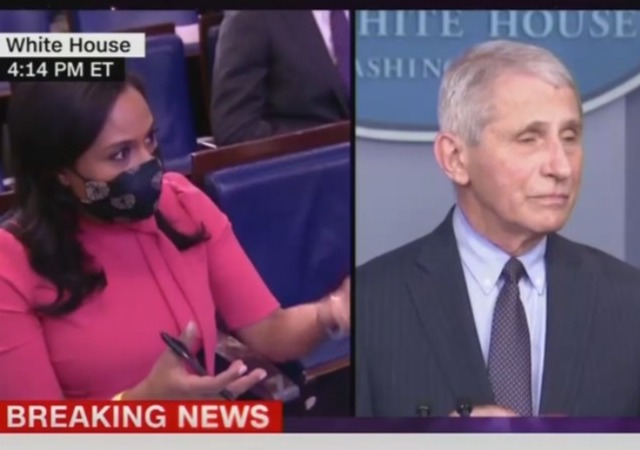 CNN filed what on the surface looked like a blockbuster report Thursday about how sources within the Biden administration claimed that they were having to “start from scratch” on the Wuhan coronavirus vaccine rollout.

Their White House correspondent M.J. Lee quoted multiple anonymous officials who stated, without evidence, that allegedly inheriting no vaccine rollout plan from the Trump administration “was just further affirmation of complete incompetence” on the part of former Trump officials:

Newly sworn in President Joe Biden and his advisers are inheriting no coronavirus vaccine distribution plan to speak of from the Trump administration, sources tell CNN, posing a significant challenge for the new White House.

… in the immediate hours following Biden being sworn into office on Wednesday, sources with direct knowledge of the new administration’s Covid-related work told CNN one of the biggest shocks that the Biden team had to digest during the transition period was what they saw as a complete lack of a vaccine distribution strategy under former President Donald Trump, even weeks after multiple vaccines were approved for use in the United States.

“There is nothing for us to rework. We are going to have to build everything from scratch,” one source said.

Another source described the moment that it became clear the Biden administration would have to essentially start from “square one” because there simply was no plan as: “Wow, just further affirmation of complete incompetence.”

The big problem with this “report” is that Biden’s chief medical adviser Dr. Anthony Fauci undercut it pretty quickly. During a press briefing in an exchange with NBC News’ Kristen Welker, he noted that the incoming Biden team had some “fresh ideas” they would incorporate into the existing vaccine rollout plan already in place. He also said it included “some ideas that were not bad ideas”:

Welker: Is the Biden administration starting from scratch with the vaccine distribution effort? Or are you picking up where the Trump administration left off?

Fauci: No, I mean, we certainly are not starting from scratch because there is activity going on in the distribution. But if you look at the plan that the President has put forth about the things that he’s going to do, namely, get community vaccine centers up, get pharmacies more involved, where appropriate, get the Defense Production Act involved not only, perhaps, with getting more vaccine, but even the things you need to get a good vaccine program. For example, needles and syringes that might be more useful in that. So it’s taking what’s gone on, but amplifying it in a big way.

Welker: President Biden said that what was left was abysmal, essentially. I mean, is there anything actionable that you are taking from the previous administration? Or — and is that delaying your efforts to get the vaccine? I mean, that’s the question.

Fauci: No. We’re coming in with fresh ideas but also some ideas that were not bad ideas with the previous administration. You can’t say it was absolutely not usable at all. So we are continuing, but you’re going to see a real ramping up of it.

CNN has reported on-air today a total of 23 times that the Biden administration has had to start from “scratch” – Dr. Fauci directly contradicts this Biden talking point. https://t.co/mdmkyACOQu

CNN updated their report later to include Fauci’s comments. Still, M.J. Lee referred to Fauci as a “holdover from the Trump administration” in a tweet she posted later, an apparent attempt at trying to diminish the opinions of the man who up until yesterday was a darling in media and Democrat circles:

Fauci downgraded to “holdover from Trump administration” after going off script ?? pic.twitter.com/t3mqTZFUSD

Twitter user Drew Holden compiled a lengthy thread full of tweets from other media outlets and Democrats who amplified the fake news about how the Biden administration was supposedly starting with no vaccine rollout plan. Here are a few of them:

But it wasn’t just @CNN. Other outlets and their reporters piled on, too. Because you see, if people believe this, Biden’s job gets way easier: anything tied to the vaccine is a success.

It wouldn’t be a chance for anti-Trump spin if @maddow and @MaddowBlog weren’t involved. pic.twitter.com/PVeIdvOwry

And it wasn’t just reporters. Here we’ve got @SpeakerPelosi picking up the unsupported, unsubstantiated claim and running with it – in front of the American people – as if it were true. pic.twitter.com/XLjkN0xzlT

This is how these stories that sound too good to be true always gather steam: flimsy reporting, amplified by self-interested politicians, and then folks with large platforms add fuel to the fire until its public record.@paulkrugman has basically made a career of this. pic.twitter.com/8vcT308QAJ

“Reports” like these are planted by Democrats and amplified by liberally biased media outlets like CNN by design. They don’t have to necessarily be substantiated because Democrats know that by merely tossing a serious allegation out there that the media will rush to lend it credence merely by tweeting and writing about it. Then, hours later, when the blockbuster story is debunked, it’s too late to correct the mess because the narrative has been set. Mission accomplished.

We saw this happen with regularity during the Trump administration, where Democrats and the media conspired to push “blockbuster” anti-Trump stories that ended up being big nothing burgers. It’s only going to get worse in the Biden administration, thanks in no small part to outlets like CNN, which appears to be taking to their role as unofficial state-run TV outlet for Joe Biden with extreme relish.

CNN Removed the CV19 Death Tracker from their screens yesterday. Like they removed the Soldier’s death toll tracker after Obama took office.

Fauci better watch out – he might have a boating accident for not towing the state’s line.

It is strange how people who Hillary sees as a threat suddenly commit suicide.

Fauci’s kind of disposable. Once his usefulness as a liar goes, he certainly has no use as a doctor. (Who the hell would trust this guy? – Surely not even his own side, who saw what a lying hack he is.)

Was “towing” deliberate, because of the boating context? 🙂

Because of the nature of Viral Spread – More Americans will Die from Covid19 during the first 3 months of the Biden Administration than died during the entire Trump Admin.

Are you sure about that claim?

I understand where you’re coming from, but initial deaths weren’t driven only by standard-virus-spread math (there was a lot of idiocy in NY, for instance, that boosted their numbers). And now that many people have gotten natural immunity by getting the disease and getting over it, and then you add vaccine-driven immunity, I just don’t think it’s going to be quite that bad.

I’d estimate new deaths might exceed the earlier death totals in 6 to 9 months, but 3 months seems much too quick.

Here’s hoping that it doesn’t match/exceed the old totals at all.

Does that give you immunity? It all depends on who you talk to.

Multiple anonymous sources familiar with the matter confide that Biden was always the dimmest bulb in the Senate.

The dimmest bulb in a chamber full of dim bulbs.

Which is why the ChiComms chose him. And why they chose an even dimmer bulb to ultimately replace him.

Worse – he suck power from the other bulbs. Like a black hole on the marque.

CNN has been writing fiction for over 3 decades.

The vaccine is currently available to the public at both my local Walmart and at Publix. Seems like the distribution plan is working so far.

Probably because your state and local politicians are keeping their mitts out of things.

Yeah, scratch out Trump’s name and scratch in his own.
Plagiarism — a skill for a lifetime of success!

He wants to start from scratch, because, surely, their must follow a sniff.

All ‘reporting’ by CNN should be assumed fake, false, untrue until proven otherwise.

And any proof coming from the NY ‘Marx Was Right’ Times or WaPo is unacceptable. Their ‘reporting’ is in the same boat.

If there was no plan for distributing the vaccine how did millions get vaccinated before Jan. 20?

If there was no plan for distributing the vaccine how did millions get vaccinated before Jan. 20?

You know better than to ask such unpatriotic questions.

They don’t care that anybody with half a brain sees this story and knows it’s a pile of crap. This is setting the scene for all the rest of the media to happily repeat it like a bunch of mindless parrots, over and over and over….

It has nothing to do with Biden – or that corrupt weasel Fauci.

Comnunist China is running the show, from Biden down to Pelosi, down to McConnell.

“Trump had no plans to distribute vaccines – Pelosi”

Yet, somehow, vaccines were being distributed for weeks. Does Pelosi believe in magic or miracles? Because Trump would have to have been either a magician or a miracle-worker to accomplish that feat. Vaccines don’t distribute themselves – in fact, NOTHING distributes itself – through government channels.