Chinese foreign ministry: Beijing demands “unconditional return of the United States to the JCPOA as early as possible.” 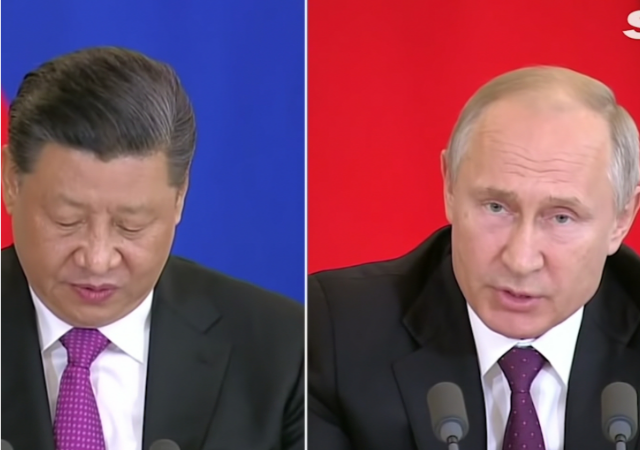 Beijing demands the “unconditional return of the United States to the JCPOA as early as possible, its resumption of compliance and elimination of all relevant sanctions,” Chinese Foreign Ministry spokesperson Wang Wenbin told reporters on Tuesday.

The Biden White House is under pressure from Beijing and Moscow to “return the U.S. immediately to compliance with the Iran nuclear deal,” the U.S. magazine Newsweek reported on Wednesday.

Newsweek reported the Russian and Chinese demands for an unconditional U.S. return to the Iran deal:

China and Russia—two of the other Joint Comprehensive Plan of Action signatories—are pushing the Biden administration for a full return to the 2015 accord under its original terms, as Iranian leaders continue to do the same. (…)

Russian officials have repeatedly urged the Trump and Biden administrations to return to the deal without any conditions. On Tuesday, Chinese Foreign Ministry spokesperson Wang Wenbin said China backed “the unconditional return of the United States to the JCPOA as early as possible, its resumption of compliance and elimination of all relevant sanctions.”

“On this basis Iran should resume full compliance,” Wang added. “China is following the situation closely and maintaining close communication with all relevant sides. We support a step-by-step and reciprocal approach and will continue to work with relevant parties and the international community to bring the JCPOA back on track and promote the political settlement of the Iranian nuclear issue.”

Russia’s representative to the international organizations in Vienna said U.S. demands for Iran to make the first move would prove “fruitless.” Mikhail Ulyanov wrote on Twitter: “This is high time for U.S. and Iran to make coordinated steps to restore full implementation of JCPOA.”

This is not the first time China has addressed the U.S. in such a demanding tone since Biden was declared the winner of the presidential election.

“The US shall return to the Iran nuclear deal as soon as possible and without any preconditions, and the US should also scrap all sanctions imposed on Iran, other third-party entities and individuals,” Chinese Foreign Minister Yi declared in late December.

Iran makes no secret of its intentions of acquiring a nuclear arsenal. The regime continues to increase its stockpile of uranium while developing long-range ballistic missiles capable of carrying nuclear warheads. Tehran is “enriching uranium with a larger number of advanced centrifuge machines in an underground plant,” Reuters reported on Tuesday.

China and Russia, however, have deeply vested interests in seeing the U.S. rejoin the deal.

Iran is a significant buyer of Russian military equipment and a key backer of Syrian dictator Bashar al-Assad, Moscow’s main ally in the Middle East.

China and Russian are not alone in pressuring Washington into returning to the Iran nuclear deal. France and Germany, the two other signatures of the 2015 nuclear deal framework, are also calling on the Biden administration to return to the multilateral agreement abandoned by President Donald Trump in 2018. The European Union and the five permanent members of the United Nations Security Council (China, France, Russia, the U.S., and the United Kingdom) endorsed the Obama-era deal.

Germany and France had lined up multi-billion dollar deals in the wake of the 2015 agreement. German and French companies made considerable investments in Iran’s oil and industrial sectors. The hopes of striking it rich in Iran vanished when President Trump pulled the U.S. out of the agreement in May 2018, slapping stiff economic sanctions on the terror-sponsoring regime.

While the world powers make demands on behalf of Iran, the Islamic regime continues with dissidents’ executions at home and a campaign of terrorism abroad.

Iranian agents were recently arrested in east Africa while scouting the U.S. and Israeli embassies for potential terrorist attacks. On Friday, the pro-Iranian terrorist group carried out a bomb blast outside the Israeli embassy in India, Indian media reported.

I don’t recall such demands being placed on the Trump administration. Maybe, China and Russia already knew the answer they would receive.

Does anyone else get the feeling that this time Pallets full of Cash will be on a plane to Joe Biden’s family?

Iran needs to have a nuclear accident which destroys most of their country. Their conduct has been atrocious enough to justify eradication

And Joe will immediately obey his masters.

Translation: “We demand your unconditional surrender and obedience.”

If they both want this so badly as to make suck blatant demands – it cannot be good for the USA.

The fact that Russia and China fell free to make such brazen demands on this country only confirms what we all know. The lunatics are indeed in charge of the asylum.

I dont know why they are wasn’t their time. Everyone already knows Gropey Joe is already on his way to getting back in bed with the eye-raaaaanians.

Gee, look, another rotting tree in the forest of despair. What to do, what to do.

Chinese foreign ministry: Beijing demands “unconditional return of the United States to the JCPOA as early as possible.”

A return to the JCPOA’s watchful oversight of wars without borders and transnational terrorism funded, in part, through reordering of claims and redistributive change.

Meanwhile, the CCP has progressed from the Great Leap (i.e. Planned Population) to one-child (i.e. minority choice) to selective-child (i.e. delegated choice) and concentration and re-education camps, and, of course, aggressive expansion that has placed its neighbors on notice. One step forward, two steps backward.

Obama’s agreement with Iran that guaranteed that Iran would obtain nuclear tipped ICBMs! To bad that McConnell didn’t declare that it was a treaty requiring ratification and thereby killing it.