AP: “Despite the early warning, the group took no action against Weaver and pressed forward with its high-profile work”

As we noted last month, Ryan Girdusky broke the story of Lincoln Project co-founder John Weaver’s alleged predatory behavior toward young men, and when the New York Times followed up with its own reporting of the allegations, the Lincoln Project adamantly denied any knowledge of the reported incidents.

The AP is now reporting that in “June 2020, members of the organization’s leadership were informed in writing and in subsequent phone calls of at least 10 specific allegations of harassment against co-founder John Weaver.”

In June 2020, members of Lincoln Project leadership were informed in writing and in subsequent phone calls of at least 10 specific allegations of harassment against co-founder John Weaver, including two involving Lincoln Project employees. https://t.co/CdiVPK5mp3

Girdusky had called the denials into question, and it appears from the AP report that he was correct.

This statement by the @ProjectLincoln is an absolute lie.

Members did know. Young men approached them about the accusations. Members knew I was writing the story and warned John Weaver pic.twitter.com/BZms5iLgpL

Good @AP exposé proving what what was already obvious:

1) @ProjectLincoln lied when it denied knowing of complaints about John Weaver’s sexual misconduct;

2) It was a massive financial scam to enrich its founders at the expense of gullible liberals.https://t.co/k6lFrgqzS4 pic.twitter.com/U6RRKIEPdO

In June 2020, members of the organization’s leadership were informed in writing and in subsequent phone calls of at least 10 specific allegations of harassment against co-founder John Weaver, including two involving Lincoln Project employees, according to multiple people with direct knowledge of the situation. The email and phone calls raise questions about the Lincoln Project’s statement last month that it was “shocked” when accusations surfaced publicly this year. It’s also the first known suggestion that Weaver targeted a Lincoln Project staffer.

Despite the early warning, the group took no action against Weaver and pressed forward with its high-profile work. For the collection of GOP consultants and former officials, being anti-Trump was becoming very good for business. Of the $90 million Lincoln Project has raised, more than $50 million has gone to firms controlled by the group’s leaders.

There is no evidence that the Lincoln Project buried the allegations against Weaver for business reasons. But taken together, the harassment allegations and new revelations about spending practices raise significant questions about the management of one of the highest-profile antagonists of Trump. The revelations threaten the stature of not just the Lincoln Project but the broader coalition of establishment-oriented Republican groups working to excise Trump from the party.

. . . . Last June, someone working for the Lincoln Project payroll sent an email to Steslow, one of the organization’s co-founders, detailing numerous cases of sexual harassment involving Weaver that spanned several years. While the AP has not seen the email, its contents were confirmed by four people who had directly seen it.

. . . . Schmidt did not confirm the existence of the email, saying only that if one existed, it was not shared with anyone on the organization’s board or leadership.

But multiple people familiar with the situation say that Steslow immediately raised the email with Galen, who helped manage day-to-day operations at the time, and the Lincoln Project’s corporate counsel Matthew Sanderson. Steslow also encouraged his colleagues to remove Weaver from the organization.

Those allegations and others were discussed on subsequent phone calls with organization leaders in June and August, and employees were assured that the alleged incidents would be investigated. Weaver went out on medical leave in August, but as the presidential campaign moved into the summer and fall, there was no formal resolution.

No evidence they buried the allegations for “business reasons”? It’s a fundraising and PR group that would be harmed by the story. That’s their business reason. https://t.co/tvIaFcgeCh pic.twitter.com/EU3AzHNhIS

So far it doesn’t look like the Lincoln Project has rushed out another statement, but two of its founding members took to Twitter to share their thoughts on the AP story.

Another Lincoln Project co-founder Rick Wilson chose not to deal with the AP revelations at all; instead, he bizarrely dismisses the AP as “Trump world” as he “Look! Squirrels” Orange Man Bad. 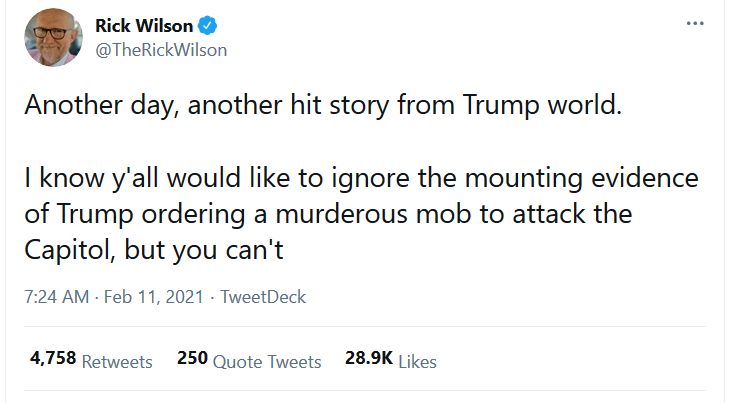 In addition to the revelation of allegations suggesting the Lincoln Project was aware of Weaver’s reported sexual predation at least as early as June of last year, the AP also provides some interesting information about what a grift the whole “project” is.

Read @AP on the Lincoln Project: 'Being anti-Trump was becoming very good for business. Of the $90 million Lincoln Project has raised, more than $50 million has gone to firms controlled by the group’s leaders.' https://t.co/5nscW9FmQF

AP: “The unexpected success of the Lincoln Project has extended a lifeline to some founders who have spent much of the past decade under financial distress.” https://t.co/HYGRJ8ueUr

When you read the AP piece on Lincoln Project, one thing jumps out (in addition to Weaver having owned a children's boutique).

Weaver's debt, tax lien, and terrible credit histories would have prevented him from getting an executive level job pretty much anywhere.

A group of grifters bury any news that might affect their grifting. Not a surprise.

It explains quite a bit, doesn’t it? The party of criminals and perverts.

Poor Kellyanne’s daughter: what a sicko father to grow up under. Yech.

This double-underlines the already well-known fact that the Lincoln Project is populated by dirtbags.

The Joseph Goebbels media is signaling to the Lincoln Project that the grift is over, and their services are no longer required. The Lincoln Project’s main goal – delivering the country into the hands of the Communist Party – is fulfilled. Now scram, perverts!

Have Twitter and Facebook terminated the Lincoln Project’s social media yet? When can we expect banks and credit cards companies to close the Lincoln Project’s accounts? Have Rick Wilson and George Conway had their late night interview with the FBI with guns pointed at their heads by trigger-happy agents? All that and more will happen if the mandarins of the Lincoln Project do not take the hint and quietly vanish.

Lie down with leftist dogs, and you wake up in a grave, about to be buried alive.

Uhg, what a bunch of twats. The mere fact that they didn’t act at the time in order to progress some kind of investigation and instead hid the truth is damning. There are two separate and distinct crimes here the weaver allegations and the cover up. Clearly the former is in the process of being established (though it does look bad I prefer the process of an investigation to run its course before pronouncing guilt) but the later is clearly indefensible.

In June Trump was still president, they could not quit until their mission was accomplished. Trump’s genius seem to be getting his enemies to gather and destroy them selves.
Concentrated vileness seems to be fatal