I’ve been watching with some mixture of mild surprise, horror, and disdain as the Democrat’s activist media arm whiplashes from attacking President Trump with all hate all the time to fluffy, chills-enthusing fanfic about Joe Biden.

Kamala Harris is also getting the fawning treatment reserved by the biased media for Democrats and antifa.  During her brief, failed run for the 2020 Democrat presidential nomination, the Washington Post did a story focused on her close relationship with her sister (the one who reportedly caused so many problems among the campaign staff).

The piece contained an unflattering description of Harris comparing campaign downtime spent walking on the beach to a prisoner begging for food and water.  It’s a horrible comparison, but it seems she is saying that if the hungry, thirsty prisoner got the begged for “treat” of a “morsel of food” or sip of water, it’s just like strolling on the beach with her husband.  Only hilarious. Or something.

Judge for yourself (via archive link of original WaPo story): 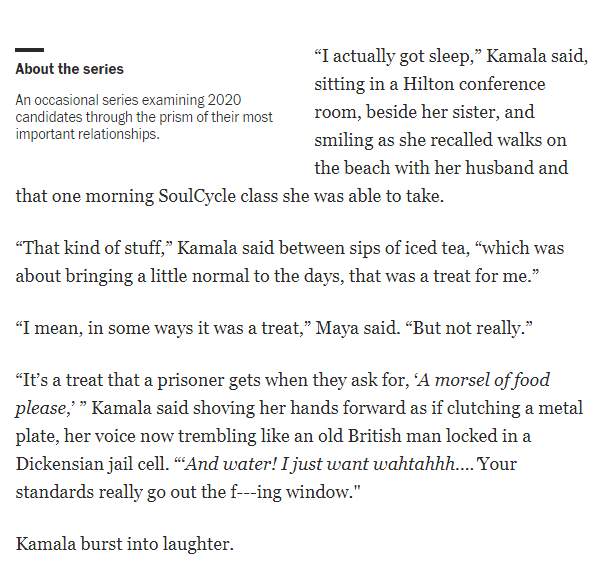 Obviously not a flattering portrait of Harris.  At all.  In fact, it’s problematic on a number of levels, so . . . it had to be memory-holed.

The Washington Post flat out deleted an anecdote about Kamala Harris joking about prison inmates begging for water from a 2019 profile https://t.co/yhjzEpWmQr

There was, as you can imagine, massive backlash to this bit of revisionist biography, and WaPo acknowledged their misstep . . . sort of.

UPDATE: As of 1:15 p.m. on January 22, The Washington Post has updated its website and URLs to restore the original version of the Kamala Harris profile detailed in Reason’s post, below.

Okay, so fine, they now have two “versions” of the same article, one with the unflattering but genuine moment with Harris being her cringe-inducing self for all the world to see, and another without it.  For what purpose?

As the backlash built on social media, WaPo explained it as follows:

So a little bit of “repurposing” and “updating,” you know, because reasons.

The Washington Post seems to have taken its “Democracy Dies in Darkness” slogan and turned it into their mission statement.

She is worse than a Mad magazine parody….and the media gushes.

How do we stop this? Nothing seems to work. I’m sick of complaining.

Actually surprised more they put it back. Who was going to call them on it? Some other Democrat Propaganda Ministry department?

She is what you call the exact definition of

“The Washington Post seems to have taken its “Democracy Dies in Darkness” slogan and turned it into their mission statement.” “That’s a Feature, not a bug.” – Jeff Bezos

Bezos is the primary reason I went “Galt” on Amazon. Pulling the plug on Parler was the straw that broke my camel’s back.
I couldn’t see myself assisting this man any longer.

“Remains available in print” because we don’t have the ability to un-print ink on paper. Or, retrieve those issues, yet.

What an incompetent bunch of Bolsheviks! The communists in the USSR perfected the “technology” of disappearing printed articles back in the 1950s. When Stalin’s secret police master Lavrentiy Beria fell out of favor everyone who had bought a New Soviet Encyclopedia was mailed an expanded article on the Bering Sea. With instructions to cut out the entry on Beria, leaving a stub of the pages. Then paste in the additional pages on the Bering Sea.

Of course, the people who got the articles did as they were told as they didn’t dare risk being caught with an unmodified encyclopedia. Perhaps we just lack the surveillance powers and informant network of the KGB. But Pelosi, Schumer, and Harris are working on it.

Amazon, Google, Tweeter, and TV now have an ethical obligation to persecute and deplatform this reprehensible advocate for the callous contempt of others.

That’s how we were told this works now…

How does she know about prisoners begging for food? When did she visit the State prison where the begging happened? Who were the prisoners who begged for food in front of her? Why didn’t she feed them? Nancy Pelosi said: “We feed them.” Guess that’s not good enough for Kamala. I hope some real reporting happens on this incident.

The British accent and mention of a “Dickensian jail cell” turn this into a literary reference, not a life experience. All it means is that she once bought a ticket to “Oliver!”

The descriptors are the WaPo writer’s, not Kamala’s. For all we know, she was trying for a Southern accent or a New England one that the writer “heard” in literary terms.

How much literature (especially by dead white males) do you really imagine Kamala has read? Ever? Of course I could be wrong, she could be extremely erudite and trot out literary references on a regular basis, and I’ve just never heard them. Do you know of any other times she’s made a literary reference (that didn’t involve her copy of the Communist Manifesto or White Fragility)?

No, therefore the “ticket” reference.

Harris is disgusting, an example of incredibly poor character.

Yet, with further manipulation of the truth from our “highly respected” media. Until the media and even our own politicians can explain how six states all stopped counting at the same time and came back to counting at the same time with a reversal of the election, I will never believe we had a fair election. Banana republic election for a Now …. Banana Republic (sad)

Easy. It didn’t happen. You are making it up.

Pretty much. Anything that has been explained and/or denied by the media, politicians, and Milhouse should be met with a high degree of skepticism and warrants further examination, both of which will be vehemently denied by them all with cries of indignation, foot stomping, and pouting.

I’m not sure why anyone is surprised by this. I seem to remember that during Harris’ short lived primary campaign the California State Prosecutors website deleted any documents or webpages that referenced Harris and her abysmal prosecutorial record in regards to jailing blacks etc.

“I’ve been watching with some mixture of mild surprise, horror, and disdain…”

Yeah me too, Fuzzy. That picture of Kamala Harris had that effect on me. I don’t know if I’ll ever be the same after seeing that. You should post a warning like “Viewer discretion advised” when you post graphic material like that.

And keep in mind, that’s AFTER plastic surgery.

The real question is when they will think people forgot they got caught so it is safe to redo the stealth edit.
I wouldn’t bet on more than a couple of days.

I don’t normally comment about peoples appearances. In this case I will make an exception. Has anyone seen Kamala Harris’s teeth and AOC‘s teeth in the same room together at the same time?

If Harris didn’t giggle, she literally wouldnt’ have anything to say. No wonder Willie Brown kept his dick in her mouth.

For the faux outraged and the uniformed:

Willie Brown admits it: Kamala Harris slept her way to the top:
https://www.americanthinker.com/blog/2020/08/willie_brown_admits_it_kamala_harris_slept_her_way_to_the_top.html

My guess is WaPo’s Stalinist stealth editing of history is just getting started.

I can hear other countries laughing at us…

These are ugly, smarmy people. They are exact representations of the places they’ve created, all shiny, glowing, glitzy, and smiling on the outside but corrupt, festering, seething, murderous pits below the surface. SanFrancisco, LA, Seattle, Atlanta, Baltimore, New York City, Philadelphia, Washington, DC…the examples nationwide are too numerous to count.

This is why you have to copy everything the left writes.