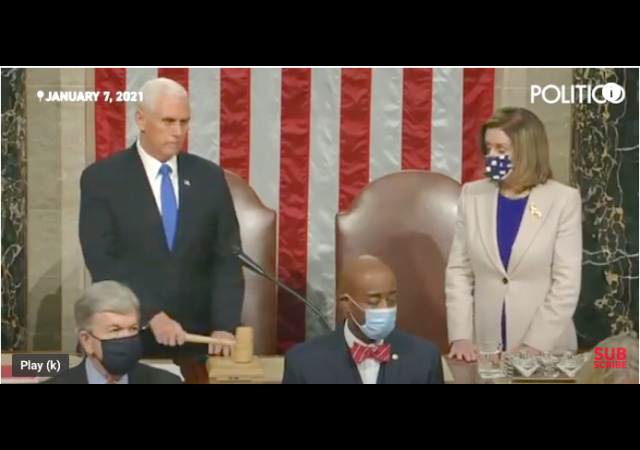 …fight to ensure that only legal votes were counted. While this represents the end of the greatest first term in presidential history, it’s only the beginning of our fight to Make America Great Again!”

Tensions flared on the floor late at night:

Rep. Morgan Griffith (R., Va.) complained that Republicans had been accused of lying and asked that the words be stricken from the record. But House Speaker Nancy Pelosi (D., Calif.) denied the request.

In the background, Rep. Andy Harris (R., Md.) and Rep. Colin Allred (D., Texas) yelled at each other to “sit down,” ‘no you sit down,” and then confronted each other in the aisle, according to a report from a CNN reporter. Other members headed toward the near-fight before the tension was defused.

I think that was obvious in Nov 2016. The left retook power and you will never get them out again. The country is done unless we stop playing by the old rules.

you know what makes a good congress critter?
one smart enough to always be slightly scared of their constituents.
not trembling in fear, thats counter productive, but always knowing if they stop enacting the will of the people there will be repercussions.
535 dumbasses are now on notice.

The problem is, they’re dumbasses. That means they won’t learn from this, instead they’ll double down and ensure the violence doesn’t stop.

Well, they had to steal the election to get socialism established by a corrupt 78 year old ex-senator. Now how will we ever get rid of it?

In the wise words of our future if only temporary president. “They always say, Biden dismisses China; I don’t do da-di-di-dismiss China. But if we invest in ourself, China will not only, as they say, new stoon a come a from climb on Delaware not a patch on our team.”

After banning Trump, If you haven’t deleted your twitter account by the end of the day then fuck you.

I’m waiting for Trump. I’m hoping that one day he announces that he is leaving twitter and going to parler.

At that point, I’m hoping all Trump supporters delete their accounts over a period of a few days, and then we watch as numbers decline and their stock tanks.

The Uniparty has spoken. Trump will now be transformed into Emmanuel Goldstein. The Party needs someone to hate, to pour all their failings upon. All the GOP who think that they can gain from this are fooling themselves. The rush to the Left in a #METOO moment is for naught. The Left does not believe in redemption for “sinners”.

I wish that the GOP would learn something in their coming years in the wilderness. G_d took 40 years to let the old and timid die off before a stronger younger devout Israel answered the call. That was Israel, that was G_d… This is the GOP.

My question is, are they incapable of learning or too scare of what that knowledge will require of them?

I hope that Trump quickly acts to create a third party, and that exodus of dissatisfied Dems and Reps hallows out both parties, leading to Trump’s reelection in 2024.

Biden did not win.
Congress certified a fraud.

And Pence, a self-professed Christian, participated in an “election” based on fraud. I never was high on Pence, even in 2016, given his wimpish nature (he collapsed upholding religious freedom principles when governor of Indiana).

“Even aside from impeachment and 25th Amendment talk, Trump will be an ex-president in 13 days. The fact is that getting rid of Trump is the easy part.

Cleansing the movement he commands, or getting rid of what he represents to so many Americans, is going to be something else.”

Now they want to cleanse Trump supporters. How about trains rides through the country side? Maybe some nice showers will do it? Or schooling in our reeducation camps?

Can’t have any of those smelly individualists fouling our sweet socialist paradise.

The use of the word “cleanse” was not accidental. The Communists are going to lead a genocide.

it will wind up being their own… they shot first, yesterday, murdering a patriot in cold blood.

but it’s who shoots last that counts.

The article didn’t say that it said cleaning up the movement.

Andrew Weissman has suggested disbarring any attorney that worked for Trump

Reading that reminded me of why I pay little attention ABC, NBC, etc. It is a long string of bald faced misrepresentations and out right lies.

Lets hope the transition of power was just as smooth as the last one.

Anyone know how to make a “grandpa” Biden balooon?

There’s substantial evidence that the “shameful demonstration” was a false flag operation.

Is their? I’ve seen none so far .. you have a good source?

We need to move on from the hellhole the former America is becoming.