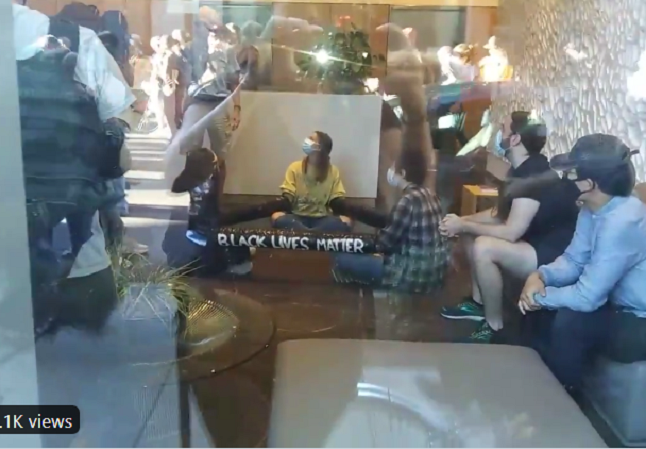 Democrats reign supreme in the 2020 ‘failure of leadership’ category.  One of the more egregious, ludicrous, and kind of sad examples of failed leadership is that of dangerously feckless Portland, OR mayor Ted Wheeler.

Bumbling and tone-deaf, the hapless Wheeler made a complete donkey of himself by showing up at a violent, destructive antifa/BLM ‘protest.’  His effort to show his solidarity with the fringe freaks’ ‘struggle’ was utterly cringeworthy.

.@tedwheeler says, “I saw nothing that provoked this response” when asked about his thoughts on federal law enforcement deploying tear gas.

The building had been set on fire and rioters were throwing explosives. #PortlandRiots pic.twitter.com/M21iOcDfLa

Unswayed by this utter humiliation and blissfully unaware that his simpering weakness emboldens rather than appeases, Wheeler then chose to abandon his home at the orders of violent antifa/BLM mobs.

On the same day @tedwheeler rejected federal law enforcement resources, a mob of DSA, antifa & BLM radicals gathered at his condo. They’ve locked themselves together in the lobby & demand his resignation & the defunding of police. #PortlandRiots pic.twitter.com/C4daFHarx7

Wheeler now suggests that giving a free rein to antifa/BLM mobs didn’t work out as he hoped.  Apparently, rolling over and being your enemies’ willing victim is a bad idea.  Who knew?

This is the mayor who spent months blaming the president for the violence in his city. Delivering a different message now. https://t.co/449lkTguVQ

So wait, is Wheeler refuting Joe Biden’s mocking assertion that antifa is “just an idea” and not real?

Wheeler laid out the “who, what, when, where and why” of what happened Thursday.

“The who: violent antifa and anarchists,” the mayor said. They rampaged through downtown Portland causing tens of thousands of dollars of damage with spray painting, window breaking, fires and fireworks.

“Why? This is the hardest question of all to answer,” Wheeler said. “Why would a group of largely white, young and some middle age men destroy the livelihood of others who are struggling to get by?”

. . . . “My good faith efforts at de-escalation have been met with ongoing violence and even scorn from radical antifa and anarchists,” Wheeler said. “In response it will be necessary to use additional tools and to push the limits of the tools we already have to bring the criminal destruction and violence to an end.”

Wheeler said he is committing to 3 things:

“Federal, state, county and local law enforcement to convene to deal with anarchist violence. as soon as possible,” even next week.
Calling on state legislature to increase penalties for repeat offenders
“I believe people convicted of criminal destruction be required to meet with those whose businesses they damaged,” Wheeler said, “and be required to do public service.”

Wheeler acknowledges that his groveling appeasement is met with (frankly, justifiable) scorn, but he just can’t seem to grasp why that is or what to do about it.

For example, his “commitment” to vague calls for “convening” federal, state, county, and local law enforcement to “deal” with anarchist violence (in what way? Particularly if DA’s aren’t pressing charges?), “calling on” legislation, and instituting state-mandated “meetings” of criminals and their victims are laughable and naive.

This is an appeasement pig all dolled-up with glossy lipstick.

I’ll translate for you.

‘Now that it’s no longer politically useful for liberals we’re going to stop them from burning the city down.’

The problem is that they have loosed the lion on the battlefield and now it is doing what lions do.
Liberals never think of future consequences. It is always about gaining power today.

The people get the government they deserve.

You, individually may not deserve this government, but the people, writ large, do.

If I owned a business I’d still move out. Let them stew in the non taxes antifa bums don’t pay.

One of the Great Truths “If bad behavior is ignored or rewarded than there will be more bad behavior”.

Good for him. Has he had an epiphany and learned his lesson? I’m not holding my breath, but if he is willing to stand up and call out the Antifa thugs for who and what they are, then I can be big enough to give him credit for finally doing the right thing.

Calling them out is not enough, start using real bullets, cull the Antifa herd.

You created this monster. Now deal with it.

Welcome to 6 months ago, mayor. Better late than never, but better never late.

Must be having an election soon.

If you can’t get rid of Ted Wheeler and his friends then I recommend leaving Portland.

My neighborhhod, the Hawthorne area, is being selectively ruined, I believe by real estate interests who are trying to drive down prices of properties. It appears like mayhem but I think it is a well coordinated attack. If you close the bars at 10PM, the vandals have many more hours at night to do their work unobserved. Someone is buying the cases and cases of spray paint and there are never empty cans left behind. Hmmmmmm!

Wheeler has learned nothing that he did not already know. He is just following updated orders regarding the Portland element of the attack plan.

New words. Same actions. Do not trust him.

Sow the wind, reap the whirlwind

Santa must have brought Wheeler a pair for Christmas. Too bad there are no instructions for use.

After the Biden “win”, the Progressive Estabishment told AntiFa to stand down. The problem is, AntiFa did not stand down. Now, that societal violence is no useful, to the Establishment, the good little political foot soldiers, such as Mayor Wheeler, are simply following their most recent orders, to put a leash on the street soldiers. Whether this will work, or not, is unknown. BLM, being in it more for the money than for ideological anarchy, will likely be more tractable, until they begin to run short of money. AntiFa, on the other hand, has another agenda.