No mention of when, or if, Parler will be back online 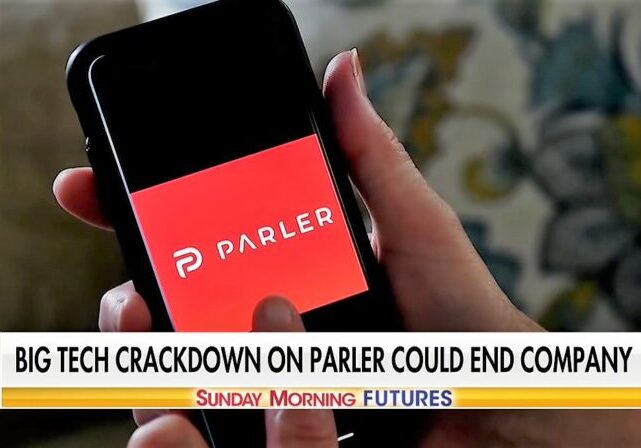 Parler’s app was pulled from both the Apple and Google app stores and could well have survived, but then it was shut down by Amazon Web Services.  It has been dark ever since . . . until this weekend.

An LI reader noted that the site’s url leads to a message from Parler CEO John Matze, so of course I had to check it out for myself. 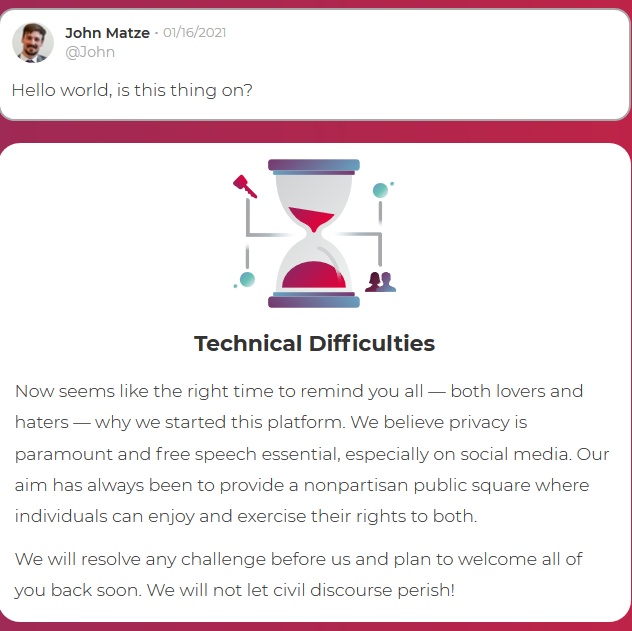 This is the extent of what we know at this point, though CNN Business reports that Parler has found a new web-hosting service in Epik.

Parler’s website suddenly reappeared online Sunday afternoon with a message from its CEO, John Matze: “Hello world, is this thing on?”

The message, dated January 16, implies that the social network popular with members of the far right has found a new online hosting platform, after Parler was booted from Amazon Web Services on January 10 in the wake of the Capitol siege.

Parler now appears to be hosted by Epik, according to a WHOIS search. Epik is a hosting platform that supports Gab, 8chan and other services often used by members of the far-right.

Prior to hosting Parler, Epik issued a lengthy statement blasting what it said was a “kneejerk reaction” by major companies of “simply deplatforming and terminating any relationship that on the surface looks problematic or controversial.”

This use of the term “far right” reminds me of my late, and staunchly Democrat mother. She was completely in capable of describing somebody else conservative without using the prefix word “ultra”.

That was my first thought, “far right”

But if you’re that far left, of course everything else looks “far right”. Even a centrist would look like an extremist.

This is even more evident in Europe. ‘Right wing’ and ‘conservative’ are not the same terms as here in the states.

European right wing and conservative people/parties are very far-left socialists. However, since they are right of rabid full blown communism, they are demonized as ‘right wing’ and ‘conservative.’

That was from the far far ultra left CNN. I’m considering joining Parler, but I’m a middle of the road conservative-American.

Best to join both, backup.

True. I seem to recall Instapundit making this point at least 10 years ago, maybe longer. There seems to be no such thing as a right that isn’t “far” or “extreme” or “ultra”. Meanwhile almost no position is so far to the left as to merit any of these adjectives.

Another use of “ultra” that most Orthodox Jews find very annoying is the use of the term “ultra-orthodox” to refer to the black-hat-wearing sector of Orthodoxy. It manages to be insulting to both the black hatters and the other-color-hatters, and doesn’t really convey any meaning. “Haredi” isn’t any better; it means nothing to non-Hebrew speakers, but it doesn’t really mean anything significant to Hebrew speakers either. Referring to the two major groupings by their haberdashery preferences at least reliably identifies them, without pretending that it says anything meaningful about them.

Parler’s case against Amazon is before U.S. District Judge Barbara J. Rothstein. A Carter appointee she is likely to take the Roberts approach. Let the patient die and call it moot. Tough draw for Parler.

Short of a shooting war, nothing but continual prosecutions is going to stop this commie BS cold, so maybe it’s the states thta can make it happen. Those without a bought-and-paid-for Soros justice lineup, of course.

Well yeah that’s how a free society works. The point of the 1st Amendment is to protect vile, hateful, evil rhetoric. Speech that ‘everyone’ agrees with doesn’t require protection.

That said, the government can’t prevent someone from voicing threats, that’s censorship, it can however take note of who said what and follow up with a visit from the PD or FBI, DEA, ATF or Secret Service.

Believe it or not they can even do that with your d/progressive anarchist buddies.

Americans take 1st and 2nd Amendment rights seriously. Is there anyone who cannot understand why these arrogant punks need to be reigned in. Their businesses need to be eradicated, and ideally they end up stripped of all assets. They are truly evil people.

Just a quick heads up, sometimes a comment is removed for a failure to . . . um, self censor, that necessarily means that any comment replying to it is removed (there is no way to leave up a reply to a comment that is no longer there). So, just as an FYI, some disappearing comments are collateral damage. 😉

The irony, of course, is that antitrust is a gigantic Democrat bludgeon… but you won’t hear any Democrat politician even approaching that word now, assuming they can’t avoid discussing the social censorship issue entirely.

At what point does LEO follow up or inquiry rise to level chilling free speech. I suspect that is going to become an issue in the future.

Have none of the social media, still from what I see anything from a Leftist is protected, anything Conservative is hate, a lie that must be silenced.
Still don’t get why a Colorado Christian baker must be made to make a product but a Leftist social media corporation can discriminate at will.

I was on Parler for a few months before the vile BIG TECH stalinists targeted it in their purge. It was an ok site, but I found it ‘clunky’ and 2nd rate in terms of user features. Perhaps it will come back better. Who knows?

I’m soon to be on GAB. It’s a much superior interface, and GAB CEO appears to be more savvy and aggressive in kicking the nuts of these vile stalinists.

I dumped Mozilla Firefox, too, after its nutwad CEO demanded more deplatforming of us ‘deplorables.’ EFF em.

I installed BRAVE browser, instead. It’s a vastly superior product created and run by – guess who? The former Mozilla CEO who was persecuted out of Mozilla for his support of California Prop 8 a few years back.

Eff em. Eff em all till they bleed out.

Having finally opened an account on gab, I was pleasantly surprised to see it seems like a Facebook clone, including interface. Much easier to navigate than Mewe, where I also have an account. Now- we simply need more Facebook users to migrate to gab than mewe….

I repeatedly had trouble signing up.

Gab’s interface is lovely. When I can get it to load. They need bandwidth, and faster servers. Yes, I know they just upgraded. Needs more upgrade.

I’m on Gab now but also love Parler and hope it comes back. In addition to Brave their is also the Dissenter browser from gab, which is based on the open source Brave browser. It includes a unique plug in which allows users to post comments on any URL they visit, regardless of whether that sight has an official comment section.