Mexican President López Obrador: “President Trump has been very respectful of us, and we have reached very good agreements.” 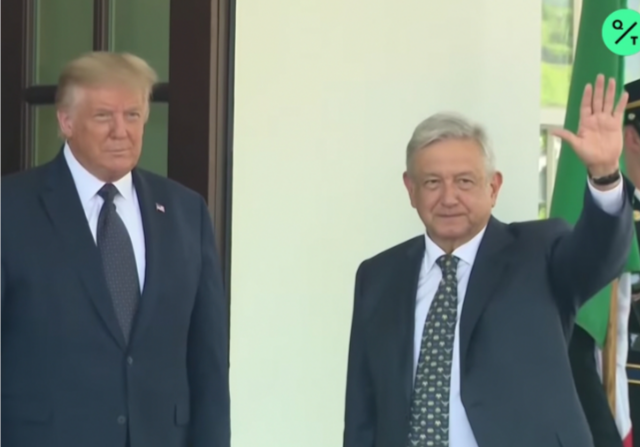 President Trump enjoyed a great working relationship with Mexican President Andrés López Obrador, who took office two years ago. He once described the Mexican leader as a “cherished friend.”

The U.S. president had been appreciative of Mexico’s measures to step the inflow of illegal immigrants from south of the U.S. border.

“Mexico is doing more to help us than the Democrats, who are doing nothing,” he said in June 2019 while talking about illegal immigration.

In November, President López Obrador praised his U.S. counterpart, saying: “President Trump has been very respectful of us, and we have reached very good agreements.”

It was an unlikely about-face for López Obrador, a left-wing nationalist who as a candidate for president criticized Trump for his derisive comments about Mexican immigrants in the U.S. and who wrote a book demanding respect for Mexico called, “Listen, Trump.”

But the world leaders became improbably close allies. López Obrador waited six weeks to congratulate Biden on his victory and defended Trump when he was booted from Twitter after the attack on the U.S. Capitol.

Many analysts see conflict ahead for the U.S. and Mexico, in part because López Obrador and Biden have very different opinions on climate change, renewable energy and security cooperation.

In early November, President López Obrador took flak from the U.S. Democrats and the mainstream media for refusing to congratulate “President-Elect” Joe Biden amid charges of voting irregularities made by President Trump and his legal team.

With President Trump out of office, one can expect a more vindictive tone from the Democrats and the mainstream media against the Mexican government for working with the previous administration, particularly on illegal immigration.

Putting an end to illegal border crossings south of the border has been on top of the Trump administration’s plan. With his first term in the White House coming to a close, President Trump visited Texas to inspect a wall section along the U.S.-Mexican border. He cautioned the incoming Biden administration against undoing his legacy on the border wall and immigration.

“We can’t let the next administration even think about taking (the border wall) down, if you can believe that,” President Trump said. “I don’t think that will happen. I think when you see what it does and how it’s so important to our country nobody’s going to be touching it.”

Trump was very good at creating win-win deals. Slow Joe & Ho will never do the same.

They create win-win deals all the time. They personally exploit by allowing other countries to exploit while the US population gets grifted.

That is very upsetting to me, and that media bias is partially why I want to tell those calling for unity (submission) to go eat a bag of Richards.

He knows an open border means the cartels are going to dramatically increase in power.

He will follow Obama’s “fast and furious” program giving weapons to the cartel.

Why not. it worked the first time and the cartel cash sure helps Democratic politicians.

The media narrative has been that the Whole World hates Trump. Not only has AMLO recently praised Trump, he also criticized the Big Tech movement to erase Trump. Also note that Canada doesn’t like Biden’s intending to kill the pipeline. But Democrat Presidents are friends with the whole world, doncha’ know?

Emigration reform to mitigate progress of [catastrophic] [anthropogenic] immigration reform and collateral damage at both ends of the bridge and throughout is a compelling interest for all nations. And, of course, the good neighborhood protocol is, with rare exception, of mutual interest.

Interesting to note: Mexico has not be corrupted by the Soros/tech/Chicomm cabal – whereas Canada, Germany, etc have.

You’ll soon see the cartels mysteriously gaining power (they are the Antifa/BLM of Mexico).

So AMLO is a “white supremacist” now too? (Sarc)

Nice to hear that. I really respect him holding off on congratulating Biden, even though they differ on many policies. That speaks volumes. And knowing that he appreciates Trump for helping Mexico decrease their number of illegal aliens. Hurts every country they go through.