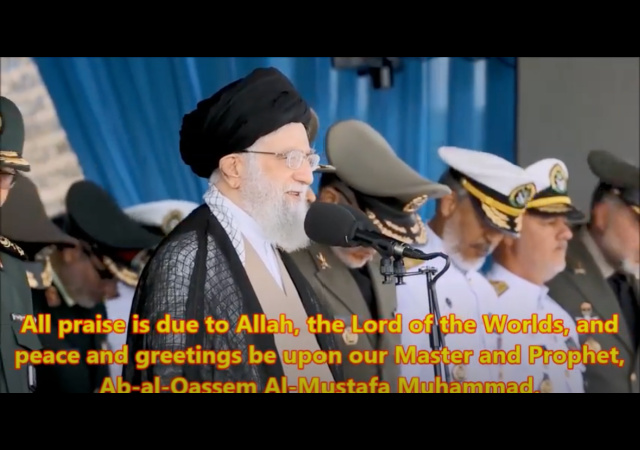 Iran is holding a series of military drills in the Arab Gulf region as President Donald Trump’s term comes to an end.

Tehran launched a missile drill in the Gulf of Oman on Wednesday, the third major drill by the regime in less than two weeks.

In recent years, Iran has repeatedly threatened to close the Strait of Hormuz, the world’s busiest oil transit chokepoint. Tehran has backed up those threats by attacking several Western-owned tankers and targeting Gulf Arab oil facilities.

Iran’s navy began a short-range missile drill in the Gulf of Oman on Wednesday and inaugurated its largest military vessel, state TV reported, amid heightened tensions over Tehran’s nuclear program and a U.S. pressure campaign against the Islamic Republic.

The two-day missile drill was being held in the gulf’s southeastern waters and two new Iranian-made warships joined the exercise: The missile-launching Zereh, or “armor,” and the country’s largest military ship the Makran, a logistics vessel with a helicopter pad named for a coastal region in southern Iran. (…)

In recent weeks, Iran has increased its military drills. On Saturday, the paramilitary Revolutionary Guard held a naval parade in the Persian Gulf and a week earlier Iran held a massive drone maneuver across half the country. (…)

The Iranian regime is also flexing its military muscle amid media reports of incoming Joe Biden’s administration willing to re-enter the 2015 nuclear deal.

Encouraged by the prospect of Obama-era policies returning, Iran in recent weeks has ramped up its nuclear program.

On January 2, Iran announced plans to enrich uranium up to 20 percent at an underground nuclear facility “as soon as possible.” The BBC called it the “most significant breach of an international nuclear deal so far.” The increased enrichment brings the regime closer to building a nuclear arsenal, media reports confirm.

Communist China, with which the Biden team reportedly opened backchannel talks in November, has also demanded the incoming Democratic administration rejoin the 2015 deal.

“The US shall return to the Iran nuclear deal as soon as possible and without any preconditions, and the US should also scrap all sanctions imposed on Iran, other third-party entities and individuals,” Chinese Foreign Minister Wang Yi declared in a recent video conference addressing top European Union officials and other four signatories of the 2015 nuclear agreement.

The EU foreign ministers have also echoed Beijing’s sentiments, calling upon Biden to bring back the U.S. within the Iran deal’s folds without any pre-conditions. Such a move would mean an end or phase-out of sanctions on Iran placed by the Trump administration, further emboldening and strengthening the world’s biggest sponsor of terrorism.

“Al-Qaeda has a new home base: it is the Islamic Republic of Iran,” Secretary of State Mike Pompeo revealed on Tuesday.

The killing of Al Qaeda’s second-in-command, Abdullah Ahmed Abdullah, in a joint U.S.-Israeli covert operation near Tehran in mid-November, highlights the jihadi group’s penetration inside Iran. Maryam bin Laden, Osama bin Laden’s daughter-in-law, who was being groomed for a leadership role in Al Qaeda, was also eliminated in the CIA-Mossad counter-terrorism raid.

I’d avoid appearing to be the villian from a Tom Clancy novel if I were running Iran, but that’s just me.

Practice in shooting down civilian aircraft?

This isn’t news: the Ayatollah repeatedly broadcast these threats by Iran of our destruction on Twitter.

israel is the true sheriff in the middle east–regardless of who occupies the whitehouse, israel will never allow iran to possess(let alone deploy)nukes

Prophesy will not be denied.

Here’s Israel’s problem: in a war against Iran, it will deplete itself rather quickly of men and missiles.

With biden in, Iran will now have the Bomb. Crazy as the Iranian leaders are, they’ll take a 10% hit in population, because that 10% hit is Israel’s entire population.

If Israel has the resources through it’s submarine fleet to wipe Iran off the map, that’s another story.

But if there is a ground war of attrition, Israel is doomed, unless India (Israel’s new partner in many areas) rushes in men and arms. With Biden in, and Harris likely to be shoved into his slot (this will be confusing to her at first, because with any advancement of her career was due to things shoved into her slot), Harris will turn American military help away.

The left is on the move, and they’re doing a great job it.

We have to do better.

The Iranians know that pallets of cash are in play and Harris will gladly oblige.

You have to think they have fantasies of a Harris visit, in the back of a tent, and on her knees. She’s probably having the same fantasy: she gets to visit her fascist heroes, and she won’t have to make a fool of herself by talking.

Here, just as with the DPRK, we see the influence of the PRC. Not only is the Biden administration going to be conciliatory to Iran, unless it needs a war to survive domestic politics, it will be a wholly owned subsidiary of the PRC from the top down.

The biggest problem with Iran is that it is not controlled by civilian authorities. It is controlled by the Islamic Revolutionary Guard Corp, a military group composed of religious fanatics. It operates almost totally autonomously from the civilian governmental structure. And, the IRGC is more than willing to assist the PRC in destabilizing the Middle East.

Biden will make an excellent muslim and DOKTOR Jill will be much easier to observe behind a veil of Hefty garbage sack.

Traitor Joe and his wife Dr. Pepper are not long for the White House. The left’s handlers are licking their chops to put a completely malleable, morally bankrupt puppet like Harris in the White House.

They did it with Obama, and they’re about to do it again.

Btw: give what we’ve discovered about the absurdity of using “voting software” count votes (what happened to adding machines?), it is like that despite his losing the debate to Candy Crowley, Romney night actually had won the 2012 election. And Nancy Pelosi might not have won her congressional set. Or all those Orange County democrats miraculously elected should not have won.

The only voting machine we’ll ever need is an old-time adding machine. Voting software on it’s face is a bad joke.

Iran practices, I think we should also do so, with Iran as ground zero. They worship Allah, a barbarian. When dealing with barbarians, it is necessary to lower ourselves to their level, just long enough to squash them like bugs.

Y’all ready for more “Kabuki” theater from the MSM?

I killed cable TV 6-7 years ago, I do not miss NBC, ABC, CNN, etc. They only use news as cover to deliver propaganda. I enjoy Tucker, the rest of Fox not worth the time.

The Iranian Islam will be in the Lincoln bedroom before the IRS gets around to counting Hunter’s money.

Genetically, Iranian and kamala’s genes deserve to be together.