Merkel’s Spokesman: “…chancellor considers it problematic that the accounts of the U.S. president have now been permanently blocked.” 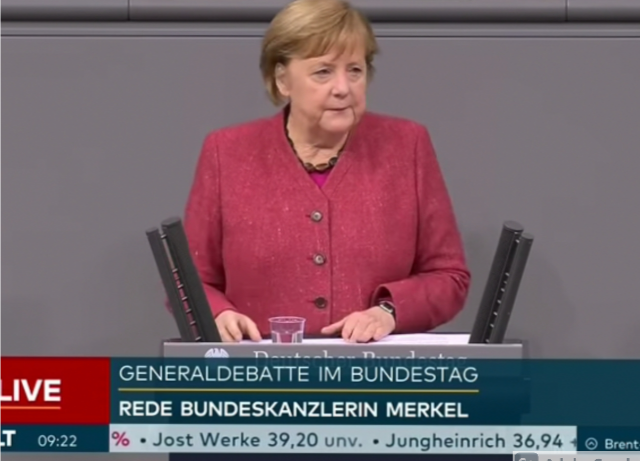 The decision to silence a sitting head of a state on the web should only be taken by the country’s elected representative and not by “the management of social media platforms,” Seibert said.

“This fundamental right can be intervened in, but according to the law and within the framework defined by legislators — not according to a decision by the management of social media platforms,” Seibert said. “Seen from this angle, the chancellor considers it problematic that the accounts of the U.S. president have now been permanently blocked.”

Politico covered the criticism of Twitter’s decision by Germany’s Merkel and other European leaders:

On Monday, a spokesman for Merkel said Twitter’s Trump ban was “problematic.”

“The fundamental right [of freedom of expression] can be interfered with, but along the lines of the law and within the framework defined by the lawmakers. Not according to the decision of the management of social media platforms,” government spokesperson Steffen Seibert said.

Still, “The German government is convinced that social network operators bear a very high level of responsibility … for ensuring that political communication is not poisoned by hatred, by lies, by incitement to violence,” Seibert added.

French Finance Minister Bruno Le Maire, while condemning Trump’s “lies,” also expressed his disagreement with Twitter’s ability to unilaterally decide to remove the American president from the platform. “What shocks me is that Twitter is the one to close his account. The regulation of the digital world cannot be done by the digital oligarchy,” Le Maire said on France Inter Monday morning.

Le Maire oversees the ministry for digital affairs, whose junior minister Cédric O also raised questions over the weekend. “The regulation of public discourse by the main social media companies with regards only to their Terms and Conditions … seems, to say the least, a little short from a democratic point of view,” O tweeted on Saturday.

The comment comes days after Merkel blamed Trump for the Capitol Hill riots.

“I regret very much that President Trump not acknowledged his defeat since November and also again not yesterday. Doubts about the election outcome were stirred and created the atmosphere that made the events of last night possible.” she said on Thursday.

In the aftermath of the Capitol events, Merkel’s government has announced a new law to clamp down on “hate speech” on social media.

According to the proposed legislation, social media giants like Facebook and Twitter will hand over user data to German Federal Police based solely on the complaint. The police do not have to provide evidence of actual wrongdoing, the German media reported over the weekend.

While Merkel’s tone turned conciliatory, the German state media remain hostile to President Trump in its coverage. On Monday, Germany’s state-run Deutsche Welle ran an editorial titled “Stop Trump Permanently” in which the state broadcaster’s U.S. correspondent Ines Pohl demanded that President Trump “must be prevented from running for office ever again.”

Some officials and media in Australia also blasted Twitter’s actions.

“I’m not in favour of censorship – I think if people don’t like what they see on Twitter – well don’t go onto that social media platform,” Australia’s Deputy Prime Minister Michael McCormack said.

I wonder when the banks are going to freeze or lock out all of trumps ability to do business of any kind? I don’t just mean the campaign site, but the hotels office buildings and all that?

Today. They already started. They’re abruptly freezing all PACs and donations to conservatives and are ‘evaluating’ the ‘problematic’ content.

That move started today. Things are moving very fast. The socialist fascist authoritarians are moving as fast as they can. Before too many of the sheeple start noticing and questioning too much.

For example… Overnight Google shut down the ‘Second City Cop’ blog. A 15 year old blog that has been critical of Chicago corruption and Mayor Groot. And sympathetic to Trump.

The totalitarian Dem Long Knives have a long list they’re working through as fast as they can.

China Joe and his fellow fascists will probably ram through a ‘Domestic Terrorism’ bill by the end of January. Early Feb at the latest.

It will target Trump supporters.

I wonder is Ms. Merkle is starting to figure out who runs Barter Town.

Meh. She’s okay with it. This is just Angela of the forked tongue speaking.

Occasionally even Obama will criticize a socialist action – when he thinks the socialists have moved too fast ahead of public support. Not because he gives a hoot.

She’s right for the wrong reason…why am I not surprised.

Merkel is not objecting to censoring President Trump. She is objecting to the fact that mere private entities did it and not the government.

“This fundamental right can be intervened in, but according to the law and within the framework defined by legislators — not according to a decision by the management of social media platforms,”

If the social media companies were censoring Trump at government orders, she would be overjoyed.

By the way, we aren’t alone! When you hear liberals spout the dumb line that every other country is left of us and we are all alone on the US right, it’s a lie!

Look at this (read comments since it’s behind a paywall and you will find your compatriots across the pond!)

A watershed moment. The day when Post-Nazi socialist Germany started lecturing the USA about suppression of political speech in America.

Germany doesn’t even have a Bill of Rights or a First Amendment that allegedly protects free speech.

Actually, an excellent point. Did you ever think you would see the day when other countries criticized the US for suppression of speech?

Hard days are ahead, folks.

When a literal East German Communist lectures you on free speech you have gone off the deep end.