China Calls For A “Reset” In Relations With U.S. Under Biden Administration

China Calls For A “Reset” In Relations With U.S. Under Biden Administration

The South China Morning Post: “Chinese Foreign Minister, Wang Yi, called on Monday for Beijing and Washington to resume dialogue to reset ties … ahead of the incoming US administration under US President-elect Joe Biden.” 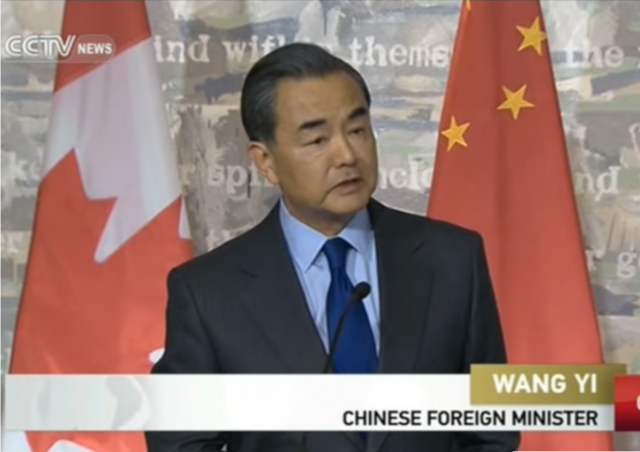 “Chinese Foreign Minister, Wang Yi, called on Monday for Beijing and Washington to resume dialogue to reset ties between the major powers after months of increasing hostility, ahead of the incoming US administration under US President-elect Joe Biden,” The Hong Kong daily South China Morning Post reported.

The “reset” China seeks is a departure from the policies undertaken by President Donald Trump in his first term. The Trump White House raised tariffs on Chinese goods to balance the trade deficit and protect U.S. manufacturers, ended Hong Kong’s special trading status amid Beijing’s clampdown on democracy, and forged a diplomatic and military alliance in the Asia Pacific to contain China’s expansionist designs.

Communist China views these measures as obstacles in its plans for global economic and political dominance. As U.S. National Intelligence Director John Ratcliffe warned this week, “Beijing intends to dominate the US and the rest of the planet economically, militarily and technologically.”

The South China Morning Post reported the comments of the Chinese foreign minister:

Chinese Foreign Minister Wang Yi called on Monday for Beijing and Washington to resume dialogue to reset ties between the major powers after months of increasing hostility, ahead of the incoming US administration under US President-elect Joe Biden.

Speaking during a video dialogue with the board of the US-China Business Council (USCBC), Wang gave suggestions to improve the countries’ tumultuous ties, including strengthening communication at all levels and expanding areas of cooperation – such as getting the coronavirus pandemic under control. (…)

“The most urgent task currently is for the two sides to work together to remove all sorts of barriers to achieve a smooth transition in China-US relations,” Wang said, according to a brief on the Chinese foreign ministry’s website.

“At the same time, based on the direction of mutual benefits for our two peoples and countries, we need to strive to restart dialogue, return to the right track and rebuild trust in this next phase of relations.”

The Chinese regime and its state-controlled media have been upbeat at the prospect of a White House run by Biden and his running mate Kamala Harris. Chinese President Xi Jinping last week congratulated the democratic candidate on his “win.” China looks for a “win-win cooperation” with the Biden-Harris administration, he said in his statement. Chinese foreign ministry has already greeted “Mr. Biden and Ms. Harris,” calling them the “choice of the American people.”

Beijing’s call for a ‘reset’ comes as people in Biden camp are reportedly in backchannel talks with the Chinese regime, the South China Morning Post revealed last month. “[P]eople closely associated with Democratic presidential candidate Joe Biden had recently contacted China and talked to Chinese think tanks about how to reset the relationship between the world’s two biggest economies,” the newspaper reported citing well-placed Chinese sources.

The news of these “Biden-Beijing” backchannel talks is particularly troubling given the serious corruption allegations surrounding the Democratic candidate’s son, Hunter. During the campaign, President Trump often referred to his rival as “Beijing Biden,” alluding to Hunter’s lucrative dealings with the Chinese state-run entities. A Biden family business associate, Tony Bobulinski, called Joe Biden a “compromised” candidate aware of his son’s questionable commercial interactions with the Chinese.

If China were truly serious about resetting relations with the USA, they would get a big red reset button like Hillary did.

And manage to flub the translation like Obastard’s incompetent State department did?

notamemberofanyorganizedpolicital in reply to Ironclaw. | December 9, 2020 at 2:43 pm

Ask all the Communist Chinese about this.

Eric Swalwell Should be Removed From Congress

notamemberofanyorganizedpolicital in reply to LeftWingLock. | December 9, 2020 at 1:20 pm

They can’t buy this.

Statistician in Texas Lawsuit Against Georgia, Michigan, Pennsylvania and Wisconsin Says Probability of Biden Winning Election Was One in …..

And by “reset” they mean that they expect us to bend over and take it with a smile, like it was before Trump.

Again, I emphasize that China has 5 times the amount of people as the USA. China can easily send a lot of high level spies and agents here without missing them.

Dear China: I know lots of secrets. Please send your prettiest whore right away. Thank you.

Put Hunter on a plane and send him over…

Herr Doktor Heinrich Kissinger is still alive; send him. He already has experience in selling us out. See: Nixon Administration.

A good Republican; not some traitor Democrat thank goodness!

…over a desert, or ocean, or artic, and drop him. Offer him a chance to by a parachute, for all his ill gotten gains.

Eager to start getting their money’s worth.

What’s the Mandarin for “go jump in the lake”?

Destroy their military bases on artificial islands. That would be an appropriate reset.

“reset” in this case means, make sure the routing numbers to the BUYden regime are correct before you send the cash.

Since Biden is obviously compromised vis-à-vis China, the news media will take over the role of ‘China critic’ (with a nod and a wink of course). The media couldn’t have been more pro-China with Trump as President but that will change under China Joe.

Here’s an idea for a truly effective reset: GET ALL US Companies out of China.

That election was pretty cheap in comparison if they get to railroad us again for the next 4 years.

“Calls For A” should read “Instructs Agents To” – at least that would be a more accurate headline, no?

They know they can buy Dementia Joe, he’s been for sale since the 70’s.

China asking for a reset in relations is just like an abusive spouse begging to be taken back and promising… “I swear I won’t beat you again” as the put you in a headlock and punch you in the face…
And yet, as sleepy Joe settles into office he will look for Deep State praise and for another channel for Hunter to steal millions. All the while woke corporations and the NBA will work to siphon more cash from the PRC as we will continue our slide into 2nd rate status thanks to fools like Joe.

They just want to get what they paid for. They supported Biden and the Dems in the elections, and they expect to get the influence they paid for. The Dems have already given them some payback with the two bills the Chinese asked them to pass in both the House and the Senate, making it easier for them to blame Italy or the US for the coronavirus.

In the Senate, it was the Vice-President Elect who was doing the bidding of the Chinese government, in return for their support:
https://swarajyamag.com/insta/kamala-harris-introduces-resolution-condemning-use-of-racist-phrases-like-wuhan-viruschinese-viruskung-flu