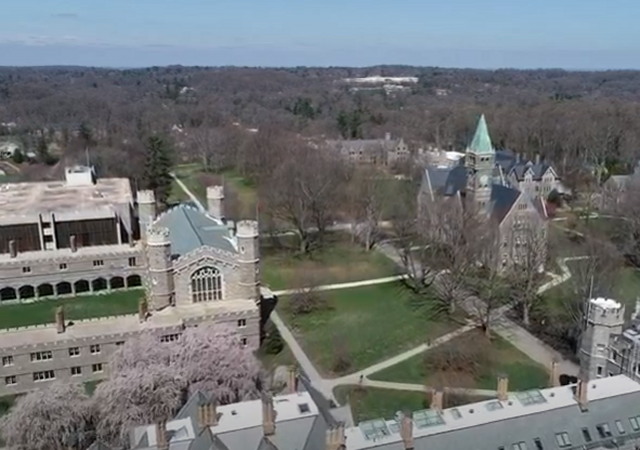 Bryn Mawr College, the liberal arts school for women in Pennsylvania, was shut down for weeks last semester because of a student-led strike following the death of a black man in Philadelphia at the hands of police.

The school appeased the strikers.

In fact, students and faculty members who tried to go about their daily business by attending classes and working were targeted and shamed by the strikers.

In a recent Quick Take, I posted an excerpt from Quillette, which was written by the parent of a student:

A Student Mob Took Over Bryn Mawr. The College Said Thank You

Last week marked the end of a chaotic semester at Bryn Mawr College, a small women’s liberal arts college located outside Philadelphia. During the final weeks, Bryn Mawr students, including my own child, scrambled to pick up the pieces following a student “strike” that exacerbated the serious preexisting disruptions associated with the COVID-19 pandemic. For a period of three weeks, few regular classes were held, activities were suspended, and student life (such as it was) became marked by the same toxic spirit of racism that the strikers claimed to oppose.

Bryn Mawr is affiliated with nearby Haverford College, whose parallel meltdown in November was documented recently by Quillette. These two selective and well-funded schools are part of a so-called Bi-Co arrangement, which allows students to participate in joint classes and activities. Both share a similarly progressive commitment to such causes as diversity, equity, and inclusion. And students at both schools generally are well-steeped in doctrines of intersectionality, “white fragility,” anti-racism, and all the rest.

Yet following the police shooting of Walter Wallace Jr. in Philadelphia, activists at Haverford and Bryn Mawr embraced the dubious claim that their extremely progressive campuses were actually contaminated by a dangerous climate of racism that (quite literally) threatened the survival of black students. In many cases, the ire was directed not only at administrators and non-ideologically-compliant faculty, but also at any student suspected of not supporting the strikers’ apocalyptic rhetoric, dramatic postures, and inflated demands. Anyone who sought to attend class, go to the dining hall, or even turn in schoolwork was denounced as a “scab,” and often faced acts of bullying.

Now, weeks later, the school is still bending over backward to appease the strikers.

It was one of many demands issued by the Bryn Mawr Strike Collective, a student-led group that organized a racial justice strike on campus during the fall semester.

The students’ demand called for “the implementation of a ‘reparations fund’ towards a yearly allocation of funds and resources to Black and Indigenous students in the form of grants for summer programs, affinity groups, multicultural spaces, and individual expenses such as books, online courses, therapy, and any and all financial need beyond the scope of racial justice work.”

Bryn Mawr leaders agreed to this demand by renaming the Dean’s Emergency Fund to the Dean’s Student Assistance Fund, doubling its allocation to $10,000 annually, and appointing a committee that includes representation of black, indigenous, and people of color staff and faculty, to administer the fund.

Shutting down the campus gets results and rewards.

Any and all government funding, including federally-backed student loans, should be cut from any organization that goes down this SJW rabbit hole.

I doubt the incoming education secretary will do any of that! Just the opposite, I imagine.

Another small college going down the drain

Another collegiate body floating at the high water mark.

Sure let’s raise tuition to give reparations (sarc). While were at at it, let’s adopt a handicapping system for test grading. Take 30 points away from the privileged to give to the unprivileged. The underprivileged deserve grades over 100.

Seems to me the students who attend these institutions would have gotten a heck of a better (and cheaper) deal by just getting certified as plumbers or auto mechanics.

I am sure more than a few students attend college even though they really don’t want to. After all, to become a plumber, electrician, or mechanic, Mike big disgrace to the family. “No son of mine is going to be a grease monkey!” I will tell you who said that. My own mother.

Yeah, for a long time a career requiring a college education was a significantly better (financially) path for most. It seems like the trades nowadays are paying quite well though, and jobs like HVAC tech, mechanic, plumber, etc won’t be outsourced. Here in AZ, an HVAC tech that works hard for 7-8 months fixing AC units can make as much as an MD makes in a year. It is definitely hard and hot work in the attics in the summer though.

Here is where the mistake was made. The are a lot of jobs which pay way more with a college or an advanced degree. The thing is, those jobs are limited in number. There are only so many positions to fill. Just having a degree doesn’t guarantee you one of those positions. Look at the number of people with law degrees who don’t actually practice law.

Back in 1984 there was a statement made at UNC that the graduating Geography majors that year were making an average of about $55,000. Of course, what they didn’t bring attention to was that Michael Jordan was a Geography major. So yeah, they can make a statement that jobs which require a college degree have a higher wage, but they can’t make a statement that all college graduates will make that wage, since we all know that probably half of the college graduates these days make wages below A LOT of people with high school degrees.

Thank goodness they didn’t squander a dollar on any nasty white folk, like DOKTOR Jill or Hillary or similarly racist, hateful hatey haters.

I used to try to like black people and people, in general. Not anymore. Now, I see adversarial predation, pitiful opportunism and pandering of a very low form.

I had no idea the college has slaves.

don’t give Oberlin any more ideas

Negotiating with terrorists is always a brilliant idea.

Bryn Mawr is not giving away anything it doesn’t want to. It’s part of the left, and destroying the fabric of our society is Job 1 of the left.

For Bryn Mawr and the idiot students, this is win-win.

Bryn Mawr should absolutely pay reparations to any students they had been holding in slavery.

Don’t hire a Bryn Mawr graduate, if you have any brains.

Never, ever hire any grad of this grammar school.

Hopefully this is another liberal college committing suicide.

Another one bites the dust! What equal opportunity employer would look twice at any academic certificate from this discredited mob of cancelled culture fools. Goodbye.

Fine with me if the college gives reparations. IF,IF,the
recipients will now: SHUT UP.

Stupid. When the children throw a tantrum, you close the school and send them home.