Flashback: “We did every possible thing wrong” 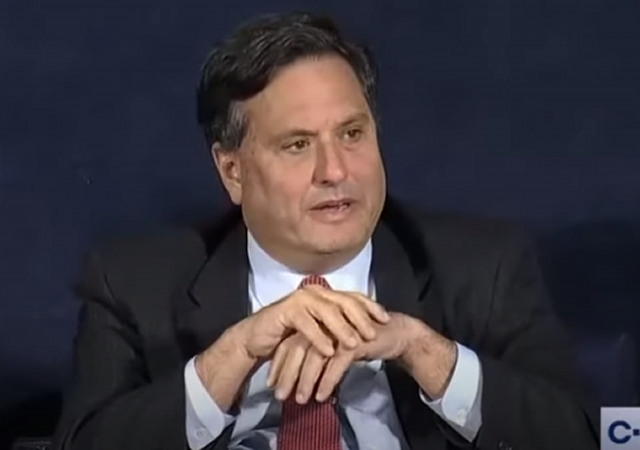 Joe Biden has reportedly chosen Ron Klain to be his chief of staff. Klain is already claiming that the Biden team is inheriting a “huge mess” from the Trump administration on the COVID vaccine.

That’s rich considering the fact that we probably wouldn’t even have a COVID vaccine now without the efforts of the Trump administration.

John Bowden writes at The Hill:

President-elect Biden’s incoming chief of staff, Ron Klain, said Sunday that his boss was inheriting a “huge mess” from the Trump administration when it comes to the U.S. rollout of the COVID-19 vaccine.

“We’re inheriting a huge mess here, Jake, but we have a plan to fix it, the president-elect put out that plan on Friday,” Klain told CNN’s Jake Tapper on “State of the Union.”

Klain said that a $20 billion effort to fight COVID-19 in the U.S. unveiled by the president-elect on Friday would put the U.S. on track to recover from the coronavirus pandemic.

He said the incoming Biden administration planned to take steps to increase both the production and distribution of the two COVID-19 vaccines approved for emergency use in the U.S.

“We think there are things we can do to speed up the delivery of that vaccine, and make that vaccine supply go farther,” Klain said. “For example, one thing the president-elect mentioned yesterday was using the Defense Production Act to ramp up the production of a particular type of syringes that allow us to get six doses of the vaccine out of a vial instead of five.”

Ron Klain had a very inconvenient view of how the Obama administration responded to the H1N1 Swine Flu outbreak in 2009. From FOX News:

President-elect Joe Biden named Ron Klain as his White House chief of staff on Wednesday – and the longtime Biden aide, who worked as an Obama administration Ebola response coordinator, is on record saying the previous administration handled the H1N1 outbreak poorly.

In a Pandemic and Biosecurity Policy Summit hosted in May, 2019, Klain – who was not involved directly in the H1N1 response but was a White House staffer at the time – said “a bunch of really talented” people were working on it, but “did every possible thing wrong.”

“Sixty million Americans got H1N1 in that period of time and it’s just purely a fortuity that this isn’t one of the great mass casualty events in American history,” Klain said. “It had nothing to do with us doing anything right, it just had to do with luck.”

Isn’t it amazing how much narratives can change depending on who is in power?

Since it was 4 years before he knew he was a failure what makes anyone think he would know a mess if he saw one?

when you’re a no trick pony, you fall back on whatever you can. and the #MFM will echo this party line all the way…

Nothing is ever the fault of a Democrat. Just ask Andrea Mitchell or Jake Tapper or the rest of the Propaganda Media.

The clip is pretty short, is there a full clip? I’m not keen on framing a critical piece based on a contextless clip.

I would point out that although plenty of mistakes were made at that time they has at least the excuse of ignorance ie it was the first pandemic of its kind for many many years. It was pretty clear that many of those hard won lessons were lost in the intervening years.

I thought the SAME thing when I saw him say that on CNN.

They’re trying to spin this to make it seem like it was all shit till Biden came in. WE KNOW BETTER.

Trump put the solution in place, fast tracking the vaccine and the rest is enough people either having CCP Wuhan or being vaccinated, that equals herd immunity. The only thing the Biden-Harris Syndicate has to offer is unvarnished propaganda.

More Trump bashing. This is getting old fast. . .

More Trump bashing. This is getting old fast. . .

Well, you’d better get used to it. I have a feeling every fuck up, failure and mess the Biden/Harris regime gets us into for the next four years will somehow all be blamed on Trump and the previous Trump administration.

Yep, just as every problem Obammy had was somehow Boosh’s fault.

The huge mess is idiot governors having no plan at all for getting the vaccine deployed (Inslee, Newsom)

I mean it’s not like they’ve got their entire states locked down due to the virus or anything serious.

The roll out in Washington State has been so abysmal, it really looks like purposeful sabotage on the part of Inslee.

So bad it couldn’t be by accident

When you get as sloppy as that guy, there’s nothing that a donut or Big Mac can’t fix. Give him some fries, too.

So let me get this straight so I’m crystal clear here…..when Operation Warp Speed started, nearly everyone from people in the CDC, Fauci, the media, democrats, governors, The drug companies, etc damn near spit out their drinks laughing when Trump said there would be a vax by Christmas. It was so incredibly laughable that the galaxtic-ally stupid
Trump would say such a thing. I mean, it was fall off your chair, flat earth type of laughing. The “experts” said March at the earliest……and therefore no one bothered to even think about getting the logistics in place for distribution because the idiot Trump had no idea what he was talking about.

Except he did….he was the only one. And now that everyone in charge of distribution in the states has been caught with their pants down, its somehow Trump’s fault that they failed to prepare? Ok. I got it.

Gov Inslee is letting is sit unused for about a month before coming up with a plan.

I do have to give him credit- he is that inept and has been for the past 8 year and won re-election.

So who is the dummy here, Inslee or the voters?

We are seeing the first steps of Blamesplaining, which will soon cover every single aspect of the Biden administration.

First, they howl about how the existing (functional) process is such a tangled mess, badly run, corrupt, and any other lies they can jam out there.

Then they proceed to fire anybody who actually has been doing their jobs in order to provide space for mindless political incompetents, who will then ram the whole process off in wild and random directions.

Lastly as the flames of the burning disaster highlight them from behind, they will all wail “It’s Trump’s Fault” in four-part harmony along with the media.

“We’re trying as hard as we can!” said Jay Inslee on every failure to date. Nigerian scammers are just too smart for the “smart” party.

A repeat of the Obama Administration.

Just like Obama blaming W for all his screw ups!

They claimed in the debate the vaccine wouldn’t be ready at all for months so it seems clear they are lying on account of the fact that the Trump response actually exceeded their expectations of what was possible.

They ran on how they are wonderful people but there are no good adjectives I can think of that accurately describes any major democrat politician up to Biden.