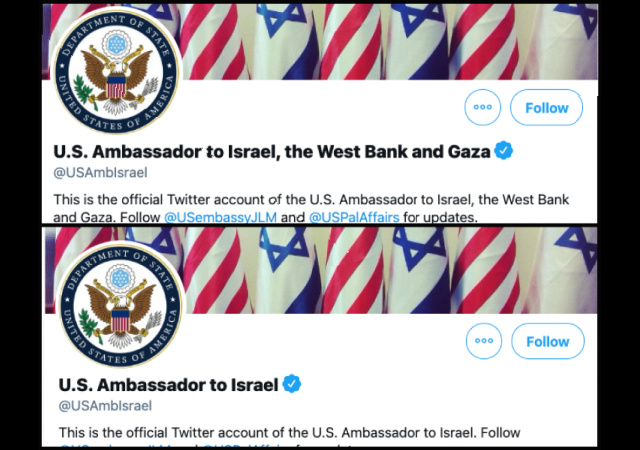 Moments later, the administration removed West Bank and Gaza from the account. 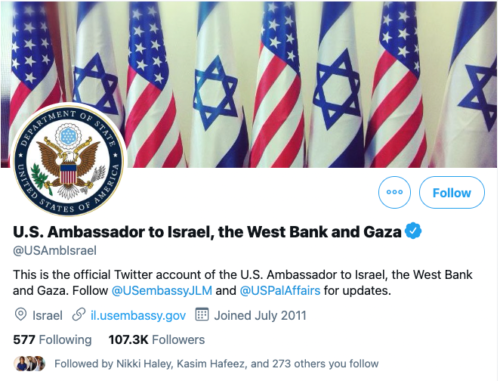 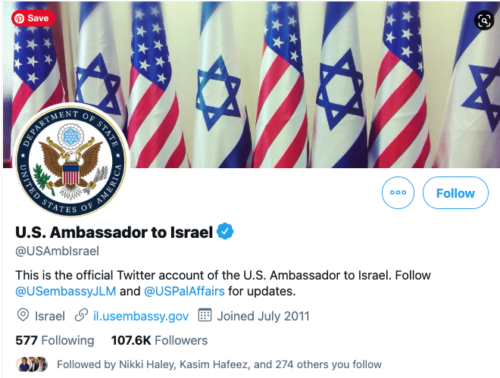 The change in title marks a significant shift in policy toward Israel. The United States has for decades declined to take a policy position on the West Bank and Gaza territories, maintaining the Israelis and the Palestinians must decide in negotiations how the areas will be split up for a future Palestinian state. By including Gaza and the West Bank in the ambassador’s portfolio, the Biden administration appears to be determining that neither area is part of Israel—a move that is certain to rile Israeli leaders. The incoming administration’s move also signals that it will elevate the next ambassador’s role to include conducting direct diplomacy with Palestinian leaders, including in the Gaza Strip, where the Hamas terror group maintains control. This is the only ambassador tasked with conducting diplomacy in a region controlled by a U.S.-designated terror group.

Biden said he will not move the U.S. Embassy out of Jerusalem. Tony Blinken, Biden’s choice for secretary of state, agreed with the move.

Blinken indicated that Biden would try harder to pursue a separate Palestinian state but acknowledged the difficulties.

“The only way to ensure Israel’s future as a Jewish, democratic state and to give the Palestinians a state to which they are entitled is through the so-called two-state solution,” Blinken said.

But he added: “I think realistically it’s hard to see near-term prospects for moving forward on that.”

“What would be important is to make sure that neither party takes steps that make the already difficult process even more challenging,” he said.

Obama never missed a chance to stab Israel in the back. Biden is simply reinstating that tradition, as much as he can without getting too much bad press. The mainstream media are his ardent fans, so they will cover up for him as much as possible.

Who Biden and the Dems really hate are conservatives.

oh, they hate Israel all right, and Jews in general. antisemitism is one of the few acceptable prejudices in the power elite class…

that and blue collar people of all persuasions, except illegal aliens, of course.

If the Biden-Harris administration treats Israel poorly, they should crack down on Arab squatters in the Palestine area. And publicly blame that on Biden-Harris.

It’s a shame Israel hasn’t returned the shiv in the back, in one form or another.

You know that Slo Joe will undo every Middle East agreement and would hate to be in Israeli shoes, this administration will be sucking up to Iran.

I don’t see how crooked Joe and Ho can undo the peace agreements.

The only shocking part about this is that they put it back.

Ooops. Someone jumped the gun.

That move was scheduled for a later date.

Oh, that was a real thing? I thought it was a fake photoshop put out by some prankster, because when I checked it was the same as it had been before.

Two months from now Bibi will be going through another election. Xi Den will do all he can to mess this up for him. He is no friend of Israel.

And, the jihad-promoting, Israel-vilifying dhimmitude of Chairman Joe “Big Guy” Xi-den and the rest of the vile Dhimmi-crats’ rears its head once again, right on schedule.

Ambassador to Israel, the West Bank and Gaza. Does that imply the 3 regions are separate nations or would it need to be “the West Bank, and Gaza” to split the largely self governing MuslimArab territories?

Enjoy the clown show, everyone. The circus will be in town for the next 4 years. God help us all.

The clown show will be a target-rich environment for tomatoes.

A world-class tomato-thrower has retired, with little to do. Right now, PDJT is probably warming up his pitching arm.

Great point, FineR. Myself, I can hardly wait for the show to begin, tho it may take 6 months. The tomato thrower really knows how to make it sting.

They seem to be out of that business, witness all the obama scumbags who tried to destroy them, who are still alive and kicking.

However, Ho Harris is the best life insurance out there.

Mossad has never been in that business. It kills terrorists, not politicians.

Criminal intent plus criminal act equals a consummated crime. If there is direct determinative evidence of election fraud showing PDJT won (there is), jb is an illegitimate president and we have an illegitimate government. If it is proven (it will be) that jb and many others worked with hostile foreign governments to install himself illegitimately, he and the rest of his “administration” will be removed. By who? Some of the last remaining people who take their sworn Oaths to protect and defend our Constitution (against ALL enemies, foreign AND DOMESTIC) seriously. The last remaining people who actually suffer real consequences for violating/ignoring their Oaths to protect and defend the Constitution. It will all be done legally and Constitutionally. I used to think renegade would get a special deal to maintain the peace in our country. Now I believe once everything comes out, they will all suffer the maximum penalties for their actions.

It will all be done legally and Constitutionally.

What you are describing is neither legal nor constitutional, no matter what evidence emerges.