AOC and The Squad Sell Out, Help Reelect Pelosi Speaker

AOC and The Squad Sell Out, Help Reelect Pelosi Speaker 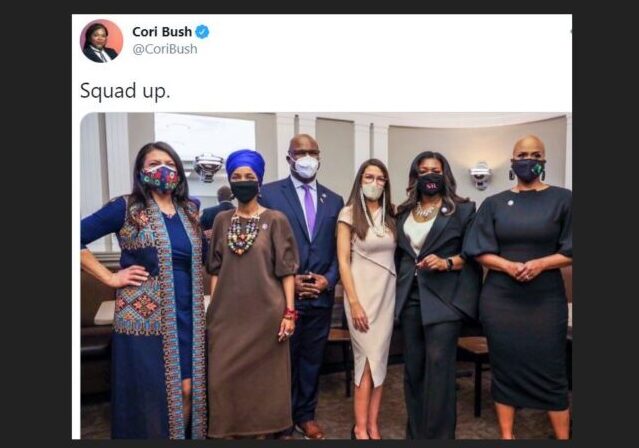 The new Congress convened Sunday at noon, and the House held its Speakership vote.

With only a razor-thin majority, Democrats could not afford to indulge 15 members voting against Nancy Pelosi as happened two years ago, nor did AOC or the rest of the ‘Squad’ defect despite pressure from the left not to “sell out.”

Just before the floor vote to reelect Pelosi Speaker:

Newly elected N.Y. Democratic Rep. Jamaal Bowman — who had declined to say whether he would vote for pelosi — voted for Pelosi.

There was a little drama as first Cori Bush and then AOC appeared to abstain.

The Squad made damn sure they had enough votes for Pelosi https://t.co/JCso8pgGy9

My guess is they had Brunch today to see who could not vote but still assure Pelosi the job and giving the squad cover.

Only to come back later, fall in line, and sell out to the Pelosi establishment.

Cori Bush, who originally withheld her vote, just voted for Pelosi as Speaker. The members who did not respond when their name was called can vote until the voting is closed. So the ones who didn't respond at first can then vote for Pelosi if their votes are needed.

In the second round of things, AOC votes for Pelosi.

The Bernie left kept the pressure on right up to the vote.

The socialist left is not happy with the ‘Pelosi Squad.’

You just voted for Nancy "green dream, or whatever" Pelosi.

We all all fucked people. The progressive co-chair @RepJayapal voted for Pelosi. Its time for a #PeoplesParty.

Because Pelosi couldn’t afford to lose any votes, she urged at least one member who tested positive and is still in quarantine to drag herself to the House to vote.

Pelosi allowing Dems who JUST tested positive for COVID days ago in to vote (because her Speakership is on the line) is a great reminder that Dems see the virus and virus safety measures as a political tool to weaponize or ignore based on their political needs of the moment. https://t.co/ByYkBz7Atk

.@SpeakerPelosi changed the COVID rules because she is desperate to cling to the gavel.

No one can attack me about masks, when Pelosi is sending Democrats to the floor with positive COVID tests to vote for her for Speaker.#COVID19 #117thCongress https://t.co/BdFwfajMIl

Pelosi really needs every vote she can get if she wants to be elected Speaker, and if it means spreading around some COVID, so be it. https://t.co/JiqbfrAzc6

Jared Golden of Maine has voted for Tammy Duckworth for speaker. Duckworth is in the Senate.

Rep. Conor Lamb D-PA just voted for fellow Rep. Hakeem Jeffries D-NY instead of Pelosi. Lamb also did not vote for Pelosi in 2019. 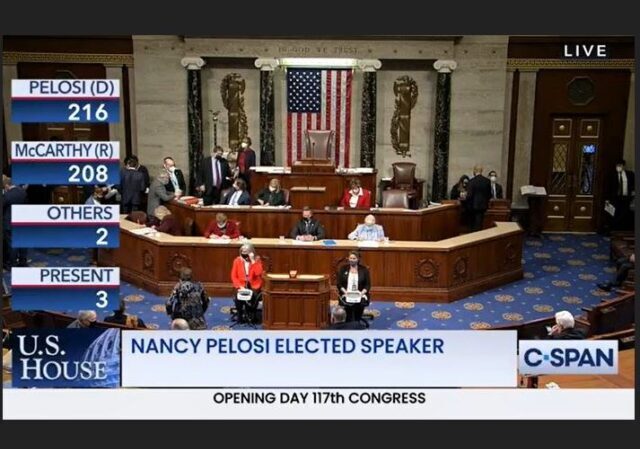 I hate these people with every fiber of my being. Congressional salary should be a dollar a year.

I wouldn’t go that far, but they shouldn’t get paid any more than the mean gross income of American citizens. They get enough perks as it as Representatives.

Perks? Is that what you call kickbacks, bribes and other forms of payolla? Tony Soprano and company called it a taste. Congress gets a taste of anything they do. SMH

If they were not paid at all, each member of congress will still be millionaires when they leave. The Congressional salary is small potatoes compared to how much they make from K Street.

The tax-free perks are incredible too. Us common folk use post-tax money to pay taxes on our food, our health care, our haircuts, our gym membership, our transportation, our child care, our security (most of us can’t afford it, so we opt for the 2nd amendment instead).

These aristocrats get ALL OF THAT free, not a dollar of salary used for either the cost or the taxes paid on that cost with post-tax salary…it’s truly sickening, even without the insider trading and other money grabs they can access.

notamemberofanyorganizedpolicital in reply to healthguyfsu. | January 3, 2021 at 10:01 pm

And they still sell themselves
and not for the first time either.

The Democrats prove themselves to be just like the Republicans: they say one thing and talk a good story, then they do something else. The squad is no different.

In fairness, is there any real difference between Pelosi and the Squad? Both sides are devout Communists advocating censorship, mass arrests, genocide and government control of the economy.

All of the wishcasting Never Trump morons pontificating about ‘Ha we can totally get a Republican speaker!’ are proven idiots yet again.

I seriously grow tired of explaining this to idiots who talk about ‘moderates’ in the Democrat party.

They vote against The Party ONLY WHEN GIVEN PERMISSION TO DO SO.

When their votes are required they do what they’re told.

There was no drama and there was no doubt. Unlike Republicans, the Democrats always…ALWAYS… have sufficient party discipline to get the job done.

notamemberofanyorganizedpolicital in reply to Blaise MacLean. | January 3, 2021 at 10:04 pm

TO GET THE CRIME DONE.

NY is losing one congressional seat after the census results are recorded. The AOC is very afraid that it is her seat that will be eliminated. THAT is what is going on here. Might also be true in Illinois and Michigan. Pelosi is nutty enough for the Democrats. Pandering to the Bernies is what cost them big in last year’s elections. The one-size-fits-all campaign strategy for every House member proved to be toxic.

Liberals are all about power., They can mouth oof all day but in the end, power is all they care about.

Forget ideological baloney: the 6 jackasses in title photo could not get jobs anywhere but the post office or working in a bar. Now they’re getting rich embezzling OUR money.

Can you just imagine the evil and stench that was in that room? It’s wonder the paint stayed o the walls.

Indeed, they truly do represent their constituencies. Reverend Wright must be so proud.

Don’t let them fool you, their revolution has gone this far it’s not going to stop because of them.

No surprise, and nothing to condemn. The parties in the US congress are unusual among world legislatures in giving their members freedom to vote as they like on almost every issue, but at the bare minimum, if a party label is to mean anything at all, you must support your party on organizing votes.

That even there they tolerate a small amount of dissent, so long as it doesn’t change the result, is itself surprising. One would expect that no matter how big your party’s majority, if you vote against the party on an organizing vote you’re out. But here even that is tolerated, when those votes aren’t needed. But when the organizing vote is this close the party must impose discipline or the party label would be completely meaningless.

Oh c’mon…they aren’t kicking out the squad and its useful band of idiot identity politics voting blocs. That would be devastating to their party at the polls. This is about being pretenders, and they won’t get called out enough for it.

If the squad had voted against Pelosi and caused her to lose the speakership they would absolutely have been kicked out of the party. There would be no point in keeping them in the party after such a vote.

You are high. No scenario in which the party of identity politics can afford to kick out progressively minded socialists that check all those boxes and still win a national vote in the next 10 years.

If they don’t support the party’s nominees on organizing votes then they’ve resigned from the party. The party gains nothing from keeping them around.

Was thinking you get the Wuhan flu and your staying in quarantine 2 weeks, unless your job is electing Nanzi then then Covid Schmovid you get to work.

I don’t know why anybody is upset about this. Pelosi is universally hated and makes the perfect face of the democrat party.

I don’t think there’s any way I could be less surprised.

Well done by Reps. Under pressure because of solid R support for Kevin McCarthy, supposed idealistic Dems prove themselves to be machine politicians like any others.

Will this make Berniebots reconsider their beliefs? Frankly I don’t care, they hate me anyway.

They sold out? I didn’t even know they were Republicans.

And the self-described “reverend” Emanuel Cleaver ended his prayer with “Amen and Awomen”. What a niggard.

You could get suspended from every leftist board in the country for that.

Who brought their eunuch? Dang, these wenches have some low standards–except for Ilhan, wife to her brother and harlot of faith tradition.

Just think if we can’t select a President or VP this time around – Pelosi could be President.

Gee, the Squad morphed from fire-breathing progs to compliant party hacks so quickly I didn’t even notice.

All mouth, no spines. Now for the “squid squad,” to kneel in obeisance. They have openly admitted pay over constituents. I hope their supporters and those people in the squid squads districts that didn’t vote, suffer greatly and profoundly. They deserve it for voting wrong or not voting at all

Wonder what the carrots and sticks were. I have no doubt that both were offered.

Why nobody will provide an actual number is beyond me.