“The comments that were brought to our attention do not align with the North Penn School District’s core values. The views expressed are in direct conflict with our work to develop a community that values diversity.” 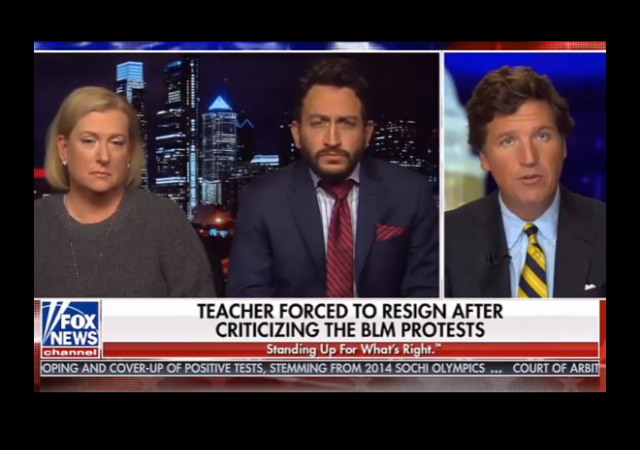 A special education teacher from Pennsylvania named Ashley Bennett says she was forced to resign after merely sharing a comment that was critical of the Black Lives Matter protests over the summer.

Bennett’s story is just getting some notice now and she appeared on the Tucker Carlson show with her lawyer last night.

Dave Huber of The College Fix has details:

It appears school district officials Montgomery County, Pennsylvania, have a bit of a problem with public school educators who share conservative views on their personal social media accounts.

The College Fix recently noted the story of Principal Amy Sacks of the Perkiomen Valley School District who was fired for posting conservative memes on her Facebook account. Sacks is suing for First and Fourteenth Amendment violations, as well as for political retaliation.

Now, just a few miles away in the neighboring North Penn School District, a longtime educator there is suing that district for similar reasons.

According to The Reporter, Ashley Bennett, a special education supervisor with 27 years of service, was forced to resign in July due to a Facebook post criticizing Black Lives Matter and various race protests and riots.

“I see signs all over saying #BlackLivesMatter. I’m just trying to figure out WHICH black lives matter. It can’t be the unborn black babies – they are destroyed without a second thought. It’s not black cops – they don’t seem to matter at all. It’s not my black #Conservative friends. They are told to shut the **** up if they know what’s best for them by their black counterparts. It’s not black business owners. Their property, their business and their employees don’t mean anything. So which black lives matter again?”

The next day, the school district released this statement:

“The comments that were brought to our attention do not align with the North Penn School District’s core values. The views expressed are in direct conflict with our work to develop a community that values diversity. We strive to acknowledge, respect, understand, and celebrate the dynamics of racial and cultural differences. Through the development of a culturally proficient staff, the establishment of structures that promote equitable opportunities, and partnerships with families and students, our school district seeks to create an environment of respect where all members of the school community are empowered to learn, grow, and appreciate one another.”

Bennett was placed on leave pending an investigation. Then the school district added this to their statement:

“A school district should be a reflection of its community, and the overwhelming support at numerous events for Black Lives Matter across the diverse and vibrant North Penn community aligns with our district’s goals to make genuine, sustainable change. The school district stands 100% behind the values and character demonstrated during this past weekend’s community-wide, peaceful and unifying Solidarity March organized by North Penn students and graduates.”

By the end of July, Bennett claimed she had been forced to resign, and was seeking legal action.

Earlier this month, Ashley Bennett — a special education supervisor with North Penn School District —resigned from her position while being investigated for a post that she shared on her personal Facebook page expressing criticism of the Black Lives Matter movement.

Now, Bennett has hired legal representation to take action against the district, stating that her civil rights were violated and her resignation was forced by district officials.

“Ashley Bennett — a 27-year veteran special education supervisor with an unblemished record — intends to pursue legal action against North Penn and its officials,” said Francis Malofiy, Esquire, of Francis Alexander LLC. “Ashley was suspended without cause and then threatened with termination and career and personal ruination if she did not immediately resign.”

Here’s the clip from the Tucker Carlson show featuring Bennett and her lawyer. It’s cued to start at the 24:47 mark, just press play:

This is reminiscent of a case in Vermont from last June, where a school principal was placed on leave for criticizing the Black Lives Matter movement.

Are we witnessing a form of hysteria?

Why is criticism of the Black Lives Matter movement such an unforgivable offense? When did this happen?

Elimination of the nuclear family and removing fathers from the home. Those are some of the values of their BLM Democrat community.

It would take media years of apologies, even then their conduct has been so egregious, it is unforgivable.

Take a close look at at black families have worked out regarding child rearing. Children do much better in life when they have both male and female role models and stability of a nuclear family.

I haven’t looked at the numbers but I suspect that 2020 will go down as the highest ever year of blacks killing other blacks even when populations increases are factored in. Maybe they should ship a few of those BLM signs to the ghetto where they might do some actual good with the people who really need to hear the message. Lord knows every house in my neighborhood, where exactly 1 black family lives (and he is culturally whiter than me) has at least 3 or 4 in their desperate attempts to out-woke each other. My new favorite is the multicolored fist in a circle against the rainbow background. Has every color known to man, except, drum roll, white.

“Why is criticism of the Black Lives Matter movement such an unforgivable offense? When did this happen?”

In 2020. BTW, you are not essential. Conform or be cancelled.

“Why is criticism of the Black Lives Matter movement such an unforgivable offense? When did this happen?”

Criticism of BLM, its goals and techniques is an unforgivable offense because it is all true. BLM is just the latest racial grievance blackmail scam. And, it is so transparent that it is impossible for its supporters to defend it against criticism. So, the “pay no attention to the man behind the curtain” defense has to be used and the teller of truth banished form liberal society.

Now, the question of why do supposedly intelligent, educated liberals blindly support and defended BLM is easily answered. They are all insane. They are nuts, crackers, loony tunes, or whatever phrase you prefer. They are simply delusional. Once people understand that, when they are dealing with a modern liberal, they are dealing with the mentally ill, life becomes much simpler.

“ Now, the question of why do supposedly intelligent, educated liberals blindly support and defended BLM is easily answered. They are all insane.”

I disagree. They are not blind, nor are they misguided or delusional. They are not insane. They are evil. They seek to enslave or slaughter anyone who does think, look and act exactly like them.

The genocidal maniacs pushing BLM are not a new force in history. They could be found running the Nazi concentration camps and Soviet gulags, butchering millions in the killing fields of Kampuchea and Rwanda, and running the torture chambers of apartheid South Africa and revolutionary Iran. Convinced of their own absolute moral and intellectual superiority, and fueled by a demonic greed for power, they addicted to killing. The more death and suffering they cause, the more virtuous they feel.

And now they control America.

I’m sure her union will get this straightened out.

My son said it best: it’s easier and cheaper to deal with one lawsuit over firing a white guy than with a half dozen affirmative action complaints.

The “statement” issued by North Penn is is linguistic dysentery that reeks of rigid indoctrination and and subpar intellectual development.

The buzz words are as vomit to the dogs who consume it.

Every single “professional” thing I read or attend sounds like that.

This is what happens when people of sub par capabilities are allowed to pose as being equal when they are not.

Contrary thought has no place on someone’s personal page, unless you are a “woke-joke” liberal. Dead fish go downstream 😉 I hope she retains Avenatti and goes for the jugular 🙂

Avenatti is no longer available for the practice of law. Bless his little heart.

I wonder if Avanti has met bubba or big Willie yet?

The left hates all freedoms – not just of speech.

I’m just a few files from North Penn high school.
It should be pointed out that North Penn has probably the largest high school in all of Pennsylvania at one physical site (they were supposed to build other high school on the other end of the district but opted instead to enlarge their already gargantuan facility).

These are very close to me. The amount of BLM signs in front of houses in se Pa might shock some of you.
(waves hi to Neo)

They are all about Diversity until it comes to thoughts and opinions.

Their conception is diversity of color, not individuals. Diversity denies individual dignity, denies individual conscience, denies intrinsic value, normalizes color quotas, color blocs, and affirmative discrimination. It is a dogmatic belief, not limited to racism, under the Pro-Choice, selective, opportunistic, relativistic quasi-religion (“ethics”) of the Progressive Church/Synagogue/Mosque/Temple/Clinic/Chamber realized under a liberal ideology.

They are also all for diversity until it moves next door.

It’s worth noting that journalists need to fact check everything.

In Seattle this week one of the local reporters who is usually pretty good got sucked into posting a story about a person who said that a relative had died of a heart attack but it had been labeled a COVID death and the life insurance wouldn’t pay out because of “pandemic exclusion” … about a half dozen insurance agents chimed into the comments to note that there is no such thing. Being a licensed agent, I too called bullshit until they sourced the actual language in the contract…

Some, Select Black Lives Matter’s incursions into neighborhoods a la Democrat-affiliated KKK to intimidate people and force them to kneel, is an incorporated sect of the Progressive Church/etc. and diversity (not limited to racism) racket where collusion between public and private parties has realized a fascist regime.

Another victim of social media. Stop using it, anything you say can and will be used against you.

So who exactly decided what the district’s ‘core values’ are and that they align with those of self-avowed Marxists? Were those ‘core values’ agreed to by the citizens who not only pay the taxes to support the school but also entrust their children’s education to the district? These are the same types of non-elected activists who infest post-secondary education and forget or ignore that they are there to educate and not to indoctrinate.

The Left confuses the thought that black (and every other skin color) lives matter, with the leftist, harassing, terrorist, corrupt organization called
“Black Lives Matter.” Not even remotely the same thing. So if someone disagrees with that horrible group, people on the left think that person hates black peopke. Ironically, that person maybe the more constructive thinker.

I wish Trump would name BLM a terrorist organization, just like ANTIFA.

I bet her case will be dismissed on the grounds that she resigned “voluntarily”.