“He can dine at Gracie Mansion if he wants hospitality in Manhattan. He ain’t getting it here!” 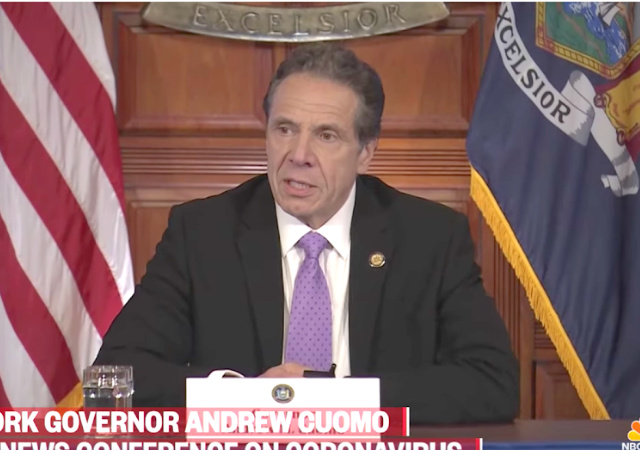 It probably goes without saying at this point that Democrat governors have overreached in their response to the Wuhan coronavirus.  Democrat leaders’ draconian, illogical, unsupportable, contradictory, and just plain stupid lockdown decisions are coming home to roost.

Not only is California governor Gavin “Rules for thee, but not for me” Newsom facing an increasingly viable recall effort—one Kamala’s former ‘mentor,’ Willie Brown, warns him about, but New York governor Andrew “Killer” Cuomo’s ridiculous lockdown orders have angered New York City’s restaurateurs to the point that they are organizing to ban him from all NYC establishments for life.

This made me laugh. NYC Restaurants to Ban ⁦@NYGovCuomo⁩ from Dining https://t.co/OCRtqtciYv

According to bar owner Larry Baird “ He can eat at some shitty roadside diner outside of Albany but he will not be served anywhere in New York City, known universally as the world’s greatest dining destination! If he has to use the restroom he can go pee on my street-corner! That’s what he wants anyway!”

Former life long Coney Island resident Val Torre said that he’s finally moving to Florida. “It’s 70 degrees every day. My Coney Island childhood friends have all retired to Florida now! All the restaurants and bars are open and the grannies live!”

Many members of the Facebook Group NYC Restaurants Open applaud the Executive Order banning Cuomo from being served at all New York City establishments. One member stated “Completely schizophrenic behavior! How are they coming up with these rules is beyond any logical reasoning”

Another furious lifelong New York resident exclaimed “ He can dine at Gracie Mansion if he wants hospitality in Manhattan. He ain’t getting it here!”

If you’re wondering why a restaurateur would suggest the governor “pee on my street-corner,” this is a response to one of the most bizarre edicts thus far. Cuomo decreed that while socially-distanced dining outdoors in the snow is currently permissible, patrons using the establishment’s restrooms is not.

In addition, when people speak about him they should call him ‘Comrade Governor’ or ‘Fuhrer Cuomo’

notamemberofanyorganizedpolicital in reply to p1cunnin. | December 20, 2020 at 3:22 pm

Wait till this brick mansion falls on his head.

“Executive Order 13848 is not properly understood. TRUMP’s ability to freeze all assets of any person or entity found to have directly or indirectly engaged in, sponsored, concealed, or otherwise been complicit in foreign interference in a United States election remains effective until January 30, 2021. Yes, after Inauguration Day !!!

The sanctions are considerable and any one found to have perpetrated any infringement will be subject to the usual proceedings in such circumstances. That includes Governors, Secretaries of State, Attorneys General, Election Officers and anyone else involved in the commissioning of such acts

Unfortunately I suspect that all the establishments that sign up for this are places Cuomo would never go anyway. The kind of places he deigns to patronize will probably still welcome him and kiss his nether regions, because their customers think he walks on water.

They may be doing him a favor. As angered as many are at him, he just might have ended up with some extra “ingredients” in his food.

Made my day though.

I bet this is toasting his ego. These business should go further, and circulate a ban poster with pictures of his staff.

Print Wanted posters: Wanted – A Governor to get us out of this mess!

Every establishment singling on will see costs from health, building & safety, the fire department…

At work last night I had a death investigation report of a 50-year-old medical doctor who committed suicide.

I mentioned the increase in suicide reports I’m seeing to an officer, and he told me he had just talked to the coroner. He said the coroner told him they’re getting on average between 50-60 suicides.

I quickly thought that’s 7 or 8 suicides a day.

Then the officer said, “At first I thought he meant per week … but he said they’re getting 50 to 60 suicides per day!!”

That’s just in L.A. 50 – 60 suicides per day. These lockdowns are killing people.

Suicides, etc are just the cost of business to “fundamentally transform” America. Stalin and Mao transformed Russia and China with their killing fields. So did Pol Pot. What’s new? Add to that, Nobody wants to talk about who gave us this disaster because that would be racist. The Left thinks they are winning yet forget who their ultimate masters would be.

Luke, losing your business and your house and car when you’re 55 and don’t have life time to recover is also being murdered, I believe. They’ve killed your spirit, your hope, your future, your life force. Maybe your children’s, too, depending on their ages and what there futures were.

The people who have so blithely done this should be tarred and feathered if not drawn and quartered.

If someone did that to me, I would want to kill them. I don’t believe I’d actually do it, but I sure would want to.

I’m too much of an A-Hole to suicide. I downloaded Recall Gavin Newsom petitions and am gathering signatures instead

Just a bunch of honkies, probably. So, no one cares.

This is so incredibly sad. So many lives have been destroyed, all in the guise of “staying safe.”

It is. In addition, given the pattern of “distancing” has gone on all this while with no end in sight, I wonder about how persons will trust beeing around one another once again.

Moreover, there is the issue of how early childhood development has been impacted and what does it suggest for their social development and maturing.

notamemberofanyorganizedpolicital in reply to BEdwards. | December 20, 2020 at 6:50 pm

All for the purpose of STEALING Elections.

Whatever happened to “First, do no harm”?
Oh, yeah. That’s for doctors, not politicians.

The problem is the wrong people are killing themselves.

They can just serve him up a shit sandwich

the little prince is vindictive enough to put their liquor and or license to operate a restaurant.

So? Let him. They keep operating.

Meanwhile, each of us should be thinking “hunting over bait”. Stake them out and remove his minions until the rest refuse to show up.

If they really want to make it hurt, extend the embargo to every elected official in NY.

Hopefully Pennsylvanians will treat Emperor Wolf the same way.
And his sidekick Dr Xhe as well.

If only Cardinal Dolan would exhibit the same moral clarity and exclude Cuomo from entering Catholic Churches and/or receiving any sacraments.

Should be statewide, with recall petitions all over.

I don’t know, but that is funny. Cuomo gets what he deserves.

I am torn. That autocratic bastard deserves it. But so do the idiots who voted for him.

They should be doing the opposite: invite him in, then poison his ass.

Where’s Cut-Me-Own-Throat Dibbler when you really need him?

I nominate NYC bar owner Larry Baird for Senator! A real no- nonsense, straight-talking businessman in place of the grifters and crooks and tin/pot totalitarian wanna-bees infesting our political class. Larry, you got my vote!

What a great pro-active reaction! Now, they need to add the Democrat members as well as the known BLM & ANTIFA membership to a “SHIT-LIST” of black listed left wingers! (Pardon the pun.) Why supply the “Enemies of the State” with goods and services?

So you know where they show up.