Statue of Robert E. Lee Removed from US Capitol

Statue of Robert E. Lee Removed from US Capitol 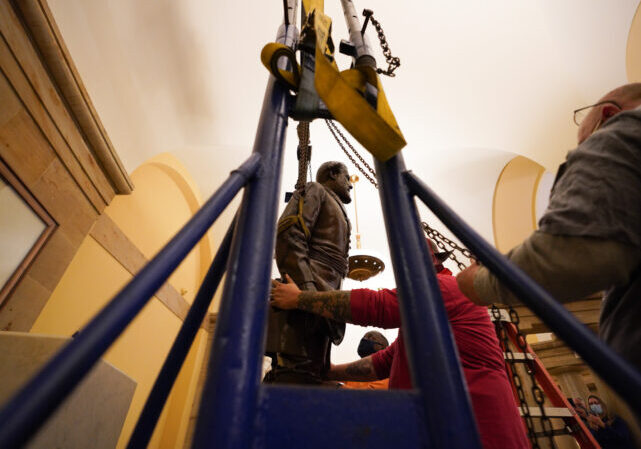 From the official statement:

Governor Ralph Northam today announced that Virginia’s statue of Confederate general Robert E. Lee was removed from the United States Capitol overnight. A representative from the governor’s office was present for the removal along with United States Senator Tim Kaine and Congresswoman Jennifer Wexton.

Each state is entitled to display two statues in the National Statuary Hall Collection, and for 111 years, the Confederate statue has stood along with America’s first president George Washington as Virginia’s contributions. The two statues were added in 1909, which was 44 years after the Confederacy rebelled against the United States and was defeated. The Lee statue had been one among 13 located in the Crypt of the Capitol, representing the 13 original colonies.

“We should all be proud of this important step forward for our Commonwealth and our country,” said Governor Northam. “The Confederacy is a symbol of Virginia’s racist and divisive history, and it is past time we tell our story with images of perseverance, diversity, and inclusion. I look forward to seeing a trailblazing young woman of color represent Virginia in the U.S. Capitol, where visitors will learn about Barbara Johns’ contributions to America and be empowered to create positive change in their communities just like she did.”

Earlier this year, Governor Northam signed legislation establishing the Commission for Historical Statues in the United States Capitol charged with studying the removal and replacement of the Robert E. Lee statue. The eight-member commission, chaired by State Senator Louise Lucas, voted unanimously on July 24, 2020 to recommend removal of the statue. At the request of the Commission, the Virginia Museum of History and Culture in Richmond, Virginia will accept ownership of the statue.

“Confederate images do not represent who we are in Virginia, that’s why we voted unanimously to remove this statue,” said Senator Louise Lucas. “I am thrilled that this day has finally arrived, and I thank Governor Northam and the Commission for their transformative work.”

On December 16, 2020, the Commission selected civil rights icon Barbara Rose Johns to replace the Robert E. Lee statue, after receiving public input from Virginia residents during several virtual public hearings. In 1951, sixteen-year-old Barbara Johns led a student walkout at Robert Russa Moton High School in Farmville, protesting the overcrowded and inferior conditions of the all-Black school compared to those of White students at nearby Farmville High School. This garnered the support of NAACP lawyers Spottswood Robinson and Oliver Hill who took up her cause and filed a lawsuit that would later become one of five cases reviewed by the United States Supreme Court in Brown v. Board of Education of Topeka when it declared segregation unconstitutional in 1954. Historians consider Johns’ protest a pivotal moment that launched the desegregation movement in America.

We can pretend our history doesn’t exist and label it offensive, but that won’t change the past nor help us in the present.

“There never was a Robert E. Lee and he never lead the Army of Northern Virginia against Eurasia because we’ve always been at peace with Eurasia”

notamemberofanyorganizedpolicital in reply to fscarn. | December 21, 2020 at 10:21 pm

More lead for bullets for the police.

Well I wonder what this history is going to look like when they finish? I bet it is a grey 1984.

Normally I’m against the current attacks on history – but I think this particular move is appropriate. (Unlike some of the recent ridiculous ones like removing a “racist” Lincoln statue. Displaying Lee in the Capitol building is just a step removed from displaying Jefferson Davis there.

I am glad the statue is just getting a more appropriate venue rather than put in storage or trashed. Lee was a remarkable Virginian but not sure he belongs in the building housing the govt he fought against.

Robert E. Lee was a great American. He deserves his own building, but this spot was tolerably prominent enough.

Did Va. invade the Capitol and put it there? No, Congress, during the Civil War, created National Statutory Hall to represent citizens from every state. The House and Senate voted to accept every submission, including Lee and Jefferson Davis. But for more than 100 years, Lee was there and no one said a word. Was its presence just as bad in 1963? Or 1983? Or 2003? Times change, I get that. And if a state wants to withdraw its contribution, so be it. States were given the choice in the first place, Congress did not pick the statues ahead of time. But Congress did approve of them, and in the case of the Lee statue, that approval was fixed for more than a century.

Consider this: Lee and Jefferson Davis could have been hung for treason. The very people who fought these men decided not to do that. I don’t think the significance of this is understood today. We have, right now, governments and citizens more hostile to men who lived and died in a century twice removed from this one, than their contemporary, wartime enemies were.

Today, the people who claim to be the most reasonable, the most compassionate, the most nuanced in thinking are in reality the harshest, emotional, most unreasonable twits America has ever produced. Get it out of my face. Shut up. You don’t exist to me. This POV is dangerous when left unchecked. No one is checking it.

Statue removal, in and of itself, is not significant. The reasons (or lack thereof) behind it are.

Huh? What has Jefferson Davis got to do with this? His statue has never been there.

Nihilism for power’s sake. To gain power, destroy it all, then rule over the shambles.

What kind of person wants to rule over wreckage?

Hero of the Mexican War and whose presidency of Washington and Lee University gave it it’s name.

hundreds of years after northam is forgotten, lee will be remembered for the southern man he was–a man of honor, of conviction, of determination–what lee(and a few others)did to bring about the end of the conflict was infinitely more difficult, more personally excruciating than anything lincoln ever did in returning peace to our country

lincoln, in allowing the sham and shame of “reconstruction” to proceed, sealed his own fate–said another way, lee being the quality of man he was, survived the conflict–lincoln did not

The war of Northam aggression.

Meh. At least they removed it as a result of official action, rather than a mob of black-clothed idiots ripping it down with ropes. And now it will be housed in a museum, where more people will be able to see it.

The democrats are fighting the ghost of General Lee. Francis Marion ‘The Grey Ghost’ is coming for them to avenge Robert E. Duck and Cover democrats. There is no escape.

I can’t believe how racist they are, leaving the statue of George Washington (/ in case anyone doesn’t get it)

Perhaps VA could replace it with a statue of Dr. Kevorkian or Kermit Gosnell.