“Mr. Northam, a Democrat, persuaded many Virginians to allow him a season of penitence.” 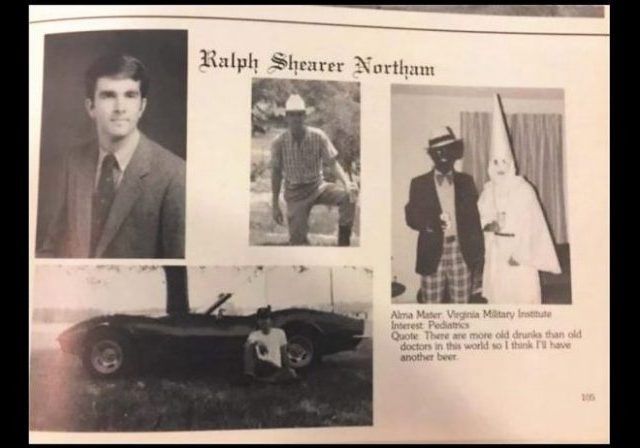 Way back at the beginning of this year, Virginia’s Democrat Governor Ralph Northam became embroiled in controversy when it was revealed he was pictured in his college yearbook wearing blackface, or a KKK robe, depending on who you ask.

Northam faced calls to resign from every corner of the political theater.

Among those calling for Northam’s resignation at the time was the editorial board of the Washington Post:

The Washington Post Editorial Board writes that Northam “can no longer effectively serve the people of Virginia who elected him.”https://t.co/5U0iqvergX

They have apparently had a change of heart. Opinion writer Karen Tumulty shared a new editorial from the paper this weekend on Twitter:

Back when a racist photo first surfaced in his medical school yearbook, most Va lawmakers, our editorial page (and yours truly) said ⁦@GovernorVA⁩ should resign. We were wrong. https://t.co/bA25YpnWbk

Could this be motivated by the fact that Democrats now control Virginia and it is politically expedient for the left to occupy the office of governor?

This is the same editorial board, writing two days ago:

How Ralph Northam came back from the political dead

THE HISTORY of U.S. politics is full of second chances — of scandal-scarred, disgraced and irredeemable public figures staging improbable comebacks — but few back-from-the-dead narratives have been as swift and sure-footed as the one Virginia Gov. Ralph Northam has managed this year.

Since Feb. 1, when the discovery of a racist photo on his medical school yearbook page dealt what seemed a lethal blow to his political career, Mr. Northam has refocused his governorship on racial equity and reconciliation in what amounted to an extended act of public contrition and atonement. It has been astonishingly effective not just in terms of his own political rehabilitation — his poll numbers climbed from the depths — but also in setting a clear theme for his four-year term in office, delimited by Virginia’s prohibition on governors succeeding themselves.

In the process, Mr. Northam, a Democrat, persuaded many Virginians to allow him a season of penitence. Not least among them are African Americans who were stunned when the governor first admitted, then denied, appearing in the photo in which one figure is in blackface and another is in a Ku Klux Klan costume, while adding that he did don blackface, appearing as Michael Jackson at a dance contest, the same year the yearbook was published.

Can you even imagine such a thing being written about Trump, or any Republican for that matter in this same situation? This must be more of that liberal media bias we’re constantly told doesn’t really exist.

Redemption can only be found in faithful devotion to the Democratic Party agenda. They make no distinction between virtue and partisanship. https://t.co/LvBlhPysim

The mask has been ripped off the media. There is no coming back from this.

WAPO COMPO is saying if you are for confiscating guns, you can go blackface, chewing fried chicken and spitting out watermelon seeds. It’s all good.

“Political power grows out of the barrel of a gun,” says the left in the person of Mao. But only if lefties are the ones with the guns.

notamemberofanyorganizedpolicital in reply to fscarn. | December 29, 2019 at 3:39 pm

Wait, are we sure he isn’t the guy in the Klan hood?

Democracy Dies at the Washington Compost

Because he’s a Democrat. LOL!!! Transparent much?

Liberal playbook: the rules apply to thee they don’t apply to me.

I guess the quickest way to forgiveness for racism is to pull out all the stops for gun confiscation, especially if the threat of mass arrests is implied. Just prove you’re a totalitarian, and you’ll be forgiven, even if you misspent your youth burning crosses on illegal immigrants’ lawns.

As stupid as the blackface incident was, the lieutenant governor was accused of two sex crimes against women and he is still sitting and thinking of running as governor next time! He is using bill clinton’s play book.

This is all just the double justice system that the libs love to have in place. The Governor of Virginia should not have to resign over appearing in blackface 30 years ago. No one should. So, this, while hypocritical, is the correct position to take. However, what has totally dropped off the public radar is the rape allegations against the Lt. Gov, Justin Fairfax.

I guess this is similar to being charged with sexual battery or attempted rape 30 plus years prior to being nominated for Supreme Court justice without any proof and being instantly, then , in perpetuity, held as guilty by the entire Left.
No year of penitence for Brett Kavanaugh.

Democratic politics, the Washington Post opinion board and especially Karen Tumulty can kiss our collective a$$es!

Let’s not forget what else this despicable dem is planning:
https://www.wnd.com/2019/12/behind-effort-embed-abortion-state-constitution/

Also think one of lord Fairfax accusers claimed Cory Magette also attacked her while at doookie. When asked about it saint coach k didn’t know anything. Which kinda strange since magette first dookie to go to nba early – a Saint k no no back then.

So just another tidbit to story that wapo and msm have let die in darkness.

This is how the Dems lose the black vote. The black community is more sensitive to blatant hypocrisy than any other group.

So how do you get the black vote? Just ask President Trump:

• Passed the First Step Act, a bill which disproportionately impacts Black and minority populations
• Enacted economic policies which have reduced the unemployment rate for Blacks to 5.4%, the lowest level since the measure has been followed
• Signed an Executive Order moving Historically Black Colleges and Universities (HBCUs) under the direct supervision of the White House so that funding and support becomes a national priority
• Created Economic Opportunity Zones, which incentivize long-term capital investment in low-income, often urban, communities

I suppose then that if Ralph Northern(sic) had said something like “there are good people on both sides “ of the Charlottesville statue toppling and subsequent riot, then after a year or so of helping to build the best economy in history, especially benefitting minorities, he would be given the blessing of all the Lefty media and of course, his Lefty party..

Well I say to all you Lefties, “ bless your hearts”.

“Democrats should never resign in shame. Don’t worry. We got your backs.” WaPost

See a perfect example! The only people who know and protect KKK clansmen are Demoncrats and their sycophants in the fake news syndicate and the deep state.

This guy is the Al Jolson of politics?

Well, Northam and the Virginia Democrats did promise to use the military to arrest and/or kill gun owners. No wonder the WaPo luvs them!

“Democracy Dies In Darkness – And We Are The Murder Weapon”

What’s a little black face when Ralphie is for gun control and post birth “abortions?”

I have a simple question. If Mr. Northam had an “R” after his name rather than a “D,” would this have played out the same way? I think we all know the answer to that…

If Republicans are smart (and they’re not called the “Stupid Party” for nothing), they will stop their spineless meltdowns in the face of leftist criticism and just point to Northam and say, “well . . . ?” If the GOP learns nothing else from Trump, I hope they at least learn that.

From your mouth to G-d’s ears…