“I think the Kentucky race that Mitch McConnell was re-elected in against all percentages that pertained beforehand, and exit polling.” 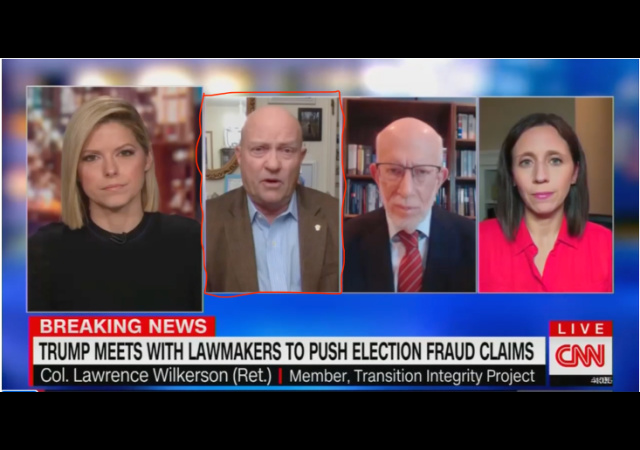 Fill-in host Kate Bolduan and the other panelists did not dispute Wilkerson’s suggestion.

No no no no. You do not get to rail against President Donald Trump and his allies when they scream cheating in the presidential election and then do not pushback when someone makes a similar claim about another election.

Wilkerson’s thoughts came out during a segment about just that, too! And absolutely no pushback.

Wilkerson tried to destroy Trump and those other him:

I think we’re seeing just how desperate Trump is becoming himself and how desperate the last remaining rats on the ship, if you will, are becoming because of that. We see Bannon apparently coming back on scene again probably most ardently seeking a pardon.

We see things like you just pointed out, General Flynn — I don’t know, if I were in charge of the military, if I were the chairman (of the Joint Chiefs) or if I were the secretary of the Defense appropriately, I’d probably call Flynn back to active duty and then prosecute him under the Uniform Code of Military Justice. You can pick your charge there. Incitement to insurrection or whatever. These are desperate people.

Then Wilkerson slips in his own conspiracy theory:

Maybe in Kentucky there was a little cheating. I think the Kentucky race that Mitch McConnell was re-elected in against all percentages that pertained beforehand, and exit polling. And maybe there was something there, but you never look into the Republicans for cheating. And I can tell you that. I’m a Republican.

Is anyone else’s head spinning? I’d say I’m shocked, but I’m not.

Tonight, CNN guest Col. Lawrence Wilkerson claimed, without evidence, that the 2020 election was fantastic but there "was a little cheating" in Kentucky to get Sen. Mitch McConnell reelected. Then claimed no one investigates GOPers for cheating. The host said nothing to correct. pic.twitter.com/m4F8SoxTId

Conspiracy theories are bad no matter who states them.

Why don’t you blow off to some MSM site and remind them of that, concern troll?

What is your issue? I’ve merely stated support for the content of the article.

What is a ‘conspiracy theory’ is now clearly debatable.

Only Big-foot hasn’t come true. Even then, after moooochelle obama’s appearance, we may have found it.

A conspiracy theory to me is something that lacks evidence. When I mean evidence i mean a considered and thoughtful argument or fact. With reference to the examples you mention im not clear on what you are actually theorising.

If anyone would know about cheating it would be the left.

Of course they do. Mcconnell is as dirty as anyone.

He must know where a lot of democrat bodies are buried, or he’d be long gone.

Let’s ask Mitch about all the things revealed in this video report.

Cheating is only wrong when Republicans do it

Everything ‘republican’ is wrong.

It’s a party that is dead to us.

By all means, let’s have an open, honest and thorough discussion about election integrity.

Included in that should be complete source code audits of any and all computerized equipment that is involved, in any way, in any US election.

In fact, it should be a legal requirement that any and all computer equipment used in US elections be open source.

The very idea that proprietary systems are used to conduct our elections is absurd.

Actually, no digital systems should be used in any election. All digital equipment can and will be hacked. There is NO WAY to eliminate fraud or hacking with computers.

Even though many make millions providing the illusion of security, There are many more who live to defeat any and all cyber-security.

im very much in favour if this. Confidence in the elections is important and this would be a step towards that.

Source code audits are nice in theory, but it’s too easy to provide fake source code.

But of course, hundreds of thousands of Biden votes showing up in the middle of the night when the counts had supposedly stopped is perfectly reasonable, but having a news organization’s crappy polls be crap for McConnell is suspicious.

All the Democrats are pointing to is the very evident set of coattails DJT had. They were so concerned about him, they left out cheating in a lot of the down ballot races. That is not evidence of fraud by the Republicans.

No more computerized systems, unless they use blockchain.

I figured one reason for rigging the polling was to provide an insurance policy, in case Biden nonetheless lost. Then the polls would have been used as evidence of fraud on Trump’s behalf.

Sounds like we have bipartisan support for a full, nationwide audit and hand recount!

It would be nice if we could, but the election was conducted in such a fashio that reproducing a count is impossible. In this election (and most probably in all future elections) fraud was legalized by state politicians/courts.

There various machines used for voting, the Dominion machines don’t actually count the votes on the paper ballot, instead, it scans the paper ballot creating an image which is then scanned again for the count.

Then there are the Dominion Voting Machines that present an image of the ballot allowing the voter to mark his choices. This machine then prints a copy of the ballot which the voter then enters into the scanning machine (see above). This machine however, prints a QR code on the paper ballot that the scanner uses for the count. Voters (most voters anyway) cannot read the QR code, so they can’t confirm that the machine’s choices match their own.

The there are the 80 million blank ballots (mail-in) handed off to members of the postal workers union. There is no chain-of-custody for these ballots, making a any determination of who received, marked or returned such ballots impossible.

Finally, all of those mail-in ballots were separated from their envelopes and mixed in with all other ballots, so they cannot be pulled out of the vote if determined to be problematic. This is the same as somebody using your name at the polls to vote in your place; you cannot vote because the fraudulent vote they cannot be determined.

To hold a valid election, all voters must vote:

Anything else is open to widespread fraud, which is why mail-in voting, ballot harvesting and ballot box stuffing was implemented in the first place.

Out election’s winners, from now on will always be the biggest cheaters.

Never happen. The Junta running our former nation is not dumb enough to allow it.

We have to go our own way. Anything less is a fantasy.

I don’t see McConnell lifting a finger to defend Trump voters that had an election stolen in plain sight. Why should they care if he is accused of fraud on CNN? He can defend himself.

In other news that will headline in the NY Times, a Republican in Pennsylvania was caught registering his dead mother for the 2020 election. See? We knew there was fraud, and now the LSM has proven it.

And she was a Democrat who wanted one more vote, for Biden 🙂

Is this the Wilkerson who was Powell’s COS at State. The one who ‘outed’ Plame.

PS. Where do they dig up these reptiles (I was going to write
dinosaurs).