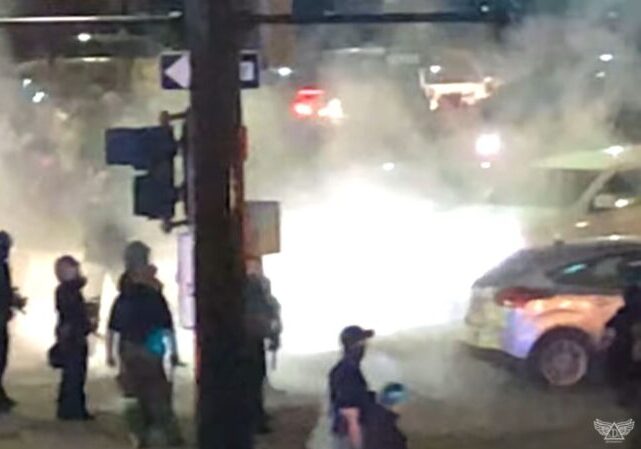 On May 30, 2020, protests and rioting broke out in Detroit after the death of George Floyd. Detroit’s Police Chief appeared on Tucker Carlson Tonight on May 29, 2020, to talk about the riots and proactive policing:

This raw footage conveys the chaotic scene on the streets:

A George Floyd police brutality march in Detroit Saturday started peaceful, then turned violent for the second straight night when protesters faced off with Detroit police in riot gear near the entrance to police headquarters.

Nearly 100 Detroit police officers with body armor and shields stood in multiple rows facing a crowd of nearly 500 at the corner of Third Street and Michigan Avenue in downtown Detroit. One woman walked along the row of officers with her middle finger in their faces. Another swore angrily at officers while protesters held him back….

Many in the crowd chanted, “hands up, don’t shoot,” with their arms raised, in reference to the 2014 police killing of Michael Brown in Ferguson, Missouri.

Some protesters quickly picked up tear gas canisters and threw them back at police. Officers not wearing gas masks were seen evacuating the area. Several protesters affected by the tear gas were hunched over on a sidewalk while others poured water in their eyes.
A cloud of smoke and gas hovered in the air as protesters retreated, amid explosions of tear gas and fireworks.

The “hand up, don’t shoot” chant of the protesters, as you know, was a narrative from the Michael Brown case that became the signature of BLM, but it never actually happened.

This TV news report that night has some footage from May 31:

The protesters threatened to sue, and Detroit basically said to bring it on:

The City of Detroit’s top attorney said he was “pleased to hear” that injured protesters filed a federal lawsuit against city officials and police on Monday because now the city plans to sue demonstrators.

“The litigation will provide the City an opportunity to counter with our own suit — to stop further violations of law and to hopefully reduce the assaults on police officers,” Lawrence Garcia, the City’s corporation counsel, said in a statement.

It’s an unusual claim because a vast majority of the protesters have been peaceful, and even Mayor Mike Duggan and police Chief James Craig have blamed “outside agitators” on the rare cases of violence against police.

Garcia made another unfounded claim, saying protesters are “not about raising awareness around legitimate racial justice concerns.”

“Wearing a bullet-proof vest to a protest shows a certain desire and intent,” Garcia said in a statement. “What is going on nowadays is more about provocation and public nuisance than bringing power to the people.”

A group of protesters filed a federal lawsuit accusing Detroit police of excessive use of force and seeking court-imposed curbs on future use of force. Chris Gilardi at The Intercept reports on the lawsuit and counter-lawsuit by the city:

AT THE END of August, activists in Detroit, like those in dozens of U.S. cities, sued their local government for its police department’s reaction to this year’s Black Lives Matter mobilization. Their complaint alleges that Detroit cops “repeatedly responded with violence” when they took to the streets and includes photos and descriptions of some of the gruesome resulting injuries: bruised and broken ribs, concussions, a collapsed lung, a fractured pelvis. In light of this brutality, the protesters asked a federal judge to bar the police from using “tools of excessive force,” like chemical weapons, sound cannons, and rubber bullets, against them.

Less than a month later, after the court issued temporary orders restricting the cops’ use of force, the city filed its official response. It includes a line-by-line denial of every brutality accusation — and a countersuit.

Detroit’s demonstrators are part of a “civil conspiracy,” the city’s countersuit alleges, “to disturb the peace, engage in disorderly conduct, incite riots, destroy public property,” and resist police orders, among other “illegal acts.” The countercomplaint asks the court to issue judgments declaring that the protesters engaged in this conspiracy and “defamed” the mayor and police, and to award the city damages.

The counter-lawsuit, according to Gilardi, has sparked political objection from, among other, Congresswoman Rashida Tlaib:

The countersuit against Black Lives Matter protesters is a novel move in the post-George Floyd moment, and it has lit a fire under already boiling local tensions. The city has tried to portray it as a routine legal tactic, but many see the counterattack as an effort to suppress the right to protest and to shift the public narrative away from the police department’s violence. Rep. Rashida Tlaib, D-Mich., whose congressional district includes much of Detroit, has lambasted it as “an unthinkable assault on constitutional rights.”

The protesters are fighting back on two separate tracks: one in court, with the backing of national legal groups, and another in the city council, which has the power to cut off funding for the city’s litigation. One council member has already vocalized her opposition to the countersuit, and the activists are working to lobby others ahead of a vote early next year.

It’s hard to predict where the suit will lead, but it may give Detroit the opportunity to present evidence as to coordination of violence, and to address the media narrative that the police were to blame for the “mostly peaceful” protests turning violent.

Is lawfare really a reasonable alternative to law enforcement?

To paraphrase D Rumsfeld ‘we go to war with the Army we have’.

Obviously the tried and true tactics and techniques of policing a civil protest would be more effective and efficient if that’s what the PD was facing. It isn’t.

These crowds are infiltrated, sometimes unwittingly, by violent, hard left anarchists. These anarchists seek to provoke overreaction to be documented by the ubiquitous cell phone cameras.

It’s a good idea, IMO, to fully utilize every tool in the arsenal when appropriate. Based upon the reaction of some anarchist apologists it seems on target.

After all, when you or I want to schedule a march down city streets to culminate at a park or a particular area, we would be filling out paperwork in application for a permit. Some costs come with that, sometimes directly sometimes indirectly.

Assuming that Detroit can meet the burden of proof in the coordination of violence by anarchists using a ‘peaceful’ protest as cover by blending into the crowd then sure sue them into oblivion. I would certainly have had every single person’s phone data collected that was.arrested for starters. Then start the degrees of separation. Oh look, here’s group x or person y in a group call pledging funds in furtherance of criminal activity.

So to the original question; yes lawfare may turn out to be a more effective option. Hit enough financial backers with civil suits/judgement much less criminal charges and things get very real very quickly.

Lawfare is merely using their own favorite technique on them, as Alinsky preached. I say good on ’em, give it back to them, harder.

You don’t even have to win, just torment them endlessly, cost them a fortune, like they did Flynn.

Democrats to BLM .
We won ,you are not needed again until 2024.
Please take a hint.

This is good, but rather than rubber bullets, they should be lead. Take those ingrates out, improve our gene pool.

Ah, Some, Select Black Lives Matter… 50 shades of the Democrat-affiliated KKK, intrusion, occupation, intimidation for a consensus. First, the city kneels for social justice, then they stand for justice. Baby steps.

Mostly peaceful protests do not demolish large city areas in multiple cities. Given the structured/unstructured organization of both BLM and Antifa infiltrators are extremely unlikely. The vetting to even join groups is stringent. Those who attempted to join to see how difficult it would be to ‘infiltrate’ never penetrated deeper than the extreme outer layer, the layer handed the fireworks, lazers,bricks by those obviously of the inner circles.

Sue baby sue
And SUE THE DNC TOO.

BLM has always been a front for the teachers unions and SEIU against the police unions. It is a Democrat intnecine food fight over our tax payer dollars.

BLM never had anthing to do with “black lives”. Just panic from the teachers unions and SEIU the riots would take even more tax dollars away from them.

Some day Blacks will wake up. But not in 2020 – they still though the Democrats were not using them.

I was wondering whether this is something that businesses in Seattle should be looking at. BLM is suing the police for excessive force during the riots. They are hand picking cases where “too much” force was used. So during the riots, incidents 1-9 were ok, but six months later, incident 10 appears to use pepper spray when an armchair quarterback judge thinks it wasn’t needed.

If there’s a case to make, some lawyer will be advertising for the business, you betcha

Why not sue BLM’s parent company the Democrat party?

Oddly enough, the question irv raised was the first thing I thought about… because suing is not the same as prosecuting, and it pissed me off…

But,, ty Professor for a reasonable summary,, that kinda puts things in perspective…

it may give Detroit the opportunity to present evidence as to coordination of violence, and to address the media narrative that the police were to blame for the “mostly peaceful” protests turning violent.

I suppose getting the truth out is what is important, and however that happens is better than what we have seen from most of the media. I like that whole legal concept of discovery.. That can be a bitch….

“getting the truth out” is what the Democrat politicians and other Marxists will ensure never happens.

This was a criminal event and a planned law enforcement failure (planned by the Democrat politicians including the courts). The actors and the financial backers should all be serving hard time at the very least. Instead, people are fooling around with taxpayer’s money.

This devolution will not end well because it can’t. But, the Marxists/Democrats think it will end well…for them (not the little people who are to be used).

Good luck with that! Some Lib judge will declare lack of standing, or that Detroit should have sued before the riots started

How does one sue an organization that doesn’t exist?

They’re not. They’re suing the plaintiff who are suing them. “Black Lives Matter” isn’t an organization, but “Detroit Will Breathe” is, apparently, because it’s suing the city; so now the city is suing it.

Can that be done during Kwanzaa?