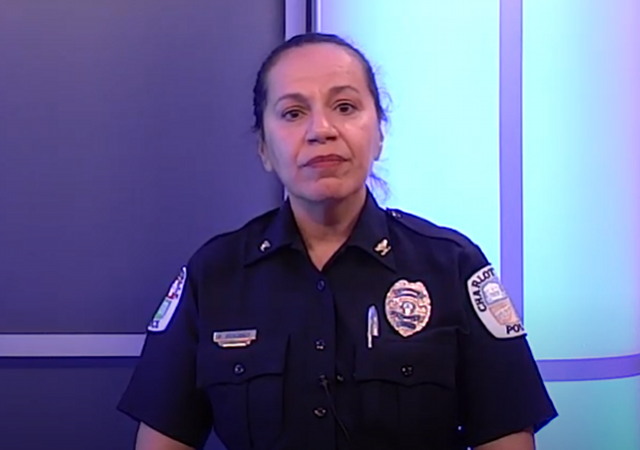 A black man who is a member of the Unitarian Universalist Church in Charlottesville, Virginia was recently stopped by police for fitting the description of a burglary suspect.

The church then sent a letter to the police department decrying the practice of racial profiling, but RaShall Brackney, the Chief of Police, has pushed back on the accusations.

Brackney refutes racial profiling claims made by church, calls on leadership to be held accountable

Charlottesville Police Chief RaShall Brackney refuted claims of racial profiling made by leaders of the Unitarian Universalists of Charlottesville Church following an October incident and called on the church’s leadership to apologize or be terminated during a press conference Thursday.

The press conference followed an internal affairs investigation conducted by the police department after the church published a letter addressed to Brackney on Oct. 15 detailing allegations of racial profiling against one of its members.

According to the letter, which was written by the Rev. Linda Olson Peebles and signed by various church members, a congregant was surrounded by police while walking to church on Oct. 7 after the city police received a call from a University of Virginia student.

Per the letter, the church member was told by city police that he matched the description of a suspect in a series of break-ins, though the letter contends that the suspect looked nothing like the church member, other than that both men are Black.

“He has faced discrimination for ‘walking while black’ before, but this racial profiling and harassment must stop,” the letter reads. “Your police department owes our member an apology. He needs to feel safe in our church neighborhood.”

Here are the released 911 calls:

Buried towards the bottom of the report, it is alleged that the man who was stopped was walking through people’s back yards. Perhaps that had something to do with it:

During the roughly 10-minute clip, the officers can be heard explaining to the man that they are in the area due to a call and because of a series of break-ins nearby. Though the man is difficult to hear in the clip, based on officer responses it appears he is aware of why the officers are in the area and flagged them down because of that.

An officer tells the man that he should not walk through people’s backyards and private property and should instead take a different route, which matches a claim made in the church’s letter that “one of the officers even suggested that he walk another way to church!”…

“I’m not going to keep arguing with you about it. You’re trying to push this race thing that it’s not, and I’m tired of hearing about it,” the officer can be heard saying. “It has nothing to do with race; they just had their house broken into by someone who came from the same direction that is fitting the same description.”

Here is the police bodycam footage:

The Unitarian Universalist Church of Charlottesville doesn’t seem satisfied. On December 10th, they posted the following statement on their website:

The CPD Office of Professional Standards, Internal Affairs Unit, conducted an investigation, and submitted a report of their findings earlier this month. Their interpretation of our letter of concern to them caused them to investigate three categories of violations – Bias Based Policing, Harassment, and Unconstitutional Search.

The final finding is that all charges are “Unfounded,” which is defined by them to mean “No basis of fact to support the allegation.” The Police are holding a public press conference Thursday, December 10, sharing this finding. Our congregation will once again be in the news.

Leaders of the congregation who have talked with our member about what happened are concerned with these findings. The CPD report has a number of discrepancies between the testimony of the police and the account of our church member. The church member’s response to the police report is that it was what is to be expected. He now tells us he is not interested in addressing this any longer, and has asked us to not take any further efforts to address his particular situation.

For anyone who is not aware, the Unitarian Universalist Church, as an organization, is very progressive and very political. There is a UU church in my area which flies a gay pride flag, a trans pride flag, and a Black Lives Matter banner on the front of their building.

“There is a UU church in my area which flies a gay pride flag, a trans pride flag, and a Black Lives Matter banner on the front of their building.”

Though it may not be on one of their flags the UUs are full-on with Abortion Now, Abortion Forever, Without Apology.

Anything lefty the UUs are all for it, from unilateral disarmament by the US as a nation, complete and total gun control of all individuals, to large scale government and high taxes to support it.

The diversity racket plied its trade with a woman who will not kneel. Here’s to progress… two steps forward.

universal unitarians are a church like antifa is a civil rights organization.

I was raised in the Universalist Church, and it was indeed a bona fide church. I left when they merged with the Unitarians back in the ’50’s, but the merger was promoted among the membership as about financial considerations, with the promise that there would be no changes in doctrine. Turns out, it was apparently something like the Hong Kong/China deal – the Unitarians were lying.

What’s interesting is the man they had contact with, dropped the case. He’s the only one with standing.

Did he drop it after a 2am “discussion” with the terminatrix police chief? An offer he couldn’t refuse?

I’m still working on the meaning of “or be terminated” when stated by a sworn, and armed, officer.

So. You noticed that as well.

She didn’t want to say aborted or cancelled, which are well known sociopolitical euphemisms.

The police chief is calling on the church to fire its leaders if they won’t apologize. Fat chance of that happening. The church hired its leaders because they were so woke.

Apologize: say you’re sorry for not locking the scumbag up for 10 years.

This is a good example of why police should wear body cameras: To show what actually happened when they are falsely accused, especially when use for force is involved. The cops in this video are shown bending over backwards to be polite and respectful to a suspect.

There are also a small proportion of “badge heavy” cops who get carried away with their own arrogance and hubris. Body cameras cause these cops to tone down and be more respectful. I never liked working with these guys, because they could turn routine situations into confrontations.

The race card, always in play. If there’s the slightest bit of doubt, reach for it.
American colonists should have picked their own cotton.

I recall a great deal of excitement among the lefty pastors. Finally, they can be relevant. George Floyd is dead.

Perhaps the Police should reply with force of lawsuit whereby the church would have to substantiate their claims and let a jury decide if a BLM, Trans, Gay flag flying church harmed them.

“For anyone who is not aware, the Unitarian Universalist Church, as an organization, is very progressive and very political. There is a UU church in my area which flies a gay pride flag, a trans pride flag, and a Black Lives Matter banner on the front of their building.”

They also tend to like the hammer-and-sickle, and oppose those who fight it.

Bad neighbors are best dealt with by good fences that could be thick hedges or stone walls.

I have heard it said that a person walking into a Unitarian Universalist church and a Reform synagogue would have a very difficult time telling them apart. I don’t know to what extent that’s an exaggeration.

They probably did stop the actual burglar, but he cried racism!