…sparking race-based outrcries from many Democrats 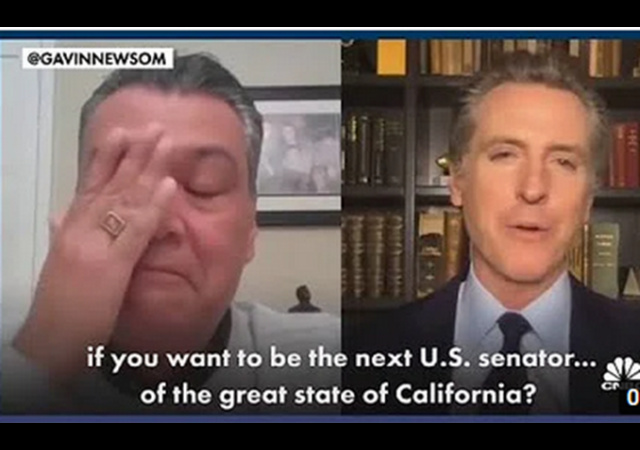 Mid-November, I reported that several California Democrats were lining up for the chance to fill Kamala Harris’ US Senate seat.

The winner in this phase of political reshuffling is the Secretary of State, Alex Padilla.

Padilla, a longtime Newsom ally, will become the first Latino to represent California in the Senate, succeeding another history-making politician, Sen. Kamala Harris. Harris, who was the second Black woman and first South Asian to serve in the Senate, in November became the first woman elected vice president of the United States.

“Through his tenacity, integrity, smarts and grit, California is gaining a tested fighter in their corner who will be a fierce ally in D.C., lifting up our state’s values and making sure we secure the critical resources to emerge stronger from this pandemic. He will be a senator for all Californians,” Newsom said in a statement released Tuesday morning.

…Padilla, who earned a degree in mechanical engineering from the Massachusetts Institute of Technology, went on to become the city’s youngest council president, a state senator and California’s current two-term secretary of state.

“I’m just tremendously honored and humbled and look forward to bringing my story, and my journey, as an important perspective to the deliberations of the United States Senate,” Padilla told The Times in an interview shortly after Tuesday’s announcement. “I know there’s a lot of big-picture issues, but the COVID response is front and center. A relief package was done last weekend but much more is going to be necessary. This pandemic is far from over.”

The “Latino” aspect of Padilla’s nomination is getting all the social media attention. However, the selection isn’t being embraced by many in the Democratic Party who believe the seat should automatically go to a black woman.

During a virtual press conference Tuesday a couple hours after Gov. Gavin Newsom announced the appointment, Breed called it an “unfortunate situation,” hoping to see a Black woman appointed to replace Harris.

Perhaps, however, the most important aspect of Padilla’s career that Legal Insurrection voters should know is that he faces a GOP-sought probe over his involvement in a Biden-connected, political consulting firm’s state contract.

Padilla, a Democrat, is under fire from Republican congressmen over a contract his office awarded to public affairs and political consulting firm SKDKnickerbocker, which created a voter outreach campaign called Vote Safe California.

The Sacramento Bee first reported the contract with the firm, which has been linked to several notable Democrats. Earlier this month, the main banner to the firm’s website featured a picture of President-elect Joe Biden and Harris and thanked them for fighting for the “the soul of the nation,” according to the Bee.

The voter outreach program was used to provide California voters with voting information during the coronavirus pandemic. The Bee reported that Padilla’s office has received more than $34 million worth of invoices from the firm.

It appears that Padilla will fit right in with the Washington, DC crowd!

Has Kamala Harris resigned her senate seat yet? There’s a reason that hasn’t happened yet.

notamemberofanyorganizedpolicital in reply to technerd. | December 23, 2020 at 3:48 pm

Padilla was able to provide the highest payback I suspect. The talk is just noise.

When he started the show this AM… the long goodbye that lasted the 3 hours. I could not handle it… it hurts. My whole life is immersed in disease … fighting it…hoping to win, often settling for a temporary tie and knowing I am going to lose… often. We do the best we can… and Rush knows that. His three score and ten years have been amazing and we have been privileged to have had him as a daily presence.

Kum in my Hair Ass is the first black AND Asian to become a U.S. senator? How does that work? Because she is half black, she makes history, and in the same vein, she makes history by being the first Asian?
Why don’t they just say she is the first Black Asian to screw over the citizens of California? Would make just as sense and be just as true as saying Obama was the first black man mixed with white President. OH, shit. Sorry. Wasn’t supposed to attract attention to the fact that he is malatto. Obama avoided mentioning that as much as possible. He ran as a black man but was only half right.
Kamala would sell her mother to get a single vote.

“She would sell her mother”

Please, that is unfair. Kameltoe would first sell herself as many times as she had to and then sell her mother only as a last resort.

And when you say fill Kamala’s seat, do you mean…?

notamemberofanyorganizedpolicital in reply to Demonized. | December 23, 2020 at 5:33 pm

Two senators from CA. Multiple interest groups (and a lot more if you factor in “intersectionality”). There hasn’t been a male US senator from CA in almost thirty years, so maybe that should factor into the process? Why don’t they come right out and say once female, should never be male again.

Furthermore, as the article points out, there has never been a Latino senator from CA–this in a state where they are now the single largest ethnic group (more than whites) and much larger than blacks.

As this sort of identity politics becomes more intense and the CA GOP reduced to a joke, watch for the implosion of the Dems fighting over a shrinking pie.

So riot!
Break shit. Burn shit. Block traffic. Assault motorists. Throw excrement at cops.
We shouldn’t have to tell you how to run your own party, you should know by now.

P.S. Karen, you ignorant slut, Kamala Harris is no more “AFRICAN American” than Alex Padilla is.

no surprise the Democrats are courting latino voters because there are more of them then African-American voters in California.

Damn shame for California blacks: they’re like abused wives and girlfriends who don’t leave their husbands and boyfriends “because I know he really loves me and I’ll be able to change him.”