Someone remind Swalwell it’s not about him. It’s about “how China is operating” in America right now. 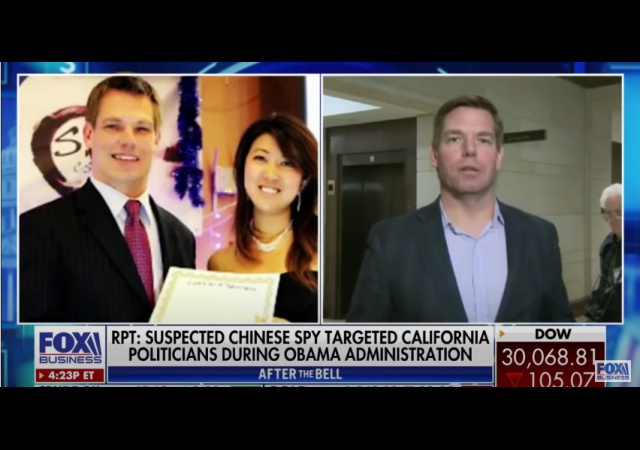 Rep. Eric Swalwell thinks he’s so important that President Donald Trump would plant a Chinese spy story about him.

Axios reporter Jonathan Swan tore apart Swalwell’s claim, reminding the guy that he knew Axios was working on this story in 2019.

Thing is, it’s not only about you, Swalwell. You’re only a part of the story. The subject is China infiltrating our political system.

So I refuse to go into all of that. Swalwell refuses to answer if he slept with the Chinese spy Christine Fang. WHO CARES.

The FBI concluded Swalwell didn’t do anything wrong.

Swalwell is as slimy as they come, but there is no proof of wrongdoing.

Anyway, Swalwell loved the attention and decided to make it about him. He told Politico:

“I’ve been a critic of the president. I’ve spoken out against him. I was on both committees that worked to impeach him,” Swalwell said in an interview on Tuesday. “The timing feels like that should be looked at.”

Swalwell added: “What it appears though that this person — as the story reports — was unsuccessful in whatever they were trying to do. But if intelligence officials are trying to weaponize someone’s cooperation, they are essentially seeking to do what this person was not able to do, which is to try and discredit someone.”

“It would be inappropriate for me to talk about my colleagues’ sourcing, but just use your common sense,” Swan told host Bret Baier Wednesday. “Even Swalwell acknowledges that he first found out Axios was on this in 2019. But … his timeline’s wrong … she’s [Allen-Ebrahimian has] been working on this for more than a year.”

“Anyone who has any passing understanding of how Trump World works, do we really think that they put out some opposition research and then patiently wait[ed] a year — beyond an election — for the very well-respected China correspondent to report it out in a nuanced fashion?” he asked. “I mean, give me a break. It’s completely absurd.

Swan puts Swalwell in his place because, as I said before, it’s not about him:

“The story is really important,” Swan added. “It shows how the Chinese Communist Party operates inside this country. It shows how they infiltrate local politics, how they identify young, in some cases soft targets, people who don’t have a lot of staff around them, who don’t have experience, who don’t actually understand the tactics of the Chinese Communist Party, and then they follow them up … In Eric Swalwell’s case, he has become a very, very powerful, important member of Congress with access to the nation’s top secrets. So it’s a very important story just to understand how China is operating … right now in this country.”

“The FBI concluded Swalwell didn’t do anything wrong.”

True, nothing ‘wong’ with shagging a spy – that’s why they even made a film about it:

notamemberofanyorganizedpolicital in reply to Groundhog Day. | December 10, 2020 at 4:31 pm

For four years the FBI lied and said they had nothing on Seth Rich, but then today we learn that the FBI has 20,000 pages and a laptop all related to Seth Rich. The Deep State FBI liars finally brought the Seth Rich case out of the closet.

The coup continues. If SuperSpreader Harris becomes president, we’re done for. Literally – our nation will NEVER recover from Obama II.

Either Trump is sworn in, or we have to secede. It’s our only hope to live the life we made for ourselves from the blood of people who defended it.

Start talking secession, everyone, or you’ll shortly be enslaved. We are living in the Weimar Republic II.

Biden is already picking criminals to re-infest the highest offices of our government:

Did Susan Rice Commit A Crime? It’s Starting To Look That Way:
https://www.investors.com/politics/editorials/did-susan-rice-commit-a-crime-its-starting-to-look-that-way/

PDF can be seen here: https://cdn.donaldjtrump.com/public-files/press_assets/no.-22o155-original-motion-to-intervene.pdf

Don Jr walks out of a meeting on Russian adoption and he gets over 30 hours of interrogation. Swallow well says nothing to see here and everyone goes OK sorry we bothered you.

Our government is completely corrupted. COMPLETELY, from the dumbest democrats (swalwell, omar, cortez, 8-ball, etc.) all the way up to our congress, the pentagon, our media, our schools, our judges, etc.

The coup de grace was William Barr’s knife in our back while America was on its knees.

If Trump is not sworn in, face it: we live in Hong Kong. And we know where that’s going.

notamemberofanyorganizedpolicital in reply to TheFineReport.com. | December 10, 2020 at 4:34 pm

Trump wasn’t the guy dipping his wick in the Chinese spy.

Swalwell is the tiniest tip of a titanic Communist China iceberg inside our nation.

notamemberofanyorganizedpolicital in reply to TheFineReport.com. | December 10, 2020 at 4:35 pm

Every Chinese national in this country is their “spy.”

“People Are Upset, and

They Have a Right To Be…

A Coup Is Taking Place In Front of Our Eyes.”

notamemberofanyorganizedpolicital in reply to TheFineReport.com. | December 10, 2020 at 4:37 pm

All across this great country, people are talking about the 2020 election being stolen by senile Joe Biden and his gang of corrupt Anti-American goons.”

And all of the Communist-Democrat Evil Big SiliCON Valley & Tech & Media can’t stop WE THE PEOPLE.

Funny how the FBI can conclude “nothing to see here” in ten minutes when a Left Wing Democrat is involved, but it takes all sorts of plants, “Operations”, “Insurance policies”, etc. where Trump was (possibly) involved.

notamemberofanyorganizedpolicital in reply to lichau. | December 10, 2020 at 4:45 pm

“Swalwell is as slimy as they come, but there is no proof of wrongdoing.”

He had a foreign national bundle donations.
He hired an intern based on Fang’s recommendation – i.e. she placed the intern.
When did the FBI start doing the right thing and go against a Democrat? Why did they tell Swalwell about his actual CCP spy, but told Trump nothing.
He was compromised. Given his position on the House Intel Committee, it was wrong to keep him there. And nobody told the Republicans – on the committee or at all.

Had that happened to me, when I was in the Navy, my clearance would have be removed at the very least. He is a Congressman, who was on the Intel Committee. There was plenty of wrongdoing.

He hasn’t admitted to the sex yet, which we already know happened. There’s compromised and there’s falling for a honeypot compromised. He did plenty wrong. And the FBI is doing there usual, which is plenty wrong in its own right.

“Swalwell refuses to answer if he slept with the Chinese spy Christine Fang. WHO CARES.”

Right. We can just ask her.

She was warned by swallow-it and fled back to China.

Swallow it is guilty of colluding with the Chinese. He should be impeached and sent to prison, just like he wanted to do to Trump.

notamemberofanyorganizedpolicital in reply to ConradCA. | December 10, 2020 at 6:33 pm

And he’s not the only one….

Probably the reason he’s so vociferous about it is because he’s undoubtedly spilled many state secrets.
She’s got his little pebbles in her purse and when she says dance he asks “Which song”?

Eric Smallwang–he’s the guy who let the Chinese spy get in his bed.

Trump was otherwise occupied with a much prettier woman.

Forget about Axios starting in 2019.
This story is set in 2015, when Trump was still doing “The Apprentice”.

Get this FOOL out of Congress.

More than once, I’ve said “screw the Chinese communists.”

Little did I know how closely Swalwell was listening.