Will work with Biden transition team 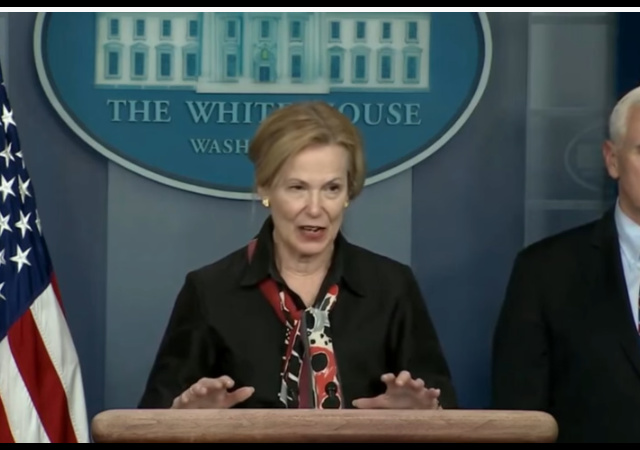 Dr. Birx was outed Sunday for defying her own holiday get-together guidance issued to the general public and has decided to retire after the “overwhelming” experience of having her hypocrisy gracing national headlines.

Birx will help the Biden team and then she’s out.

Dr. Deborah Birx has announced she plans to retire after being outed on Sunday for not following her own holiday travel guidance, calling the experience “overwhelming.”

In an interview with Newsy, the White House coronavirus task force coordinator said she would help the incoming Biden administration but then planned to head for the exits.

The infectious disease expert, 64, was outed on Sunday for not following her own travel guidance when she was joined by three different generations of family at one of her vacation properties on Fenwick Island in Delaware the day after Thanksgiving.

She was roundly criticized for not following her own orders after publicly urging Americans in the days leading up to Thanksgiving to limit gatherings to “your immediate household.”

Monday we blogged about Dr. Birx’s Thanksgiving which included a gathering of three generations of family (a lovely thing on its own) which directly contradicted her guidance to limit celebrations to members of your immediate household.

Now, if only a certain SOMEONE will follow her out the door …

TheFineReport.com in reply to notamemberofanyorganizedpolicital. | December 22, 2020 at 5:23 pm

What are you talking about? – She just got PROMOTED: she will collect her full retirement, and in return for helping conspire to destroy our Republic (and it is destroyed), she gets a taxpayer-funded job as a useful hack for the incoming Whore House.

I have to say that she’s generally seemed OK. Not pro-Trump but not strategically stabbing Trump either.

So irritating to hear people like her complain about how some kerfuffle has troubled her family.

She would completely disagree with herself, if she had had no income during this entire period, as so many have suffered.

It’s a damn shame any of these govt. officials get one dime in pay while they’ve denied income to any others.

ZERO sympathy with her. ZERO.

Agree 100 percent. If she truly believed in what she said, she could have cameras on her all day. I have a friend who truly believes. I have not seen her since February. You would never catch her in a moment of hypocrisy. Our friendship of nearly 16 years has gone by the wayside. My 80 year old mom is begging to see her family for Christmas. It is her choice.

Yes, she was roundly criticized. What does she think President Trump has gone through for years!

It’s both — she doesn’t believe the rules, and she disobeyed the rules that were in place.

She made the rules! Her and her cohorts mandated that we all had to comply. Governors and police harass us. Mask Monkeys attack us.

So, yes, she disobeyed the very rules her team created.

Or, that she does believe them in the sense that if everyone else follows them, she’s less at risk by flouting them. It’s about creating herd immunity or safe conditions, so she doesn’t lose her freedom! The many violations of rules by mayors, governors, and other rule-setters tells me that this especially vile thing is what’s going on.

They are vile. Evil. They need to be punished so they regret breaking the rules. Maybe a future leadership can do that; they need to be made to regret it, publicly, for the mental health of the population.

Why are these people so arrogant that they believe no one will notice? (Think Queen Nancy getting her hair done or Cuomo eating out.)

What’s the point of being an elite if you can’t lord it over the prolés?

They know they are protected by the media, who have have the nation willfully brainwashed.

We need to discuss the divorce.

It’s the dang hypocrisy of it all!!

Paychecks, holidays, and travel for me, but not for thee.

“this experience has been a bit overwhelming. It has been very difficult on my family … I think what was done over the last week to my family.”

So, Dr Birx, have you considered how difficult it has been on the families that you encouraged to be locked down? Parents dying, and their children could not go to the funeral. Parents in retirement homes, and their families had to “visit” them through windows.

Weddings, birthdays, holidays, church attendance, and much more canceled because of you and your pigmy friend, Dr Fauxchi.

Yet, here you are. Vacationing at your Fenwick Island vacation home, enjoying Thanksgiving with your family. All the while demanding that others can’t.

The only thing missing is your husband demanding that he be able to have his boat taken out of storage.

We need mass defiance. Open up, ditch the masks, forget about the silly 6 ft thing, and let’s get back to normal. It’s obvious there is no extinction-level threat to this “virus” that’s shown itself to be the equivalent of a moderately bad flu bug at worst.

Scandal? When world class hypocrisy is the Democrat standard, then rules are blatantly disregarded, is it really scandal?

“Birx will help the Biden team and then she’s out.”

The witch has been helping the marxists all along.

Higher-ups in any government are politicians. They keep their jobs by doing what their political masters want them to do, right or wrong. Birx is no exception. Where people make a big mistake is thinking that DJ Trump was the master of his administration. He was not. The career employees of the Executive Branch answered to other masters. Now, it is possible that Birx was not comfortable as a lying mouthpiece for special interests and the thanksgiving incident was simply a good excuse to graciously leave that position, without destroying her future income.

That’s largely Trump’s fault though. At the end of the 2017 transition, he flushed all the Trump loyalists and didn’t offer them permanent administration jobs. Instead he hired the Swamp.

Trump needs to win now because we can’t afford to have Biden. But don’t pretend Trump is in love with us “Trumpers”. He has his own circle.

If only she had said “I was wrong, I am to blame for violating the rules I imposed on others, I am sorry.” she could have been forgiven.

But by her refusal to apologize, she acts just like those who are obviously leftists.