This imported surge, especially around the 2020 Christmas season, could be fiscally deadly for New Yorkers who can afford it the least. 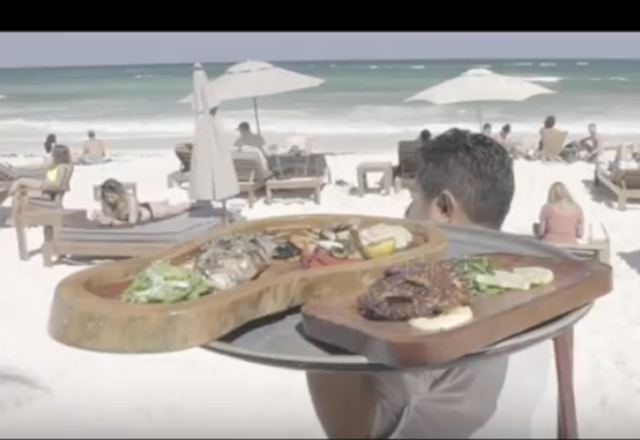 Many of the moralists who preach social distancing and bland obedience to mask mandates are college-educated hipsters, especially those on either the East or West Coasts.

Yet it was these very hipsters who attended a Burning Man-style festival in Mexico that turns out to have been a coronavirus ‘superspreader’ event, with several participants bringing COVID-19 back with them to New York City as a pathogenic souvenir.

Private COVID-19 testing company Checkmate Health Strategies said over half of its recent positive cases in the Big Apple were directly tied to the Art With Me event in Tulum, the Daily Beast reported.

“I would say that 60 to 70 percent of my positives in the last couple weeks in New York City have been a direct result of either people coming back from Art With Me — or who have been directly exposed to someone who attended Art With Me,” said founder Eleonora Walczak.

The four-day festival — which involves art workshops and group meditations by day and raging partying by night — took place as planned from Nov. 11 to 15 in COVID-ravaged Mexico.

Photos and videos posted online show dozens of people without masks attending parties linked to the beachfront festival, dancing and drinking the night away.

The festival posted multiple photos on its own Instagram of groups participating in what appeared to be meditation and yoga sessions. In those images, a handful of people could be seen wearing masks.

The festival, which bills itself as an ‘immersive’ art and music event, has been likened to Burning Man.

It is not yet clear exactly how many people in total attended the event but some of the parties tied to the festival had about 150 partygoers.

Spoke with a number of people who got/treated people for COVID about how Tulum's Burning Man became a COVID superspreader event, with many attendees bringing the virus back to the U.S. https://t.co/1L32Lc4Qmw

One New Yorker recounted an experience of a friend who became infected at the event.

Angelica, a New York City-based woman who asked Fox News not to reveal her last name, moved to Tulum during the pandemic and contracted the virus over the summer. She told Fox News a friend who went to the Art With Me parties became sick with virus symptoms back in New York.

“My friend was in Tulum on vacation during that time and she stayed in the hotel zone next to the festival,” Angelica said. “She did go to the parties and some installations. She already started feeling bad in Tulum and by the time she landed in New York City she had all the [COVID] symptoms: headaches, fever, diarrhea, weakness, loss of scent — practically every symptom on the list except shortness of breath. It lasted at least a week until she was better.”

I would be more sanguine about attendees making choices for themselves, regarding potential infection of a virus with normally mild symptoms and a very low mortality rate (especially for young adults). However, many New Yorkers are forced to shutter businesses due to absurd, politically-driven lockdown rules. This imported surge, especially around the 2020 Christmas season, could be fiscally deadly for those who can afford it the least.

She (the New Yorker) had all the symptoms but did not get an actual test. Keep in mind that a whole slew of other conditions give a similar constellation of symptoms. I have pretty much had the sniffles all summer and fall yet neither antibody test on my blood donation nor swab when I was in the hospital to get the pacer in August revealed positivity. So lets combine common symptoms, with a highly unreliable test, and add in a huge population of old people already on deaths door. Sounds like a perfect recipe to create conditions where the Constitution can be discarded.

Put it all together though, and it’s reasonable to conclude she had Wuhan. Loss of smell and typical flu symptoms and diarrehea and muscle weakness, all in someone who seems to be under 30. Add where and when: she attended an event which was confirmed as the source of other Wuhan cases by multiple tests, not just one. The test isn’t 100% reliable, but it’s not “highly unreliable”. The do-it-yourself instant test is iffy, but that’s not what you get in a clinic.

All covid tests are highly unreliable. The case numbers are obviously bogus.

she had all the [COVID] symptoms: headaches, fever, diarrhea, weakness, loss of scent — practically every symptom on the list except shortness of breath. It lasted at least a week until she was better.

She’s young enough she’ll probably shrug off the virus. The NYC economy and people over 55 will take a much harder hit. Typical hipster, it’s s c r u everyone other than precious me.

Private COVID-19 testing company Checkmate Health Strategies said over half of its recent positive cases in the Big Apple were directly tied to the Art With Me event in Tulum, the Daily Beast reported.

Why should I care that a bunch of people allegedly got covid? I want to know how many were hospitalized with a serious condition or died. The article is curiously silent on the subject.

“I have nothing good to say about this event,” said a woman who got COVID-19 after attending the fest.

“All I will say is that there was not one mask and I got more sick than I ever did in my entire life after that party.”

No sympathy from me. You could have turned around and immediately left when you saw what a shit show of a covid super-spreader event it was. But you didn’t. And you paid the price and got what you deserved. So quit your whining.