Tucker Carlson: Big Tech Took Part in ‘One of the Worst Forms of Election Tampering’

Tucker Carlson: Big Tech Took Part in ‘One of the Worst Forms of Election Tampering’

“You can’t have fraud in an election because then no one will believe in elections and then things fall apart.” 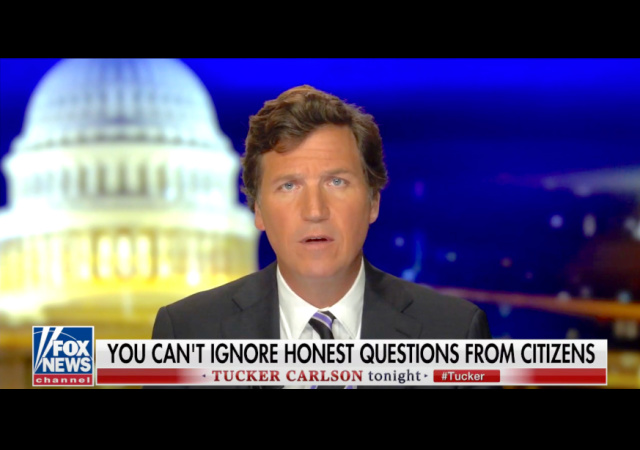 Voter fraud allegations have run rampant since Election Night, especially allegations from witnesses at the polls.

But Tucker Carlson noted two other sectors who played a huge part but appearing to get off scot-free: Big Tech and pollsters.

One of the first things that we should be honest about is one of the worst forms of election tampering took place far from polling sites. It wasn’t votes from dead people. Those are bad, but they weren’t the worst thing. The worst things are more obvious than that.

The worst thing was Silicon Valley.

The tech monopolies spent the final weeks of the presidential election suppressing the voices of Trump supporter’s and hiding damaging information about his opponent Joe Biden. That happened. We saw it firsthand. We experienced it. You may have, too.

In August, Facebook banned the pro-Trump super PAC committee To Defend the President from buying any campaign advertising. What? What election has that happened in? None.

Just a few weeks ago, as you well know, The New York Post published true and accurate details of the Biden family’s lucrative and damaging overseas influence-peddling operation, which was real, which Joe Biden knew about.

Facebook, in turn, limited the distribution of this article, and Twitter blocked people from posting it. In other words, they censored it. They kept people from knowing about it, and on what basis? Nothing in those articles was untrue, but they censored it anyway, along with any content that was critical of lockdowns and mandatory mask-wearing. Why? Because Biden supported those.

There are many threads to this. There is overwhelming evidence this happens — we’ll just pick one piece, a report from Breitbart.

They took a lot of time to look into what Google was doing to them. They found that Google suppressed its stories about Joe Biden in the middle of 2020 through Election Day, suppressed them.

Quote, “Clicks and impressions to Breitbart News from ‘Joe Biden’ Google searches displayed a healthy pattern of activity in the middle of 2020 when they suddenly flatlined … the plunge first occurred after a major update to Google’s search algorithm in May 2020.”

Ask anybody in digital news, do searches for the names of candidates decline as we get closer to the election? No, probably not. In fact, they accelerate, but not if Google is censoring you, which is what they were doing.

It also looks suspicious because Biden has already hired or already considering people from Big Tech for his administration:

Carlson concluded: “If we are going to have real and fair elections going forward, then we have to end Silicon Valley’s total control of information. It’s the first thing we must do. We can’t have free and fair elections without that. If voters aren’t allowed to learn critical facts about political candidates before they vote, you can’t have a democracy. And of course, that’s why they are doing it.”

Carlson also pointed out the problem with the polls. Polls are not perfect, but Carlson said that nearly all of the “mistakes helped Joe Biden.”

RealClearPolitics had Biden up 7% and Quinnipiac had him over 11%. Biden only has a 3% lead as of now.

Those polls allowed Harrison’s campaign to go to the big Democratic donors and raise $57 million in the final quarter. That is “the largest single-quarter total by any candidate in US Senate history.”

Polls influence voting behavior. So effectively all those errors amount to voter suppression.

But we cannot escape the allegations at the polls.

?? Detroit elections worker: "I was instructed by my supervisor to adjust the mailing date of these absentee ballot packages to be dated earlier than they were actually sent. The supervisor was making announcements for all workers to engage in this practice." ??

Detroit Poll watcher: At 4:30 a.m. on Nov. 4 "tens of thousands of ballots" delivered from out-of-state

"Unlike the other ballots, these boxes were brought in from the rear of the room"

"I specifically noticed every ballot I observed was cast for Joe Biden" pic.twitter.com/wFHhGsxEWS

A poll watcher in Nevada shares his experience of being thrown out from monitoring ongoing vote counting. pic.twitter.com/Dj15JnOtBz

Nothing to see here!

"…dead voters, votes from thousands who no longer live in Nevada, and a van marked 'Biden-Harris' full of opened mail-in ballots"#StopTheStealhttps://t.co/jZL0Xtdd0O

Carlson admitted that an investigation and changes in votes will unlikely change the result.

But that is not what matters. What matters is the integrity of our system.

“But changing the election results is not the whole point. The real point is that fraud took place, and that should horrify us. If you want people to believe that our system is real, that our system is worth say joining the military and dying to protect, then you’ve got to get to the bottom of what just happened and you’ve got to do it as quickly and responsibly as you can. You can’t have fraud in an election because then no one will believe in elections and then things fall apart.”

“The point isn’t that we need to keep investigating until Donald Trump wins, that is not the point. The point is we need to find out what happened so that the rest of us believe the system is real. And to make that happen, Congress ought to investigate every meaningful claim of illegal voting. Every legitimate claim that is raised must be investigated. We need facts. Transparency is the key.”

The ratings at Fox News have fallen off the cliff since election night, after months of selling out their core audience, their former viewers have spoken. It may be difficult to win them back.
CNN held at least the two top time slots in terms of ratings, Wednesday, Thursday and Friday.

Newsmax: ” and the biggest loser of the night is Fox News! “

As long as Democrats control Congress and the WH, there will NEVER be:

1. A major investigation as to what happened here.
2. Major Federal election laws to correct the wrongs.
3. Another fair election in my lifetime, if ever.

We might as well take our names from the voters rolls.

If rampant election fraud occurred, then the only effective redress, for the problem, is to reverse the election results, where it occurred. For decades, we have seen instances of systematic vote fraud, in Democrat strongholds all over this country. The response has always been, “we’ll put safeguards in place and it will never happen again”. Of course, it does happen again. And, in the 2020 Presidential election, election officials made no attempt to hide the fact that they knowingly violated those safeguards. They did not care, because, historically, nothing would be done about it.

First, you clean up the immediate mess, the actual vote fraud which, apparently, change to outcome of a nation election. Then, you can take steps to eliminate other forms of fraudulent behavior, such as voter suppression.

The immediate mess isn’t the fraud, but the willingness of non-Republicans/conservatives to engage in criminality and fascism:

AG Barr was stirred out of his sleep for a few moments, but he’s back to zzzzzzzzzzzz……

No, the most important mess is the fact that this fraud occurred. If it is not corrected and the result revered, there will be NO further action taken, by the government. Once the government is out of the picture, then extra-governmental resources will have to be used to redress the situation.

.
Google and its tech comrades regularly do more harm than Covid-19. All of the above are invisible.

It’s only invisible if you allow yourself to be inside the Matrix.

The Fox poll was just as inaccurate as the rest of them, haven’t heard one story or one host on that network advocate terminating the contract with that polling companies. The polling companies are Beacon Research and Shaw and Company according to their reporting.
https://www.foxnews.com/politics/poll-biden-trump-lead-narrows-slightly

MAGA rallies are already popping up everywhere. This is going to turn into a movement if this election corruption isn’t addressed and soon. If they ignore it and Biden prevails, Trump can start campaigning right now for his return in 2024.

If the Dems are already fearing the usual bloodbath heading their way in the 2022 off-year elections, just imagine how much worse it will be with the most popular Trump ever fanning the flames over corruption and whatever other issue the Dems gift to him should Biden win.

Carlson was right on, and Victor Davis Hanson nicely summed up why it’s important.

You will have to have STRONG, 100% IRREFUTABLE EVIDENCE to convince 70+ million LEGAL USA voters that Biden ‘won’ anything…

notamemberofanyorganizedpolicital in reply to LisaGinNZ. | November 10, 2020 at 4:39 pm

This worries me. There is literally too much evidence – it’s like they want to be found.

Yes. As I said before the election, the goal is to force Trump to contest the election results, thus creating the narrative that he’s unlawfully clinging to power.

All of this shrieking about Big Tech and pollsters. Yes, soi-disant conservatives, let’s chuck the First and Fifth Amendments into the dustbin of history because some big corporations wouldn’t let you use their computers for free, and some public opinion commentators said things you disagreed with. That’s a great reason to destroy what’s left of the Republic.

Pelosi is choosing curtains and china…

notamemberofanyorganizedpolicital in reply to henrybowman. | November 10, 2020 at 4:37 pm

Pelosi wants to be the first female president, although I thought Obama already filled that slot……..

While it is certainly possible that the liberals and Dems have more than on string to their bow, this might not be the reality.

Look, in 2015.2019 the Dems were blindsided by the rise of Trump and the shutting down of their access to the NSA database, through the FISA 702 program, by Adm. Rogers. From there they engaged in a slap-dash operation to reestablish their surveillance capability of the Trump campaign. IN so doing, they left a huge amount of evidence of wrongdoing. Nothing ever came of that.

Fast forward to 2020. The Dems/Liberal/Progressive have been assured by the pollsters that Biden will win the elect by a huge margin. They install some opportunities for election fraud, but probably do not think that they will need to use them. Suddenly, 12 hours after the polls close, Trump has won a number of states and is building large or huge leads in others. What to do? Just as in 2016, they embark on a program which is slap-dash. Once begun, they have to pull out all stops because, unless Biden is now elected, people may end up in prison. This was the same fear which existed in 2016. But, they also counted on the media and Big Tech to run interference for them. So, once again, we have a situation where the Establishment is faced with an operation which has left an enormous amount of evidence of wrongdoing behind. Once again, it remains to be seen if the nation will allow this to go uncorrected and unpunished.

Wow, I’m so glad that the RINOs summoned Dorsey to testify, he unambiguously lied to their faces, and Cruz sent an angry tweet about it!