There are several swing states where the votes have not yet been fully counted and where there may be legal challenges. There is enormous pressure on Trump to concede, with Biden, the media, and many in the world acting like it is a done deal. 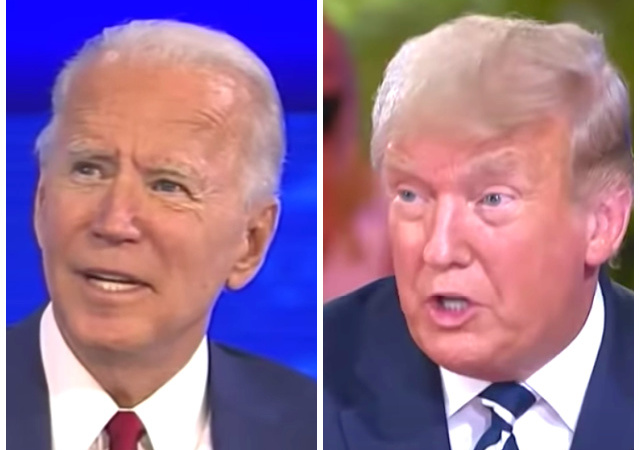 The major networks have declared Joe Biden the winner of the national election. The Iranian Mullahs and their terrorist progeny, and the Chinese Communist Party, are thrilled. Other world leaders are falling in line, and Biden is acting as if he’s President already. But believe it or not, there are several swing states where the votes have not yet been fully counted and where there may be legal challenges. There is enormous pressure on Trump to concede.

Refresh the page for updates. The Legal Insurrection “Elections” Twitter Feed below is the best way to follow breaking news, and includes our own tweets plus tweets from over 50 Twitter accounts we have selected.

If you want to see how much the fix is in, votes are still being counted, no recounts have started, challenges are ignored, 5 states are within one per cent but the media pack has declared Biden won.

If Joe Biden really wants to unify this country, he should wait until we can ensure that we had a fair election.

We the People choose our government by consent of the governed. We need to ensure that our elections are fair, honest, and transparent.

Al Gore got his day in court. President Trump and the 70 million Americans who voted for him should be afforded the same opportunity. pic.twitter.com/ww1KJHJQ2H

CNN: Melania Trump among those telling Trump to concede

The American people deserve fair elections. Every legal – not illegal – vote should be counted. We must protect our democracy with complete transparency.

More shrinkage but still may not be enough

I don't care what you say:#WeMatter

President Trump’s campaign has announced that Rep. Doug Collins will lead the recount efforts in Georgia.

"We are concerned about the lack of transparency in the tabulation process, especially given the reports of irregularities and improper ballot harvesting in Georgia," said Matt Morgan, Trump 2020 general counsel

Florida is now a red state, and will pick up a couple of congressional districts and electoral college votes after 2020 census.

Gap between the national popular vote & Florida is the widest, in favor of Republicans, since 1992. And it’s not close.

Megyn Kelly gets it, unlike so many of her former Fox News colleagues.

Ian, you’re out of touch if you think 70m Americans who have been unfairly demonized as the worst of humanity for 4yrs are now going to hug those who’ve viciously attacked them (& are now making lists of their names). I’m talking reality, which is my job, not pie-in-the-sky stuff https://t.co/ZgblLkiE3P

To Concede or Not?

“This is a contested election,” Lindsey Graham says on Fox. “President Trump should not concede.”

Even in a country with a ludicrous, anachronistic three-month “transition period”, power drains very quickly, as it has drained, remorselessly, in the twenty-four hours since the networks pronounced the election over. It will drain further over the next day, until various courthouses from Philadelphia to Vegas open on Monday morning. The President better have a very strong case when he lays his complaints before them, and not the usual amateur-hour crap from Jared, who should be nowhere near the post-election “legal strategy”, never mind in charge of it.

One of the notable features of the last five days is that Rupert Murdoch, in particular, is so over Trump: Having declared Arizona early on Tuesday night, the Murdoch properties have moved on to call for the President to “stop the ‘stolen election’ rhetoric” and “concede gracefully“. His loudest voices on Fox have been relegated to Cameo, and those still on air are strangely muted or – what’s the word? – “pivoting”, as daintily as they can.

This isn’t anything to do with Murdoch’s “liberal daughters-in-law”; this is Rupert himself, whom Trump declined to court and whose network he insulted on air even on election morning. That night, after the Arizona decision, Jared Kushner called Murdoch to complain. Rupert took the call; he would not take a call from Jared today.

I’m moving on – from Fox News.

I expect Fox to lose a lot of viewers over this.

Those that are pressuring Trump to concede totally don’t know the man.

They’ve been trashing, lying, and vile towards President Trump and us four long years. Now, they want to play the song and dance “Can’t We All Get Along”! How many times have we been down this road.

Ole Abe is to have said:

“The true rule, in determining to embrace, or reject any thing, is not whether it have any evil in it; but whether it have more evil, than of good. There are few things wholly evil, or wholly good. Almost every thing, especially of government policy, is an inseparable compound of the two; so that our best judgment of the preponderance between them is continually demanded.” ~ Abraham Lincoln

As far as I’m concerned, there is more evil than good with Biden and his cohorts. Won’t be any “Embraceable You” coming from me.

Indeed pressure is and will be brought for PDJT to concede.

IMO, he will not do so prior to all avenues being exhausted. He isn’t a ‘norms’ kind of guy, that is why he is President. He will lose his ability to influence and exercise a degree of control over the MAGA portion of the electorate if he quits.

If the results show he lost in fact, after a legitimate review he can then concede. I would want him to do so at the point where the substantial irregular ballot issues and statistically unusual patterns are sufficiently explained.

I would hope we all would accept a legitimate vote tally. Assuming that it is legit.

It was not and cannot be legitimate. Too many dirty deeds.

What I mean is that once initial tally completed and Biden is ‘ahead’ by 50,000 or whatever and we turn up 49,999 fraudulent ballots, one short of a tie, then I will grudgingly accept that the process was legit.

However, that means the entire process plays out: let justice be done though the heavens may fall.

I saw a comment to the effect we should get used to President Alzheimer and Vice President Marx. I saw another one where somebody suggested we will see courses in conversational Mandarin and Arabic in our schools. It’s a little premature for that.
.

One huge psyop operation on now. Google is watching… facebook is watching…twitter is watching…. and reporting to DNC/Biden/Harris.

Of course the Democrat’s Propaganda ministry wants all the recounts to be ignored, the fraud statistics to be brushed aside, they have wantedTrump gone since day -60 of his administration.

Mitt gets torn apart by a real Republican.

The 70 million Americans who voted for
@realDonaldTrump
are not moving on just because the media says so. Serious election integrity concerns (read Alito’s opinion) in several states that the media should be investigating.
Quote Tweet

Mitt Romney
@MittRomney
· Nov 7
Ann and I extend our congratulations to President-elect Joe Biden and Vice President-elect Kamala Harris. We know both of them as people of good will and admirable character. We pray that God may bless them in the days and years ahead.

The only thing that the hag has ever said that I agree with:

Did a count at a couple ammo counters today while out grocery shopping.
Not much ammo available at all. Most of what was left was bird shot.