The data doesn’t back up claims that Stacey Abrams’ GOTV efforts – which focused almost exclusively on getting black Americans registered and out to the polls – were key to Joe Biden possibly edging out Trump in Georgia.

Even as votes were still being counted in the state of Georgia the first time around, Stacey Abrams was being hailed in media/Democrat circles as the tireless hero who may have flipped her state blue in the presidential election.

Here were some of the headlines:

As Joe Biden edged ahead of President Donald Trump in Georgia, mentions of Stacey Abrams lit up Twitter and trended nationally as politicians, activists and celebrities credited the Democrat for helping put Georgia into play in 2020. https://t.co/bHhTYPSMSA

If Joe Biden becomes the first Democratic presidential candidate to win Georgia since 1992, he'll have Stacey Abrams to thank. https://t.co/6ZIUrAbLom

If you look on YouTube, there are scores of video clips from media outlets touting her work in allegedly giving 2020 Democratic presidential nominee Joe Biden the edge at the polls in Georgia.

For example, CBS News reported that Abrams “is receiving widespread praise for her efforts to get out the minority vote in her state, which played a key role in the 2020 presidential race.” The Washington Post reported on “how a once reliably red Georgia underwent a political transformation in 2020 due to the work of former gubernatorial candidate Stacey Abrams.”

The New York Times even credited Abrams for “inspiring” an astonishing 800,000 people to register to vote:

Celebrities, activists and voters across Georgia credited Stacey Abrams with building a well-funded network of organizations that highlighted voter suppression in the state and inspired an estimated 800,000 residents to register to vote https://t.co/eX9ABEflx0

As did NBC News, who made this claim about Abrams’ “Fair Fight” organization: 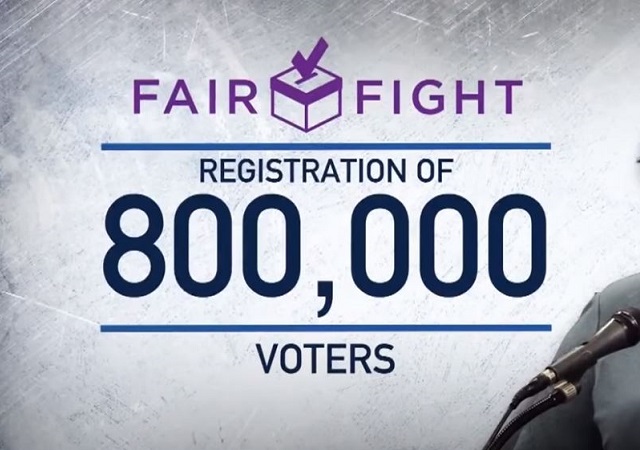 The problem here is the hard data doesn’t back up the various media-driven narratives that Stacey Abrams’ GOTV efforts – which are focused almost exclusively on getting African-Americans registered to vote and out to the polls – were ultimately what “turned Georgia blue” (if the current numbers hold).

Case in point, this thread (and article) from the NYT’s “Upshot” polling/data analyst Nate Cohn:

Georgia is the first state where we have fully updated vote history data, and it shows the Black share of the electorate falling to its lowest level since 2006 pic.twitter.com/kcquppig1I

As a result, Biden's gains were concentrated in a ring around Atlanta pic.twitter.com/nY8yg9NblE

What also needs to be factored in when talking about Georgia elections is that, as has also been the case in North Carolina, they have been getting more competitive over the last decade or so, thanks not so much to Stacey Abrams but the state’s growing population and changing demographics. This includes the people who move to southern states to escape high-tax states up north – many of who then promptly turn around and vote for the same types of Democratic politicians who drive up the cost of living, which forces residents out.

Those types of voters have been moving to North Carolina as well, which has changed the political landscape here over the last several elections – all with no prominent Stacey Abrams-type GOTV “motivator.”

Also, the reports from the media about how Abrams was supposedly responsible for registering 800,000 voters are ridiculous:

There are now a record 7.6 million registered voters in Georgia, according to voter registration rolls obtained by The Atlanta Journal-Constitution from the secretary of state’s office after the Oct. 5 registration deadline.

Automatic voter registration when Georgians get their driver’s licenses greatly contributed to the addition of nearly 1 million voters.

Over 7.6 million people are registered to vote, a record high.
Automatic voter registration has led to an increase of almost 1 million Georgia voters since 2016.

We’re supposed to believe “Fair Fight,” which Abrams formed in late 2018 after losing the gubernatorial race, is responsible for registering 800,000 of those voters? I don’t think so.

While I don’t think it’s arguable that Stacey Abrams helped increase voting numbers in Georgia to a certain extent, proclaiming her as the hero of the 2020 presidential race in Georgia is overstating it quite a bit. It doesn’t mean Georgia Republicans should underestimate her heading into the January 5th Senate runoff races; it just means that some perspective is needed when discussing what Abrams has and has not done.

The only reason why Joe Biden has an “edge” in GA is fraud.

notamemberofanyorganizedpolicital in reply to Exiliado. | November 20, 2020 at 5:22 pm

Unfortunately for the President, there are a lot of (or at least enough) pro-business, socially-moderate folks in Atlanta & Savannah — two cities I have visited many times — who detest his lack of grace and manners. Maybe they/we like his judicial appointments and fear Dem-Socialism, and we voted for him in 2016, but a few pct who find his trade-by-tweet (Savannah is a BIG port) or other mal-behavior non-supportable, is all it takes.

The good part of this equation is that the R’s should carry both Senate seats.

Remember, this is a state that often attracts 2~3% Libertarian votes. And Trump barely got 50% of the GA vote in 2016.

Yuckster, I get a yuck out of Trump leading Dem deplorables around by the nose, one tweet at a time. Dem deplorables waste inordinate amount of time worked up by Trump’s tweets. Untold millions of wasted deplorable hours wasted.

If they are foolish enough to vote Biden/Harris, then they aren’t really pro business (crippling taxation).

Riigghhhhht….. because a senile old creep who has spent decades groping young girls in front of the national media, and who has been accused of finger-raping his staffer, and who has grifted tens of millions of dollars from the government while in “public service” is SO MUCH more appealing to the “socially moderate.” Give me a fucking break.

Stacey should do something truly radical…like get a real job.

She is too ugly to return to hooking.

She’s not qualified to do anything other than manual labor, and to do that she would need to lose about 200 pounds.

At the very least, Stacey should get her front teeth fixed.

You know what else is overrated and overhyped?
I wish she’d just go away!

Hideous inside and out. She drew all short straws, a perfect example of Black Liars Matter.

So she is overrated, overhyped and overweight?

And overly stupid, I really think that overly stupid is the root cause of many people’s inability to thrive on merit.

Stacey is pretty hungry on the campaign trail.

“Will lie for food.”

Why were the real crocked Gov and AG working with this Gov in her own mind?

It’s not over folks

notamemberofanyorganizedpolicital in reply to gonzotx. | November 20, 2020 at 5:24 pm

The only thing about this hack that isn’t “Overrated and Overhyped” is her appetite. Seriously, it would be impossible for me to view anyone who is morbidly obese as a “leader” of any sort. Plus she’s a whiny cry-bully.

“FYI: Georgia has had automatic DMV voter registration since 2016”

Which means these folks have VOTER ID

Where be the buffet at?

Any buffet she notices goes bankrupt.

Abrams is the product of intercourse between Idi Amin and crone Hillary Clinton. Possessing the self-reverential, pathologically narcissistic and caudillo-esque arrogance that would be expected from such an infernal union.